There’s definitely a passion for food at The Cook School.

The corridor is lined with awards and accolades with numerous cook books from local chefs and restaurants and further awards displayed in the dining room. The first glimpse through the double doors of the work stations makes the heart leap – it looks so inviting. 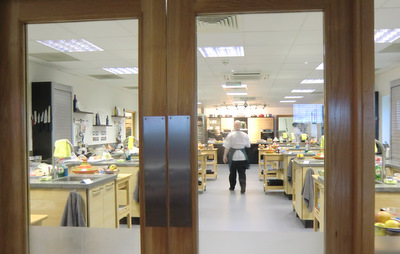 Later we discover each work station for one or two people is fully equipped with two ovens, 2 induction hobs, fridge, butchers block .. I could go on, but you get the idea, it is very well appointed!

I’d been invited to attend a game cookery course. My fellow classmates were all ages. On asking, I found a mother and daughter who had bid for a place at a charity auction; a vet whose wife had given him the course as a present for his 60th birthday; a civil engineer, several young couples and a couple of more mature husbands and wives. 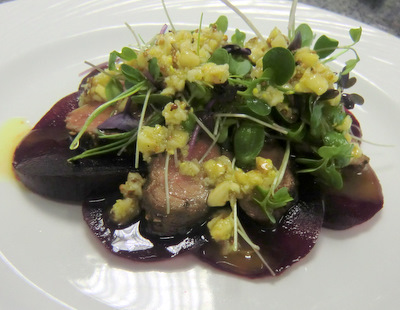 Our teacher for the day was Gary MacLean – who has an enviable track record  setting up more than 100 restaurants. We were in safe hands.

We were to cook a 3 course meal focussing on game.

The course was a carefully timed mixture of demonstrations at the front of the room and hands on cooking.

By lunchtime we’d created a starter of roe deer, beetroot and hazelnut dressing. I have to confess some pride in my plate. We’d got to grips with induction cooking (just remember to keep the pan on the hob or it won’t heat) and were shown how to make foccacia. I wasn’t quite sure whether we were supposed to make this as well, but I am guessing time constraints meant we missed it out.

I particularly enjoyed seeing the game in its feathered form and hearing how Braehead foods collect all the game from the shoots around Scotland (and now England). And where would you guess much of it goes? To supermarkets in France and Belgium! 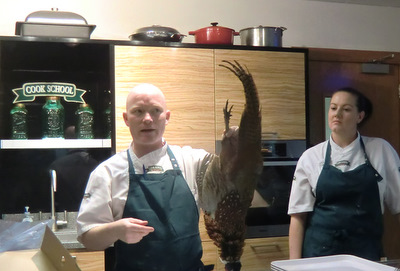 Gary McLean showing a magnificent pheasant at the Cook School

We progressed to pheasant, deftly removing the wishbone and trussing it up for roasting and so onto dessert – tarte tatin.

At the end of the day, we had the chance to sit down and taste our hard work. Interesting conversations ensued about how their particular dish was seasoned and whether it could have been adjusted. Everything we didn’t eat was carefully wrapped up for us to finish at home. 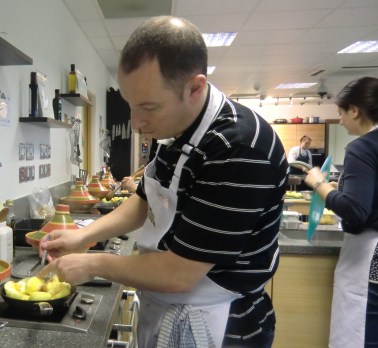 Creation of a tarte tatin

Creating an amazing tarte tatin. Ok I know this was a game course, but to me the important thing about a cookery course is learning something new and I’d never achieved a successful tarte tatin before.

Learning why trussing a bird can make all the difference to how moist it is as the heat will be applied evenly.

Finding out all about the game.

The great atmosphere and expertise of the staff.

For me, I wasn’t ready to eat at 4 pm in the afternoon – especially on a Saturday when your best beloved isn’t with you, but that’s just me.

I would have enjoyed a little more emphasis on the game and how to prepare different birds for cooking – perhaps the opportunity for a masterclass?

Anyone with a love of cooking!  Rather than buy it as a gift for someone else ask for a voucher for your Christmas present.  If you’re not too far from Kilmarnock, you can do an evening course and eat what you prepare. Evening courses are from £45, full day courses costs £130.