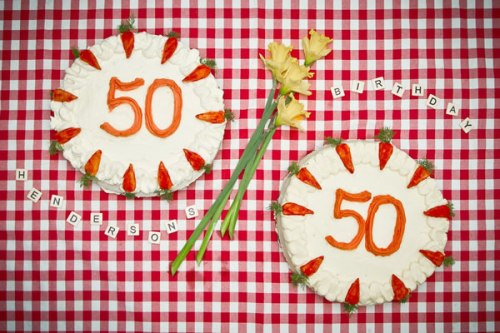 50 Days to Celebrate 50 Years in Edinburgh

This is a food festival with heart and three generations of admiration for Janet Henderson, a pioneering woman who was ahead of her time in regards to healthy eating and food production. The festival kicks off in celebration of what would have been Janet’s 100th birthday and also celebrates 50 years of Henderson’s ‘Eat Better, Live Better’ motto, which first opened its doors in 1963 on Hanover Street. The events will celebrate Janet’s life, reflect over the past 50 years and give some insight about how they are looking forward to the future.

After meeting with Simon Preston, the Festival Director, I couldn’t help but share his enthusiasm for the upcoming festivities. Fun events ranging from the Back to ’63 Launch Party (think tie-dyes, The Beetles…) to a whacky Hawaii Five-0 Beach Party (location: top secret) to Veggie Speed Eating (not dating, but you’ll be sure to make new friends) and family friendly activities. His approach to working closely with the Henderson’s – there are still second and third generations of Henderson’s running the business – was to create events to draw upon all sectors and age groups of the local community. After reviewing the 50-day calendar, it appears as though they’ve struck the right balance. Henderson’s serves such a lovely niche in the market, with, for example, grandmothers who remember when the restaurant opened now taking their grandchildren for lunch to share the experience. (If you have a spare few moments, grab a box of tissues and read some of the comments posted on the ‘memories’ page on the Henderson website: www.hendersonsedinburgh.co.uk) 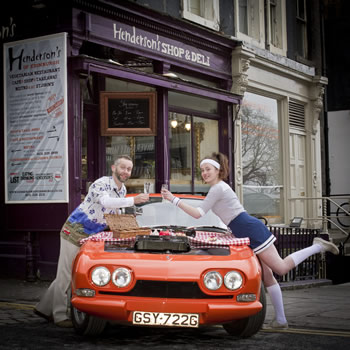 A little bit of deja vu?

Admittedly, I enjoy eating vegetarian several days per week and have had a number of enjoyable lunches at Henderson’s. However, I am embarrassed that I never knew Janet Henderson’s ‘story’ until now as to why she opened her vegetarian restaurant. Interestingly, in the 1930s, Janet traveled through Germany, Austria and Switzerland and discovered contrary approaches to diet and health then advocated in the UK. Fortunately, when she settled down in East Lothian with Scottish rugby player ‘Mac’ Henderson, she not only had seven children, but also started implementing a number of these new ideas gathered from her travels. In particular, Janet started producing veggies grown with compost rather than artificial methods. Her vegetables were so popular that she explored opening a farm shop, but opened Henderson’s Salad Table instead to showcase her produce and promote healthy eating. Back then, what seems so commonplace today, they truly were pioneers in championing healthy, local, seasonal food. For that, I applaud Janet and her legacy through her food establishments.

So, hats off to Simon and the Henderson’s. This will be a food festival that will celebrate the local community, loyal staff as well as suppliers – not the corporations that seem to dominate the national food related events. Wouldn’t it be fantastic if this one could be a model for larger and broader food celebrations in Edinburgh and Scotland to come?

For more information about the events and to buy tickets, visit: www.hendersons50.com or download the Henderson’s at 50 brochure (large PDF) 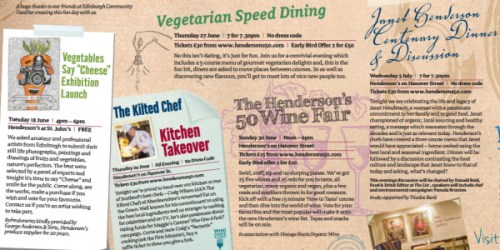 Photographs are courtesy of OhReally