As the drummer in indie-pop-rock band The Alibis, I count as the musical element of Edinburgh Foody. Consequently, I was enlisted to review ‘What’s Cookin? with Reole Shizzle,’ a CD of 13 reggae/pop tracks and a booklet of 7 recipes. Since most cookbooks don’t come with an accompanying soundtrack – and most albums don’t come with a week’s worth of meals – I was intrigued. And whilst it’s an unusual idea, I think it works.

This is Reole’s third album but his first cookbook: he’s combined the two because he feels there’s a strong connection between music and food. For example, he draws a parallel between producers and chefs, explaining that ‘adding more drums or brass sections, is like adding another sprinkle of chilli powder.’

Reole admits his recipes aren’t original but they have his take on them and the cook at home should interpret them however they wish, too. There are a range of British, Jamaican and Creole dishes including celery, apple and stilton soup, jerk chicken with coconut rice and ‘jambalaya fire,’ a recipe big enough to feed ‘the whole street.’ There’s also the most complicated sandwich you’ve ever made, a baked multi-layered Sicilian affair in a round loaf called muffuletta. Apparently Reole’s crew loved it when he made it during the album recording. 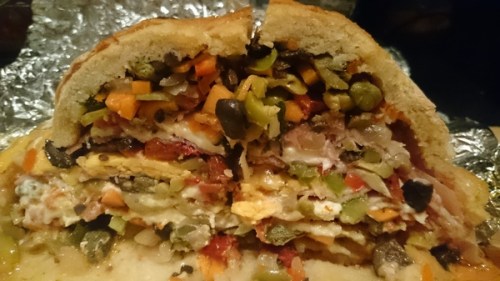 The music is chirpy and soulful, a pleasant background noise that’ll get your toes tapping and your shoulders grooving while you’re chopping, stirring and roasting – just don’t get too into it and lose a finger. I listened through a couple of times and enjoyed it, especially lead track ‘Always Got Your Back Girl’ with Sophie Mendoza; whether intentional or not, the percussion evoked images of banging pots and pans.

The next step was to listen and make a recipe at the same time. They all looked fun to cook as well as pretty tasty. Written in Reole’s colloquial style, each recipe is peppered with instructions such as ‘get creative with your presentation ya heard me!’ and ‘take this shizzle down to the crust!’ However, it had to be the muffuletta. 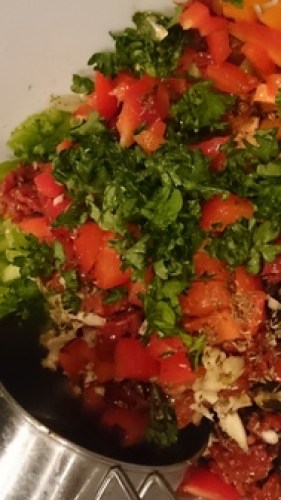 Perhaps the most unbelieveable step for this ‘sandwich’ is that preparation begins 24 hours before you eat it, to allow the salad mix of olives and pickled veg to come together. (Who plans a sandwich that far in advance?) Since we had been encouraged to take our own approach, we adapted our salad mix by swapping out celery for red and green peppers and adding sundried tomatoes. I was skeptical the salad would be nice but actually I would make the whole mix again and keep it in the fridge to add to plain leafy lunch salads. 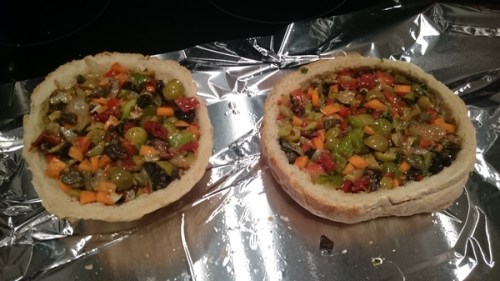 The recipe called for four kinds of mild sliced and flavoured cheese, but I got mozzarella, Boursin, cheddar and brie. In the end though having four types didn’t matter as they were all lost in a haze of briney salad mix. Next time I would opt for just one very melty cheese and I’d also bake it for longer, so the filling was hotter and the base wasn’t so soggy. I felt the whole thing was rather salty but it was very filling and it was even better the next day. I’ve summarised the recipe below – you’ll have to buy What’s Cookin if you want to benefit from Reole’s unique style! 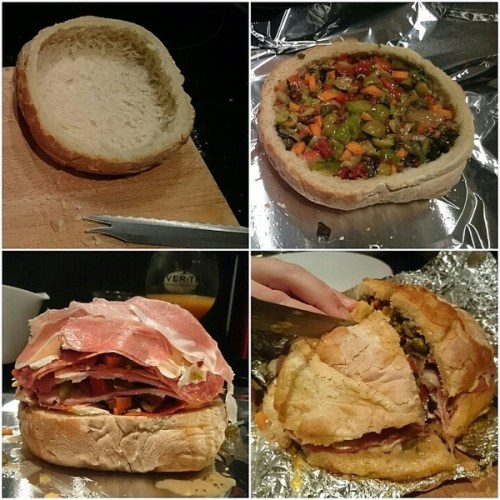 The four stages of muffuletta

Overall, the muffuletta reflected Reole’s music – interpretative, colourful and enjoyable. Having listened to his earlier work (available on Spotify), ‘What’s Cookin’ seemed to be a step in a more mature direction. And just like his food, it makes you smile. So in the words of the man himself, I recommend you grab a copy and ‘cook up some sweet music, y’herb me!’ 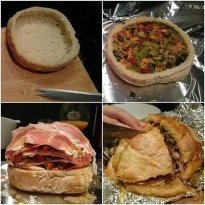 Save Print
Preparation time
24 hours
Cooking time
20 mins
Total time
24 hours 20 mins
All of the ham, cheese and olive salad mix you could ever need stuffed in a hollowed out loaf and baked to melt the cheese. Invite your friends. Bring wine.
Author: Reole Shizzle (adapted by Amy)
Recipe type: Main Course
Cuisine: Sicilian American
Serves: 4 people
Ingredients
The Olive Salad
The Filling (get creative)
The Bread
Instructions
3.4.3177
‘What’s Cookin’ is released on December 4th. Amy was sent a free copy to review.