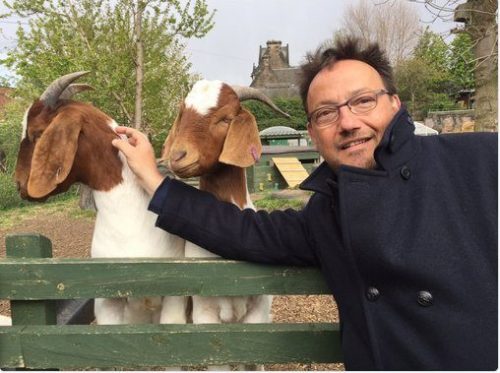 All About the Goat – Gorgie Farm’s 40th Birthday Celebrations

Kerry headed to Gorgie Farm last night to celebrate their 40th Birthday (and Fred Berkmiller’s) too.

With a menu created by Fred Berkmiller from L’Escargot Bleu and Rosario Satore from Locando di Gusti, they had generously donated their time and food in support of Gorgie Farm’s fundraising efforts.

The menu was ‘All About the Goat’. I know!  She won’t be telling her god-children! The five course menu started with: a welcome cocktail from the boys  at Arbikie; followed by Gorgie City Farm Boer Goat’s Terrine; Homemade Pasta Genovese; Beer Goat Casserole featuring vegetables from Gorgie City Farm and Newton Walled Garden; a flight of Italian and French Goat’s Cheeses; and finally finished with a very sticky Seadas, a traditional Sweet Sardinian Fritter, stuffed with goats’ cheese and smothered in honey.  All served ‘family-style’, it made for a great evening with everyone leaving well and truly full.

Pilot beers from Leith provided the beers on the night, which were all matched to complement the food.  Kerry’s favourite was the Mochaccino Stout Unfined, which accompanied the cheese course.  A sweet, indulgent milk stout, with an exclusive coffee roast, organic cocoa nibs, vanilla and lactose, she reckons it would also be fantastic to cook with. Watch out in the future for one of her creations.

If you would like to help Gorgie City Farm in their fundraising efforts, please text “FARM44 £5” to 70070, donate online or send a cheque to GORGIE CITY FARM, 51 Gorgie Road, Edinburgh, EH11 2LA