BABA – I di’n’ed and went to Heaven

Last week, I was invited to a preview of the new Levantine restaurant, BABA, that is due to open officially on 15 November in Edinburgh and it’s safe to safe I di’n’ed and went to Heaven. 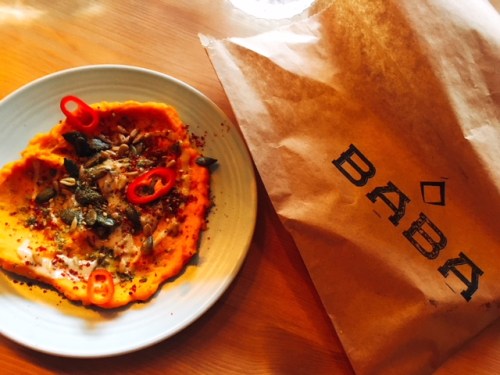 Driving by this site on my daily commute to work, I’ve been waiting in anticipation for the ‘blinds’ to go up so was ecstatic to be invited to a preview lunch with other bloggers. It’s been some time coming but you really won’t be disappointed.

The result of a partnership between Katherine Arnold and Robbie Bargh of London’s Gorgeous Group and Jonathan MacDonald and Daniel Spurr from Glasgow’s award-winning Ox and Finch, BABA adjoins the new Principal Hotel on Charlotte Square at the west end of George Street.

Entering the cocktail bar from George Street, we were greeted by the flamboyant jacketed (I WANT that jacket!) and rather lovely Robbie Bargh and invited to choose one of their beautifully, Levantine inspired cocktails, before retiring to the dining room to experience an absolute feast.

BABA’s cocktails conjure up the mystery of the Orient

The Apricot Baba-llini, with mint, honey, cumin and cinnamon and the Sufi Fizz, made with vodka, vanilla, rose, labneh, lime, cardoman and ginger tea soda conjured up the tastes, smells and the mystery of the Orient and I can highly recommend. 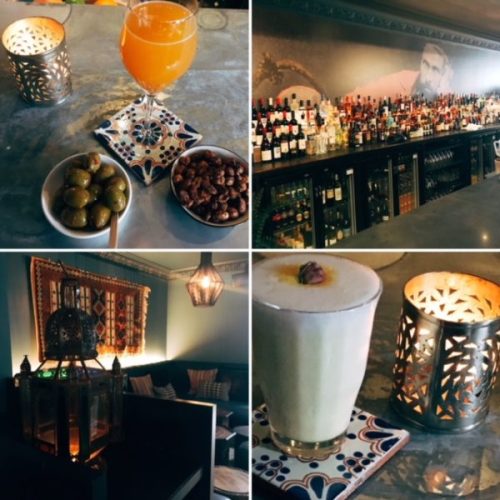 BABA’s cosy cocktail bar is a den of iniquity

The main dining room is bright and airy, with distressed walls and shutters and Middle Eastern rugs on some of the walls.  Booths, tables and a central, sharing table occupy the main dining room and there is an open kitchen where all the action happens.

Serving Levantine cuisine, this is the traditional cuisine of the Levant, known in Arabic as the Bilad ash-Sham and Mashriq, which covers a large area of the Eastern Mediterranean. It continues to carry an influentially mainstream character in a majority of the dishes today. It is found in the modern states of Jordan, Lebanon, Israel, Palestine, Syria, and parts of southern Turkey near Adana, Gaziantep, and Antakya (the fomer Vilayet of Aloppo).  In the broader family of Meditteranean cuisine, Cypriot cuisine also has strong Levantine influences.  Perhaps the most distinctive aspect of Levantine cuisine is mezze including tabbouleh, hummus and baba ghanoush.

I’m a huge fan of this food, having attended a mezze workshop run by the Original Spice Girl, Ghillie Basan in her Highland home and I treasure her book on the subject ‘Mezze, Small Plates to Share’.

Mezze is an ancient tradition, enjoyed by the Greeks, Romans, medieval Arabs, and Ottoman Turks, and is the heart and soul of modern culinary life in the Middle East. The word mezze (meze in Turkey and mazza in Syria and Lebanon) is thought to have derived from the Persian mazza meaning ‘taste’ or ‘relish’ and was designed to be savoured alongside tea, wine, beer or a yoghurt drink, with the aim of pleasing the palate, not to fill the belly.  It is a relaxing custom that can be enjoyed at any time of the day as an appetizer, snack or as a buffet spread, served in small quantities and shared at a leisurely pace.  (Taken from Mezze, Small Plates to Share – Ghillie Basan)

Our lunch was a lavish feast and I think we tried almost everything on the menu and we certainly shared at a leisurely pace.  Our lunch went on for three hours!

From the mezze menu, we tried the lemon and chilli halkidki olives, which were sweet yet tangy; baharat-spiced nuts;  cauliflower fitters, zhug and creme fraiche; and the haggis and harrisa kibbeh. The latter is a Levantine dish normally made of bulgur, minced onions and finely ground lean beer, lamb, goat, or camel meat with Middle Eastern spices. In the absence of camel meat, I loved the way they had given this a Scottish twist with the use of haggis!

The dips are all served with grilled pitta, which came in BABA branded brown paper bags. The bread is the only thing BABA buys in and is being made by a Syrian immigrant, especially for BABA. He originally started making this type of Middle-Eastern bread as he couldn’t source the type of bread he used to get in his homeland, locally.

There are eight dips on offer, I was like a child in a sweetie shop, not knowing which to choose. So I tried them all, with the exception of the smoked salmon taramasalata one. And my favourites, were the muhummara, aleppo chilli and chopped walnuts; and the labneh, (a creamy, tangy Middle Eastern yogurt strained until extra thick) with cherry tomatoes and harissa. Which will you choose? 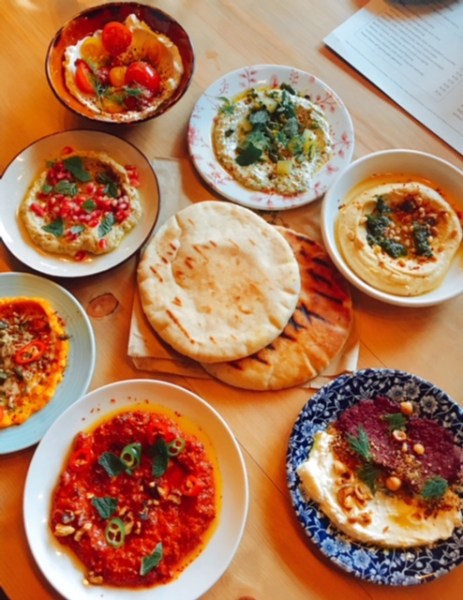 Dips all served with grilled pitta – so many to choose from

From the grill’s six menu items, I sampled the chuck-eye steak, sumac onion salad and red pepper ketchup and the grilled cauliflower, tahini, ras-el-hanout and rose, which was a complete winner and perfect for any vegetarian diner.  It had real texture and is the fashionable, new way to cook cauliflower. Also on offer was hake, beetroot, orange and herb salad; and monkfish, chickpeas, tomato, saffron, parsley and feta but I gave these a miss with my fish allergy, although they were pretty as a picture. 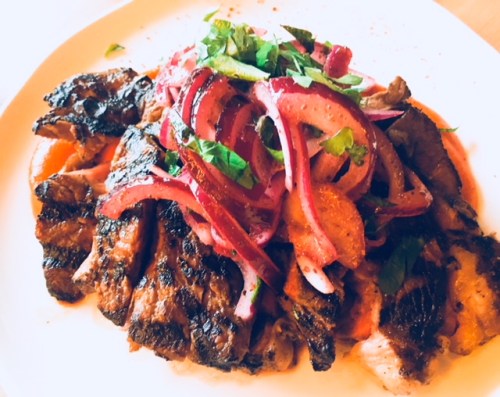 After a BABA kebab, no other kebab will do

The kebabs on offer are served with pitta, harissa, zhug, garlic tahini, herbs and pickles. Spoiled by choice, I created my own combo with a mixture of lamb and chicken shawarma. Forget those scary ones you remember from student days, BABA’s kebabs are something else. Beautifully cooked on the open grill, the meat is so tender, and it’s fun to make your own creation with the various pickles and dips. If you’re a kebab lover, you’ll be converted and only a BABA kebab from now on will suffice. 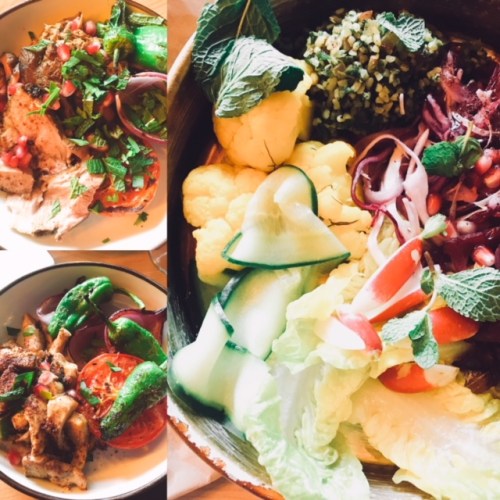 Once you have tried a BABA kebab, no other kebab will do

I can thoroughly recommend their side of ptitim, preserved lemon and harissa. Ptitim is a type of toasted pasta shaped like rice grains or little balls developed in Israel in the 1950s when rice was scarce. Outside Israel, it is typically marketed as Israeli couscous, Jerusalem couscous, or pearl couscous. Don’t be scared if you can’t pronounce it, just ask for the giant couscous ‘side’.  I tried it with the chuck-eye steak.

By this stage, we were all well and truly stuffed.  In fact, I wondered if we weren’t being fattened up for a sacrificial offering, there was so much food on offer.

Save some room for desserts

However, try and save some space for dessert. The tip here is not to fill up too much on the bread that comes with the dips and kebabs. 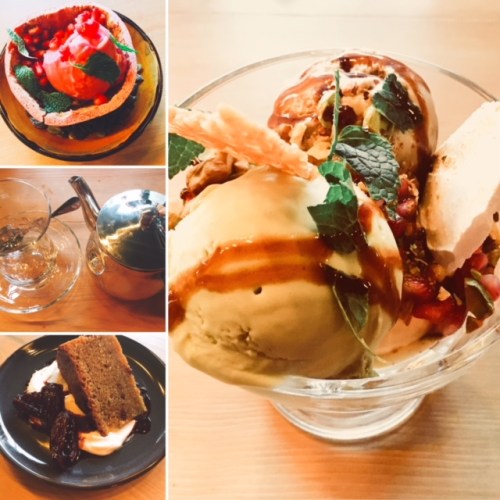 BABA’s desserts – too many delicious ones to choose

Between our table, we tried three of the five desserts on offer. The BABA sundae with three different types of ice-cream is pure dreaminess, whilst the homemade pomegranate sorbet with mint is perfect for those wanting a lighter option. I wasn’t a huge fan of the olive oil sponge, with medjool dates, molasses and yoghurts but that’s a personal preference.  My neighbour cleared her plate!

A wine list offering off the beaten track – Be adventurous

And one  final mention, their wine list, chosen by their General Manager, Anoushka, promises some really interesting offerings, including wines from Lebanon, Cyprus, Greece and Turkey. Be adventurous and go off the beaten track; like with like really does work.

I particularly loved the ‘pink’ Beyaz Kalecik Karasi from Turkey. This off-dry rose, with notes of wild strawberry and pink grapefruit paired so well with all the food, whilst the Prieure Ksara Rouge from Lebanon worked well with the chuck-steak. For those wanting a more full-bodied red, try the Reserve du Couvent from Bekka Valley in Lebanon. Made from Syrah, Cabernet Franc, Cabernet Sauvignon, from Lebanon’s oldest winery, it’s incredibly rich, with dark fruit, herbs and spice.

BABA certainly delivers on all levels – great hospitality, a different wines’ list, a wonderful dining space and fabulous sharing food that pleases all the senses. I predict that BABA will be the new place everyone wants to get a table at – so get in quick.  I LOVED it so much I’ve already booked my return visit.

Kerry dined as a guest of BABA