Clark and Lake Charcuterie and Bar – raclette or your life

Raclette. There are a couple of places in Edinburgh where you can get this most fabulous of melted cheeses. Amy and I headed to Clark and Lake the last night in January to talk about an upcoming post and get in on there special January raclette offer (sorry guys – you missed it). 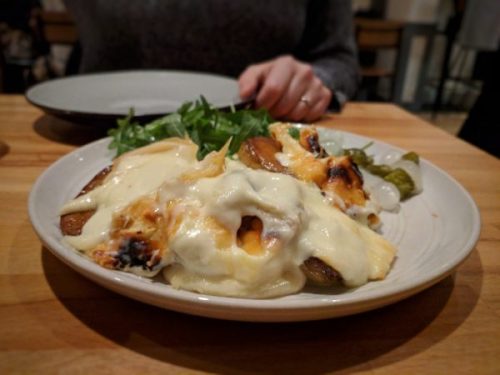 Raclette. Oh my, was it good! (Stop drooling.)

I’ve wanted to go to Clark and Lake for some itme but have found myself in the Fat Pony instead. I’m not up in that area of Tollcross much anymore. There was a time…

When I walked in, I was reminded of the time when I more or less lived in Tollcross and spent a lot of time in what’s now The Cuckoo’s Nest. The structure of the units are the same (and the same as Peter’s Yard Stockbridge, now I come to think of it). There are two doors to get in: take a left down the stairs when you enter to go down to the cellar and the toilets. The main unit is straight through the second door. The long room that is Clark and Lake goes in a uncluttered wood, white and stone with cosy leather seats along the walls.

That means you can focus on the menu and the wine. We ordered a Crianza, raclette – which comes with lovely potatoes, charcuterie board and, because a table next to us had it and it smelled lush, the pork and beef meatballs. Also whitebait. I’m greedy.

We were in for the deal so the £8 raclette was free with the wine and hte charcuterie board. It was supremely tasty and we were very brave to actually share it. We could easily have had one of those each. Bubbly cheese over soft, buttery potatoes. Oh yes! 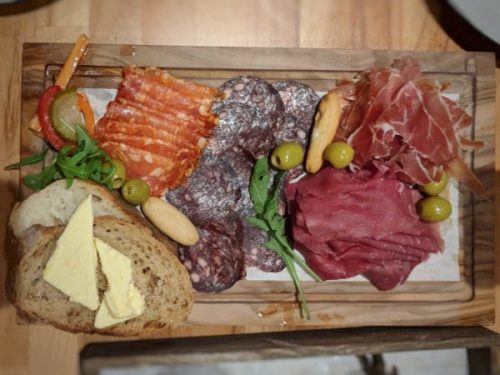 The salt-cured beef was glorious in its dark red majesty and I really liked the salami too.

I wanted the charcuterie board with the cheese but we’d cleaned the cheese plate when the charcuterie board arrived. (I like melted cheese and meat together.) We’d chosen well: blood and chocolate salami was rich and dar, the salt-cured beef was like what I always hope roast beef will be like, the chorizo was delightfully tangy and the parma ham paper-thin and creamy.

The rioja we were drinking had raspberry, wood and tobacco notes according to the description. I got red fruit and enough body to stand up to the cheese and meat without becoming over-powering or cloying.

It was a cold night so we needed the three enormous meat ballls in their warm tomato sauce. They were fantastic. The texture was soft, the flavour rich. A perfect advert for mixing pork and beef mince. 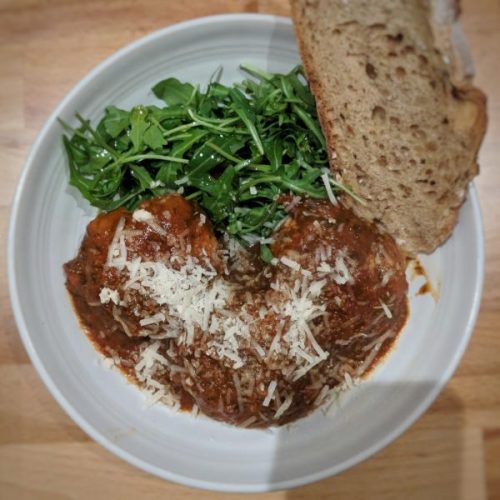 Now that’s a meatball. Or three. 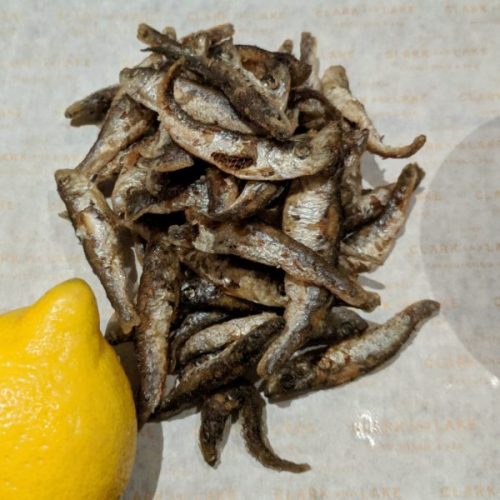 To get the courage we needed to go out into the cold again we finished witha small glass of Fleurie and shared three truffles (white, milk and dark) which came served on salted caramel sauce. The white truffle had a subtle hint of licorice that I found utterly alluring until I realised that was my lipsalve. With neautrally flavoured lip grease, the dark truffle was my favourite. It went well with the fruity and cheerful wine.

Clark and Lake Charcuterie and Bar