You know when you’re invited to an event at l’escargot blanc in Edinburgh’s West End that it’s going to be a good night.  With its friendly downstairs bar, Bar A Vin and its lofty upstairs restaurant with its lively French atmosphere, it always provides a down-to-earth welcome with hearty food in an unpretentious setting. 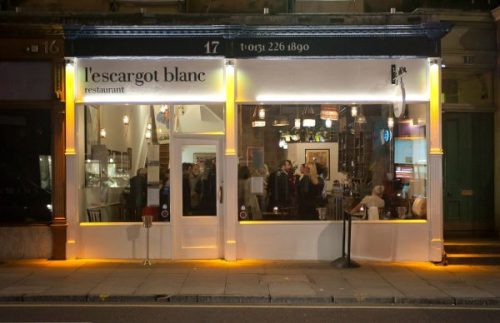 Fred Berkmiller, chef/patron of this restaurant and l’escargot bleu on Broughton Street, has been serving up food at ‘blanc’ for the last 20 years.  He is passionate about cooking the very best Scottish with a French twist and goes to great lengths to source and work with producers, championing the very best of Scotland’s larder. 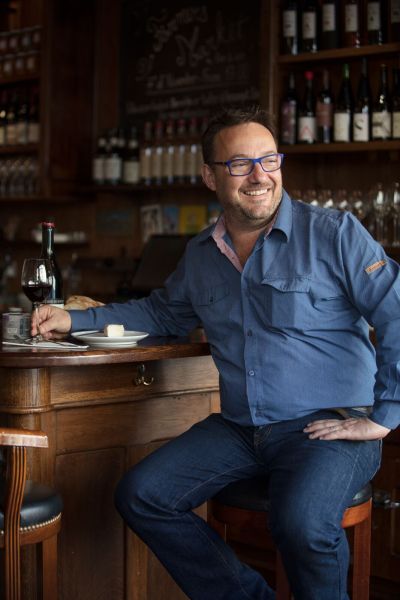 The evening was the first in a series of events celebrating the ‘Scottish larder’ and its great produce.  I was here to taste Hebridean hogget from Ardoch Hebridean Sheep, native Shetland ‘kye’ beef from Uradale in Shetland, and the first crops of vegetables from l’escargot’s Newton Walled Garden, just outside Edinburgh.

The personable, quiet, and mild-mannered Fred, had many of the gathered audience straining to hear what he was saying, with his welcome speech from behind the bar, but he assured us he can ‘kick-arse in the kitchen’ when required.

He recounts his ambition with his Newton Walled Garden to achieve growing herbs, fruit and vegetables 12 months of the year, and to be able to supply both restaurants in two years.  Although still in its first year, whilst the garden may not yield huge quantity, there will always be variety and quality. Although not a gardener, you could tell his passion and excitement for the five to six beds that have been created, the poly-tunnel and he was excited to be sharing the white and red cabbage, pursalane (an edible weed that has many health benefits), rocket and spinach that graced our dinner plates on the evening.

Accompanying Fred’s vegetables was Hebridean hogget, from a black-fleeced, multi-horned sheep (they can have from four to eight horns) farmed by Jack and Morna Cuthbert of Ardoch in the Ochil Hills outside Kinross.

Two-thirds the size of normal sheep, Jack told us that by 1974, this breed of sheep were endangered with just 284 left, making them ‘rarer than Sumatran tigers.’  As Jack explained to preserve a rare sheep, ‘you need to eat it’ and a concerted effort by the Hebridean Sheep Society to ensure this rare sheep survived, meant that since 1994, 45k sheep have been registered and it’s now seen as a commercial market.

With a flock of 200, with 90 ewes lambing this year, it appears that there’s an appreciation for this produce from young to old and from people who have an appreciation of good food. Each sheep can produce 12-24kg of meat, so there needs to be a flexibility if you’re the chef that’s wanting this produce.

Next up was Jacob Eunson of Uradale, a blond-haired young Viking, who like Jack and Fred are passionate about their produce, yet modest in his approach.

Jacob, left school at 16 years, to pursue a life in farming, but not before training as a butcher and taking over the running of the farm from his father, who has developed glaucoma.

While he says he has ‘done a fair bit’ since taking over the farm, he owes much of what Uradale has achieved to his father, who created a ‘longing for rare breeds.’

Sheep and cattle graze over large areas of natural pasture from the heather hills to herb-rich green coastlines. Jacob handles all the meats himself with orders being prepared weekly for customers ranging from Scalloway Hotel to Lidgates of London.

The menu is a celebration of all these produce.

First up was hogget caillette, which is a traditional recipe from Tours where Fred is from and is a snall haggis-shaped casing of offal and hogget. There was a debate among our table, as to whether this is a faggot but the description of ‘hogget caillette’ gives it a much more sophisticated air. It is served with mogettes coulis and haricots, lamb jus and Newton Garden winter purslane, straight from Fred’s garden. 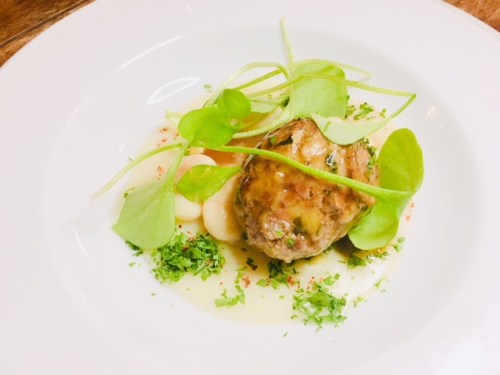 Next is the Native Shetland kye, served with red and white cabbage, a Shetland black potato and garnished with a beautifully, coloured pansy.   Also served was a braised shin of Native Shetland Parmentier, or what you and I would call ‘cottage pie’, served family style in a brass serving pot.   Sadly, we only got a wee taster of this but I could happily have devoured the whole dish myself.   It was pure comfort food. 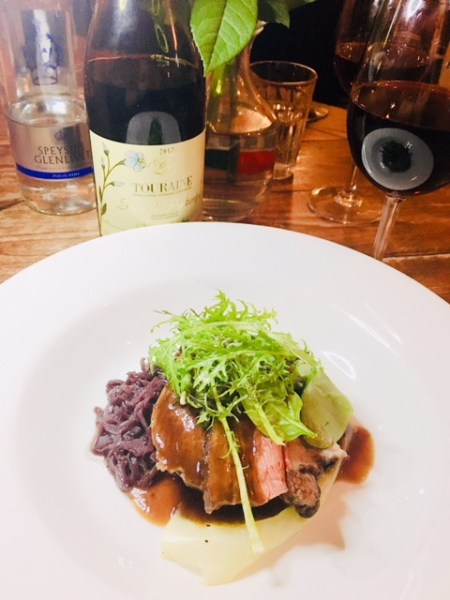 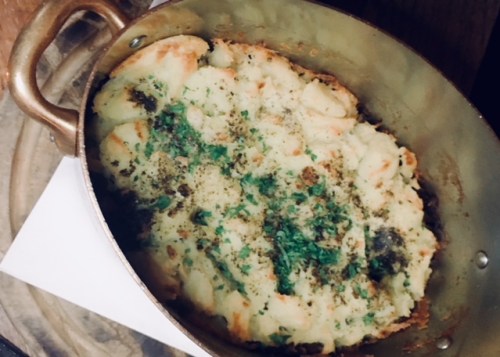 Native Shetland Parmentier, or what you and I would call ‘cottage pie’,

Ile Flottante had me in seventh heaven

For dessert, we were served Ile flottante with crème Anglaise, a quintessential French dessert of mallowy meringue ‘islands’ floating in custard. A dish I haven’t had since the 80’s when our neighbours French au-pair taught my mother how to master it, I was in nostalgic seventh heaven. 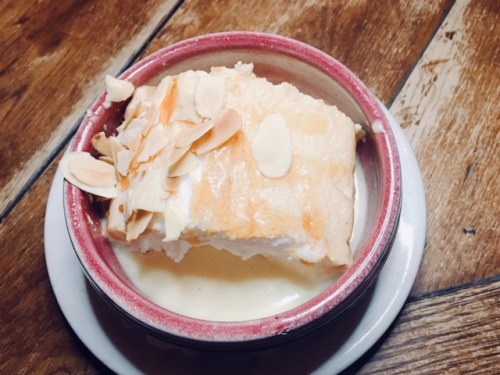 Ile flottante with crème Anglaise had me in seventh heaven

The first in this series of suppers at l’escargot restaurants was a great success and a little bird tells me that there are others scheduled this year so keep an eye on l’escargot’s social media channels.

A date for your diary – Language Exchange at Bar a Vin

In the meantime, why not put Tuesday, 26 February in your diary for a ‘Language Exchange’ at  Bar a Vin (the downstairs bar at l’escargot blanc) from 17:00-20:00. And even if you don’t speak  French, Italian, Spanish, German or Mandarin Chinese well (or not), I’m sure it’ll be a lot easier with a few glasses of wine.   Admission is free and all levels are welcome.   Had I not had a prior engagement in my diary, you might have found me attending to, in the hope of practising my rubbish español or français.