Coffee should be dark and bitter.

It’s early on a summer’s morning and I have just ordered an Americano in a rather nice cafe in a suburb of Stockholm. The barista makes a double espresso, pours it into a cup and tops it up with filter coffee. The result is extremely strong and packed with caffeine. There’s a good reason for why I don’t send it back.

The Swedes like their coffee strong. Very strong. American coffee is derided for being tasteless and weak and Italian coffee for being served in far too small cups. What you really want is a lot of strong coffee, possibly with a splash of milk. Our love of coffee is such that when I grew up coffee by the kilo was the most popular prize for quizzes and raffles.

There are three main types of coffee:

The resulting liquid, whichever method you use, should be black and bitter. With your coffee you can indulge your sweet tooth, for example by having a chocolate ball. (You’ll find a recipe for this below.) With my extra-strong Americano, I have a massive cinnamon bun since this is breakfast and not elevenses. I will not sleep for the next three nights. 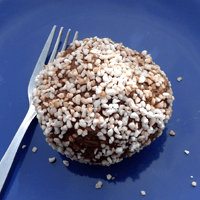 Eat. But not too many at a time – chocolate balls are yummy, safe for children to make, and store well in the fridge for up to a week, but they are not at all healthy.