Turkish delight: starch, sugar and the scent of flowers

Turkish delight. Home made, no less.

I was in Nargile for a slap-up feast in June. At the end of a meal, when we were all fit to burst, the temptress waitress brought in a small plate of Turkish delight with the bill. It was fabulous and I ate several pieces. I was reminded that good Turkish delight is a beautiful thing that I wanted to learn how to make. I’m talking about the original, gelatin-free version. It makes a nice gift and is my sweetheart’s favourite candy. So I scoured the Internet for instructions and set out to learn how to make perfect delight. Here is what I learned. 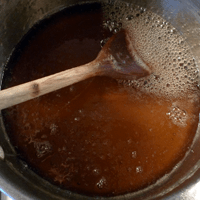 One: make a sugar syrup.

Turkish delight is made by mixing sugar syrup at the soft ball stage with a stiff corn-starch glue and cooking the resulting gloop for an age. That’s it. The traditional version is thickened by starch and partly caramelised sugar, nothing else. Modern versions sometimes use gelatine to set the turkish delight. It can give a less opaque sweet and might also be easier to use than a traditional method. I needed a vegetarian recipe, so starch and sugar it was. 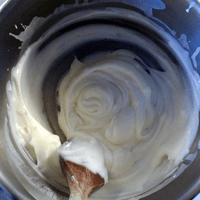 With some recipes the details aren’t so important. With sweets – fudge, tablet, nougat and turkish delight – it is all about the details. The temperature of the sugar syrup does make a difference, as does the proportions of starch to sugar syrup. I looked at a lot of different recipes, compared them, read comments and feedback and then settled for a general one on The Foody UK & Ireland. I still had problems, and the first one was this:”Reduce the heat and simmer, stirring often, to prevent sticking, for about 1 hour, or until the mixture has become a pale golden colour.”
You see, I used organic, golden caster sugar so the syrup was golden to start with and didn’t get any more golden even though I kept stirring for an hour and a half…

3. Make sure you can source all of the ingredients 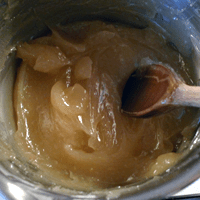 I was deeply disappointed when I found that my local Sainsbury no longer carried rose water and, to add frustration to annoyance, was out of corn starch on the day I decided to make Turkish delight. The lesson: prepare.

4. Use a sugar thermometer

The soft ball stage is not that difficult to identify but with a sugar thermometer you know when you’re there. This is tricky a recipe enough that anything that takes the guesswork out of it is helpful.

Turkish delight isn’t all roses and oranges. You can flavour it in many different ways. I added almond extract and pistachio nuts to half the mix and orange flower water and red food colouring to the other.  Rose water, mint extract, lemon and orange are other common flavours. The base has a faint sugary–starchy flavour that makes a good base for flower flavours but it presents stronger fruit flavours well too.

6. Bake yourself out of a sticky situation

You’ve followed the recipe carefully but after 12 hours of setting, the delight is still too sticky to cut into squares. That’s what happened to me. There are two solutions.