National Cupcake Week (13th to 19th Sept) is just around the corner and what better way to celebrate than by making a batch of classic Red Velvet Cupcakes?

Often called the Devil’s Food Cake, the origins of Red Velvet Cake are have been shrouded in myth. The earliest recipes date back to the 1920s when boiled beetroot would be added to the cake to give it its glorious red colour, nowadays we tend to use food colouring. It can be difficult to get the really red colour with liquid food colouring. I’ve used recipes that ask for 6 tbsp of food colouring when even with the whole bottle included they still come out reddy brown. To avoid the hassle I use Sugarflair sugar paste colouring in my cakes as it’s stronger and gives the guaranteed colour you want. 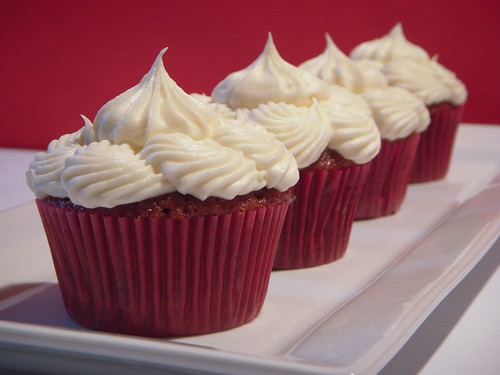 The unsweetened cocoa, buttermilk and vinegar included in this recipe means your cakes will not taste as sweet as traditional vanilla cupcakes. This is balanced out with a cream cheese icing which is both sweet and tart at the same time. Also don’t panic if your cakes turn out a little dense, you haven’t overbeaten the flour. Traditional American cupcake recipes such as this are much denser than more the traditional British fairy cakes we are used to.

For the icing;
• 300 g cream cheese (should work out to be a whole tub of Philadelphia cheese)
• 60 g butter at room temperature
• 1 tsp lemon juice
• 1 tsp vanilla extract
• 340 g of sifted icing sugar

Preheat your oven to 170C or Gas Mark 3 and line a muffin tin with 12 muffin cases.

Using either a stand or hand mixer, cream your butter until it is light and airy gradually adding in the sifted caster sugar. When the sugar and butter are completely mixed together add your egg and continue to mix until you have a smooth mixture.

(If you are using a liquid food colouring mix the cocoa powder with the food colouring together in a separate bowl in to a smooth paste before adding to your main mixture.)

Add the cocoa and food colouring and vanilla extract to the main bowl and blend well until you have a smooth red mixture. You can optionally add a little more red food colouring here if you feel your cakes aren’t red enough. Add some of the flour and mix then add some of the buttermilk. Alternate this way until both have been fully incorporated in to your cake mix. Separately add the bicarbonate of soda and the vinegar together before throwing this in to your cake mix, blend your mixture for around a minute more before equally dishing out the mixture in to the waiting muffin cases.

Place your cupcakes in the middle of your preheated oven for 20 to 25 minutes, use a skewer to check if your cakes are cooked in the middle before removing them from the oven and letting them cool in the pan for 5 minutes before placing them on a cooling rack.

For the icing cream the butter, cream cheese, lemon juice and vanilla extract together until equally combined then gradually add in the icing sugar a little at a time. You can either smear this icing over your cupcakes or using an icing bag to pipe your icing on.