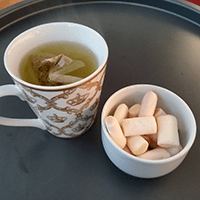 Liquorice tea and marshmallows – at-home afternoon tea for the child in me.

Marshmallows speak to the child in me. Their sticky puffiness and sweetness, the faint scent of vanilla, the slightly floury outside, all melting into goo in my mouth. The way the air bubbles in the mallow pops when you tongue press them against your palate. Mmm.

Marshmallows are a bit of a guilt pleasure of mine. The marshmallows in my local supermarket are made with gelatin, usually beef gelatin. Since ours is a vegetarian, bordering on vegan, household, I don’t eat them very often. There are great vegetarian and vegan options to supermarket marshmallows, often rather lux in flavour and shape. There’s a very definite place for square gourmet marshmallows, and I’m delighted that they exist, but there’s also a place for a more everyday mallow experience. 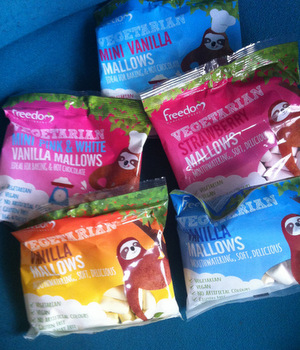 I was excited when asked to try out Freedom Mallows vegetarian marshmallows and asked myself what they would be like. Would they have the right texture and flavour? Would they add to my arsenal of sweets both of us can enjoy at home? Would they be more like my childhood’s marshmallows than the ones I’ve eaten as an adult? To each question, the answer is yes.

Anyone who’s looked for veggie versions of the sweets they grew up with knows how frustrating it can be. Veggie cola bottles are either too sweet, or don’t have the right texture. Texture is a common problem. We want the texture we’re used to. Exactly. Freedom Mallows gets as close as I think they can: they pop, they melt, and they stretch to sticky strands if you pull them apart. I put one vanilla flavoured mallow on a pickle fork and toasted it over a gas flame. It puffed up a little bit but burned quite quickly. That wouldn’t stop me from toasting them: you just need a little bit of technique to get the same melty, sticky effect. They are a good size, and the right consistency, for putting on hot chocolate too. 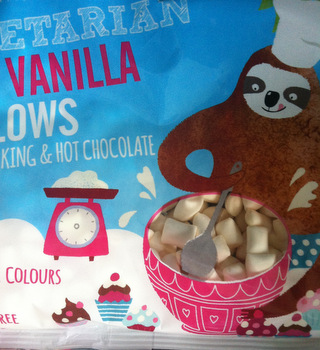 You can even get mini ones – perfect for cooking and drinks

The flavours are lovely: the vanilla is strong, sweet and rich, and the strawberry flavour has a nice strawberry smell as well as flavour. (I so not remember the marshmallows I grew up with having different flavours, only different colours. Distinct flavours is a very positive improvement.) They taste right, they have the right mouthfeel, even down to that slightly gritty feel you get from the flour that stops the mallows from sticking together. They are gelatin, dairy, egg , wheat and fake flavour and colouring free, which is all good.

At £2.50 per 75 grams, Freedom Mallows are not cheap. For veggie marshmallows, however, they’re not expensive. Marshmallows, like any sweets, are once-in-a-while treats, not things you eat everyday, so I think they’re worth it.

Harvey Nichols. Edinburgh and branches of Holland and Barrett stock Freedom Mallows, or you can buy them online.