Whilst for me August in Edinburgh means seeing as much culture as possible, it’s also a great excuse for catching up with friends and taking time to enjoy the wonderful eateries, street food and tea establishments that Edinburgh has to offer.

So the Fringe has started in earnest today and the city’s so busy. In fact the influx of tourists seems to have been happening for the last month. So sometimes there’s only one thing for it and that’s to escape the masses by heading off for afternoon tea.

That most quintessential of English customs has taken on a life of its own of late, with a surge of popularity and there’s no shortage of places on offer to enjoy it in Edinburgh. 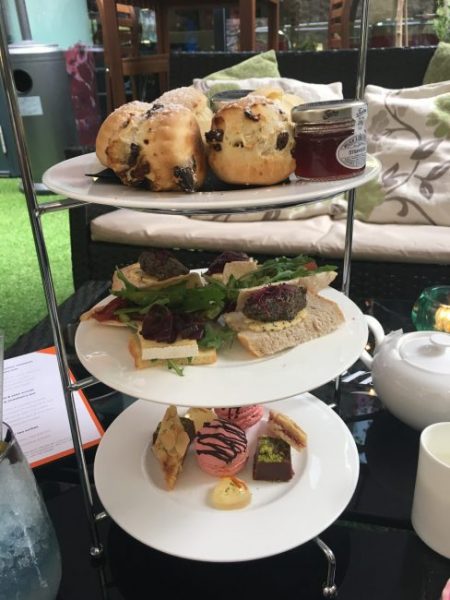 Whilst the custom of drinking tea dates back to the third millennium BC in China and was popularised in England during the 1660s by King Charles II and his wife the Portuguese Infanta Catherine de Braganza, it was not until the mid 17th century that the concept of ‘afternoon tea’ first appeared.

It was introduced in England in 1940 by Anna, the seventh Duchess of Bedford. The Duchess would become hungry around four o’clock in the afternoon. The evening meal in her household was served fashionably late at eight o’clock, thus leaving a long period of time between lunch and dinner. The Duchess asked that a tray of tea, bread and butter (some time earlier, the Earl of Sandwich had had the idea of putting a filling between two slices of bread) and cake be brought to her room during the late afternoon. This became a habit of hers and she began inviting friends to join her.

If it’s good enough for a duchess then it’s good enough for me too. With this in mind and to escape the throngs of people on the Royal Mile and George IV Bridge, I headed to the new Tanqueray TEN Terrace serving cocktails and afternoon tea at the G&V Royal Mile Hotel Edinburgh (formerly the Missoni Hotel) with my friend Emma, who is not only one of the best baking friends I have but is a bit of an afficionada when it comes to afternoon tea.

Served on the small secret terrace hidden away down a cobbled passage just off the Royal Mile, it also shares its space with The Deacon’s House cafe below. Whilst it has the potential to be a little hideaway, the reality is this isn’t the case when you have an out of control toddler screaming at the top of their voice at the cafe below, which doesn’t make it conducive to sipping cocktails and catching up. It’s also open to the elements and whilst there are big parasols, I’m not sure what would happen it it rained. Nonetheless our lovely Spanish waitress Lupe’s enthusiasm more than made up for the toddler.

On offer at G&V are kooky and wonderful delights, some which work better than others and served in a somewhat strange order. They can be enjoyed with a choice of tea or a cocktail.

Starting with a chamomile tea sorbet, served in a mini wafer cone to cleanse the palate, this was followed by a rather weird yet delicious liquorice pannacotta, served with a grapefruit compote and candied disc and a Tanqueray No Ten and cucumber gazapacho, which was too alcoholic and ‘gloopy’ to work. We both felt the sorbet would have been better served after the gazapacho. 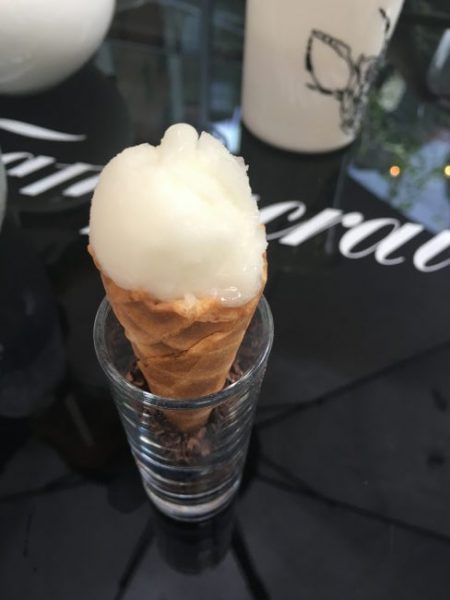 This was followed by a slate of spiced pork pastry bites and a hot smoked salmon, dill cream and candy beetroot. As Emma doesn’t eat red meats and I’m allergic to fish, we swapped. My pork bite was delicious but probably one would have sufficed.

The main event consisted of sandwiches of brie, red onion chutney and rocket; wild mushroom pate and rosemary butter; and bresola, asparagus and parmesan in a mini pitta.

The homemade fruit and plain scones were made to order, and we were warned would take 20 minutes to prepare, served with clotted cream and Tiptree strawberry jam. Good things come to those who wait. They were warm and doughy but I would have liked to have been offered a choice of different jams!

The sweet plate consisted of an orange curd macaroon & dark chocolate;  almond frangipane, raspberry jam &  lime zest; my favourite, a dense chocolate & pistachio fudge, which was more like a brownie; and a Tanqueray Negroni jelly & candied orange. We debated how we would pick this up as it was a circular blob on the plate but it had the consistency of a jelly sweet rather than the type of jelly you might get served with ice-cream. I’m not sure this last one worked. 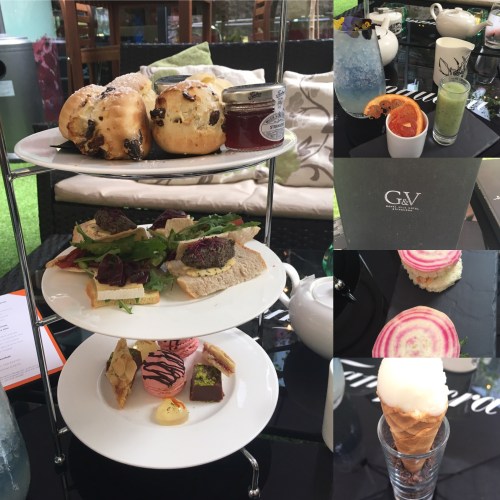 The G&T at G&V Hotel, Edinburgh

For me the star of the event was the beautifully visual L’eau du Coco cocktail, which was a Grey Goose vodka, with jasmine, white chocolate, lemon, sugar, and bitter lemon served over crushed ice in a tall glass, decorated with mini edible pansies. I also had a refreshing pot of Fantasia tea, a rosehip, orange hibiscus, apple and sunflower petals blended with blood orange to give an intense flavour and vibrant colour. 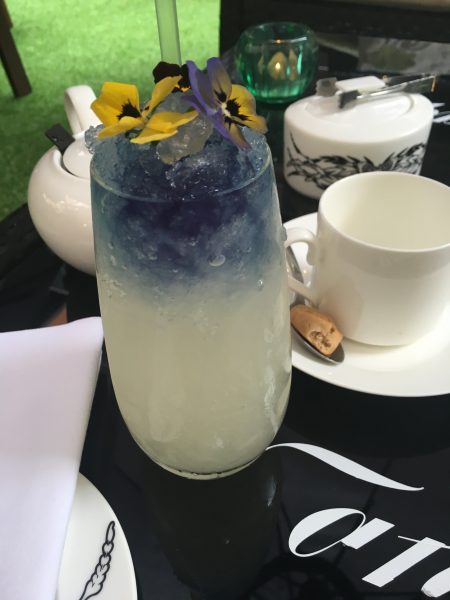 With its personalised, friendly service the Tanqueray TEN Terrace offers a good place to escape for great cocktails and afternoon tea with homemade scones, but sadly you can’t order the option for no screaming children in the cafe below!

And if you’re looking for other places to escape for afternoon tea during the festival, here are a couple of Emma’s and my favourites. Tea at the Colonnades at the Signet Library (£30) is a regular haunt annually for many festival visitors. Catch some of the free performances on the Royal Mile whilst you’re at it.

Good for the Traverse Theatre, Usher Hall and Venue 150 at the EICC, The Sheraton has their ‘3’s company tea’ (£27) having teamed up with No.3 London Dry Gin to create a refreshing afternoon tea menu. Best served with sunshine, as they have a fabulous terrace, it’s is raining, they also have a delightful indoor space to enjoy your tea. As well as a heavenly array of sandwiches and sweet treats, this seasonal speciality is served with either a No.3 Gin Cocktail – made with homemade cardamom and coriander syrup, orange bitters and fresh pink grapefruit juice – or one of their many enveloped or loose leaf teas, traditionally prepared at your table. It’s a real theatre and their previous Mad Hatter’s Afternoon was a real showstopper.

Afternoon tea at the Sheraton is a theatrical affair

If you really want to escape the festival, head to Prestonfield House, which is Emma’s go to place for afternoon tea every time. I’ve yet to try it but I could be persuaded. Served by the side of a roaring log fire which might even be necessary in our non-existent summer, there’s also the alternative of dining in the rose-filled gardens if the sun is out or the whimsical gothic tea house. From £25 – £35, traditional tea to a champagne option is on offer.

My ultimate favorite, and I’m almost loathe to share it with you, is Anteaques. It’s great if you’re seeing shows around George Square Gardens or at Zoo Southside.

A traditional tea house and antiques store, they specialise in a wide selection of fine loose teas and a unique collection of antique tea accompaniments, furniture, silver and curios. It’s a small quaint place owned by a warm, eccentric Frenchman, Cedric. It’s not the full-blown tea affair but they do serve scones with clotted cream and an amazing choice of jams including rose and lavender and the best lemon tart you will have anywhere. This is my hidden gem.

And finally, if all you’re hankering after is a cup of tea, head down to the Festival Chill Out Zone at Neal’s Yard Remedies on Hanover Street for a complimentary herbal tea infusion or delicious smoothie. You could also book in to one of the complementary therapists if the stresses of the Fringe are taking their toll.