Over the last few weeks, Edinburgh’s been the place for cocktails. There’s a shaking and a stirring. One of the reasons for this is Tennessee Calling, a Jack Daniel’s-based cocktail competition. Mixologists all over Scotland have been competing, hoping to get on a shortlist of ten for the final judging. Last week, the Edinburgh short-list entries were announced. I visited one of them, Kaiko Tulloch at Lucky Liquor Co, to learn about – and try – her cocktail. 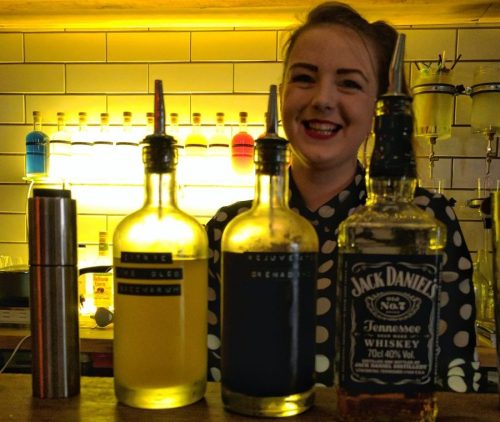 Kaiko Tulloch, the brains behind the Jack Rising, with the ingredients that make up the drink.

Lucky Liquor is one of my favourite cocktail bars. It’s tiny and friendly. The bar uses a restricted list of base spritits in combination with home-made liqueurs and ingredients to create an exciting cocktail menu. The second Tuesday of the month they are the venue for Hush Hour, where people enjoy a drink and a book. (Strictly no talking.) Their bottle-aged Brooklyn is fabulous, and that gets us smoothly back on to American whisky.

This year, the Glasgow Sessions – talks on creativity and entrepreneurship for bartenders – and the Tennessee Calling cocktail competition help Jack Daniel’s inspire and educate the next generation of bartenders. From the ten Scottish finalists, one winner will travel to their distillery in Lynchburgh and also get a chance to develop and host and event with the team behind The Dead Rabbit in New York (the world’s most awarded pub).

Jack Rising is inspired by Jack Rose, a cocktail made with applejack (an apple-flavoured booze), lemon juice and grenadine. It’s pink, fruity and classic.

To make Jack Rising, you need:

Stir with plenty of ice and

Before I even tasted it, I was intrigued. What is citric lime oleo saccharum?  How do you rejuvenate pomegranate cordial? How does Laphroig fit? 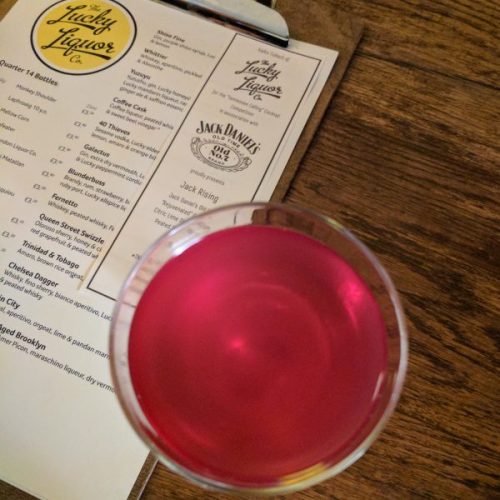 Look at that colour! It has the gorgeous pink of the Jack Rose, a classic cocktail made with applejack and grenadine.

Kaiko (Caitlin on her passport) explained that she was interested in sustainability, one of the emerging themes at the Glasgow Sessions. Jack Daniel’s take sustainability seriously: they recycle and re-purpose something like 99% of their waste. It’s a planet-saving activity that should start at home: Kaiko looked around the bar to see what they were wasting. She found squeezed limes. Cocktail bars use a lot of citrus fruits and the skins are often discarded. She decided to use them to make oleo saccharum, a lime syrup. Peel and sugar are mixed, allowing the sugar to draw out the oils in the peel. It’s a traditional method for preserving the flavour for when the fruit is out of season. To help it keep and add more acidity, Kaiko added a citric acid solution. The resulting liquid is deliciously limey and viscous.

Taking another look around the bar, she found oxidized red wine. It’s no good to drink but Kaiko used it to make ‘rejuvenated’ grenadine with pomegranate juice, sugar, maraschino syrup (what’s left behind after the cherries are used), beetroot vinegar (re-used from sister bar The Last Word), rose water, vanilla and carob molasses. The result is delicious: intensely fruity, not too sweet and with a lovely earthiness from the beetroot. It’s a deep, rich red.

The Laphroig mists the inside of the glass to add a hint of smoke to bring things together, but not so much that it takes over.

The very first impression is a lovely scent of smoke. The first sip offers something quite different. The Jack Daniel’s flavour comes through strong but its sweetness is tempered by the oleo succharum and the grenadine. There’s a hint of earthiness, of fruit and depth from the grenadine. It all comes together just beautifully. It’s balanced, complex, totally delicious. I could drink it all night. It’s available at Lucky Liquor this month: go try it! And take note how it’s served. 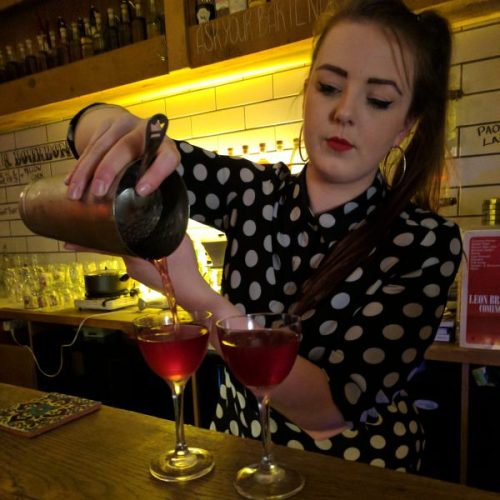 Making the drink wasn’t enough. Using discarded serviettes and coasters, Kaiko made her own paper, embellished with rose petals, basil, poppy and other seeds, to make coasters for Jack Rising. I have two in my pocket because they can be planted. With a bit of luck, there will be basil in the garden next year.

As we were chatting, I mentioned how much I liked the Rum-tum-tugger, one of the drinks featured on the last menu. It turns out that it  was one of Kaiko’s too. We have very similar tastes. She likes drinks ni the traditional mould, with few ingredients, loves smoke, enjoys Tabasco, has a thing for vinegar and savoury flavours. All good things, in my book.

Before we left, I tried another of Kaiko’s creations, the Coffee Cask. It is one of the best coffee-flavoured cocktails I’ve ever had. The flavours are clean, grounded, rounded and moreish. My companion for the evening had a Yuzuyu which positively sparkled with citrus high-notes.

It takes skill to mix a good cocktail – it takes more to create one. Kaiko has oodles of skill and a confident palate. I’ll be crossing my fingers for her and Jack Rising during the judging next week.