AmyB November 9, 2015 April 16, 2017Edinburgh, Restaurants, pubs and stalls, Review
Passing St Patrick Square on my way home, I thought I’d duck in and grab a couple of burritos from Illegal Jack’s. I’d been to the outlet on Lothian Road back in the day and followed their Kickstarter (or “Jackstarter”) closely, so it was about time I saw how they were getting along. 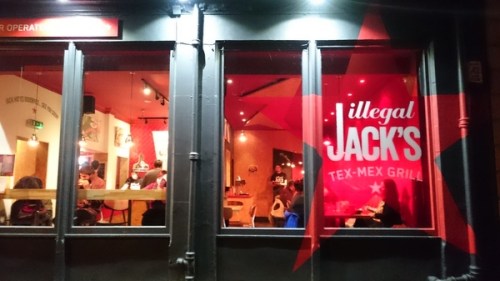 Inviting on the outside

The restaurant itself is great – I instantly felt happy and welcomed in to the space. Compared to the cavernous white interior of its predecessor, the new site felt more intimate, trendy and relaxed. For better or worse, their target market is clear from the outset – and they also have a strong presence. In every direction, the youthful faces of chatty students could be seen; seated at shiny red booths sharing taco bowls, peering over the serving counter and sauntering about beneath big posters with social media-esque phrases. “Yummy yummy in your tummy pre-gig Tex-Mex @ Illegal Jack’s #happy,” reads one. Perhaps not the place to actually bring your mum, when she visits and does your washing. 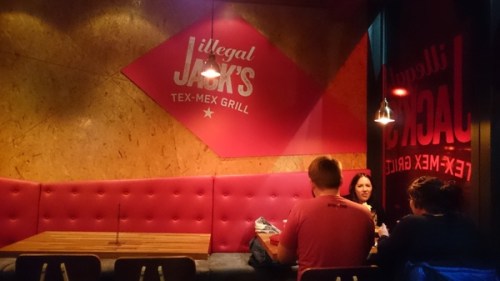 The food is pretty satisfying too. The ‘original’ burritos (as opposed to the alternative, ‘small’) were HUGE – a seriously weighty wrap that took two hands to hold. This is because each meal comes with rice, beans, cheese, sour cream and jalapenos, with guacamole an optional extra (and cost). Obviously, I wanted all of the above but I did feel that once you had all the fillings, the flavour of the meat or other main ingredient got a bit lost. However, overall the flavours were very well balanced and the descriptions of spiciness were accurate; my mild was just enough to assert itself. I’ll definitely be back. 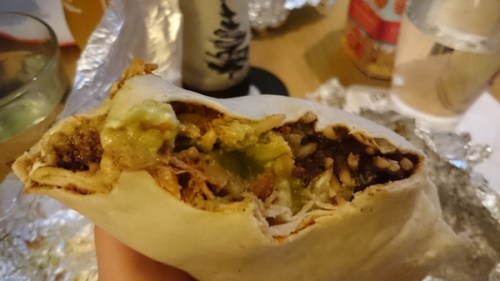 Carnita Burrito – so hard to take an attractive picture…