Seasons occupies a unit on Broughton Street. The last time I was there it was the Blue Moon Café (I had a rather nice lamb burger) and I worked just up the road. A lot has happened both in my life and on the Edinburgh dining scene since then. Seasons is one expression of that change. Instead of a menu, the restaurants has an ethos. In a growing trend, first seen in Edinburgh at Aizle, there’s not a menu but a list of ingredients. 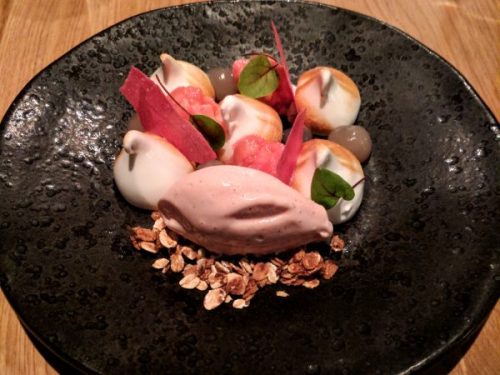 Seasons promise seasonal ingredients sources locally and in Scandinavia. They want to take diners beyond their normal expectations, to surprise and delight.
Hence the list of ingredients: you probably won’t have all of them, but it lets you warn the kitchen if there’s anything you cannot or will not eat. The next choice is number of dishes – four or seven – and whether you want a matched drinks flight or not. Intriguing things soon start appearing from the kitchen.

I know some people who would find not knowing exactly what you’re going to get deeply stressful. As a committed omnivore, I find it relaxing. Decision angst is wiped away, along with lingering regret when I realise my companion chose better than I did. I enjoy the adventure of eating what I’m given. It’s like a dinner party at a friend’s. 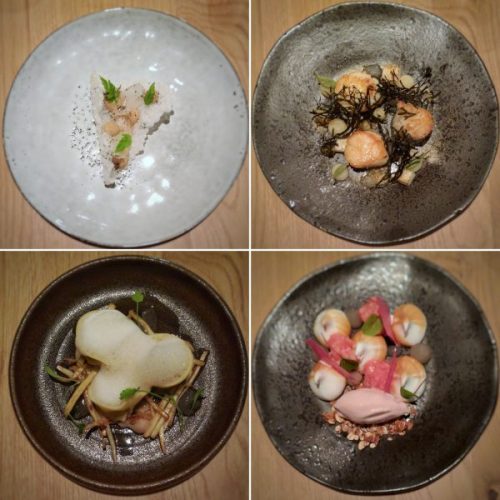 Left to right, top to bottom: tapioca cracker with onion puré and herbs; scallops with channel wrack, pear and apple; tortilloni of wild hare with Madeira foam and celeriac; all the rhubarb lovelies.

A use for tapioca

The very first thing we ate was a tapioca crisp with onion, onion puré and herbs. It was crunchy, sweet and savoury in a very pleasing way. I was delighted to be presented with tapioca in a form that made it interesting, even delicious. So from the start, our expectations were high.

Dish 1 was charred scallops with channel wrack (a seaweed), charred cubes of pear and apple. It was delicious. The pears added that tiny bit of acidity that scallops benefit from and the channel wrack, which had been dried and then deep fried, had a great crunchy texture and an intriguing flavour which reminded me or cinnamon. The black seaweed looked dramatic against the creamy scallops.

So, two plates in and we’ve had two surprises. Good going! 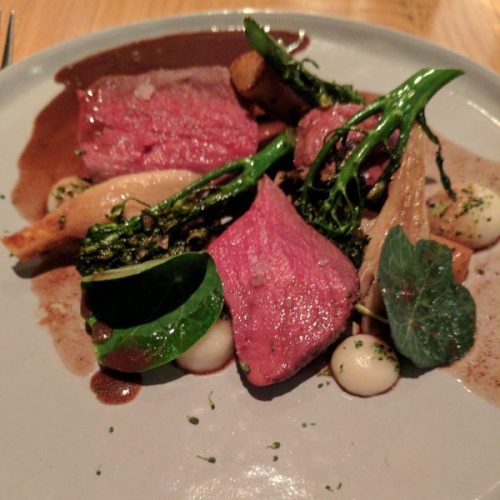 Pre-dessert: a shy quennel of blood orange sorbet in a lean-to of meringue.

Dish 2 was tortilloni of wild hare on crunchy and pureéd celeriac, Madeira foam and gel. Hare is gamy and lean to the point of driness, so the foam and gel added more than just hits of well-balanced sweetness. The celeriac match-sticks were delicious, the pasta that encases the hare firm and just-so. I enjoyed the combinations of textures and flavours although this was probably my least favourite dish. (There has to be one!)

Dish 3 brought loin of venison with oyster mushrooms, salsify roasted and pureéd, broccoli and chocolate jus. It was perfection on a plate. The venison was dark pink and soft as butter, the flavour rich and wonderful. The chocolate jus was a beautiful foil, adding both sweetness and a deeper umami. I can eat my weight in oyster mushrooms but this dish didn’t need more than a couple. The venison was the star and everything on the plate harmonised to make it sing.

It was one of those dishes after which you need a pause. Not to digest physically but rather mentally, to come back to earth, as it were. The pre-dessert was well timed and nicely judged. Under a crisp white sheet of meringue propped up by a slice of dried blood orange hid a quennelle of blood orange sorbet. It was just as refreshing as a palate cleanser should be. The blood orange crisp crunchy and tart, the meringue melt-on-the-tongue and sweet, sorbet soft and delicious. 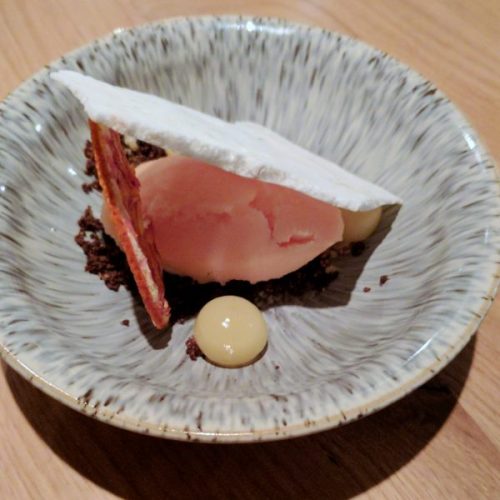 Pre-dessert: a shy quennelle of blood orange sorbet in a lean-to of meringue.

Dish 4 was rhubarb ice cream with Italian meringue, fresh rhubarb, rhubarb gel and roasted oats. My companion for the evening accompanied me to Norn last year and we had some reason to compare the two restaurants. The clean interior with hints of Nordic wood was one reason, the rhubarb dessert the main. This was a very different beast but it had one thing in common with the one we ate last year: it wasn’t too sweet. An almost salty element managed to keep the dish refreshing and satisfying, Italian meringue and all. It was a great combination of sweet and tart, soft and crunchy. A really good end to a lovely meal.

This time, we drank the house white: the next time, I’ll do a drinks flight. It’d be really interesting (and fun) to let the bar be in charge of what I drink. I’m sure they’d do just a good job of it as the kitchen did. Interesting ingredients treated with a sure hand means a visitor to Seasons can rest assured that whatever they’re about to eat, it’s going to be something to look forward to.

Caroline was invited by Seasons to dine.