I’m a fan of chef Rosario Sartore, owner of Locanda de Gusti and Pizza 1926 in Dalry. Both restaurants are excellent in their own way. I’m celebrating my anniversary at Locanda this year and Pizza 1926 has some of the best pizza I’ve ever had. Rosario’s extending his reach in Dalry with a deli, located opposite Locanda de Gusti and just down the road from the pizzeria. I was very excited to go for lunch. 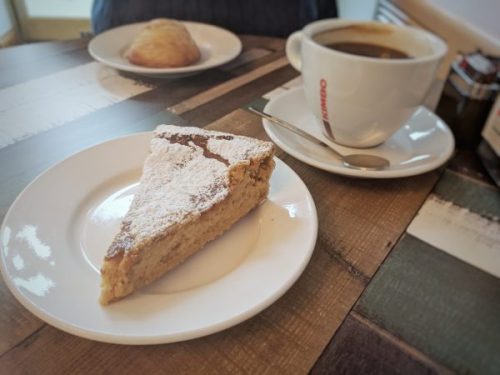 Cake. It’s not all about the cake but the pastiera (front) and sfogliatelle (back) are both fabulous.

It was busy the first time we passed to we took a stroll round the neighbourhood. When we returned, seats had freed up and we pounced. The deli offers dishes to take away or eat in, cakes and sweets as well as Italian produce like mozarella, pasta, passata, olive oil and other delicious staples. If you’re in early enough they also have bread – the baguette is gorgeous.

I decided to have the parmigiana since I’m an aubergine fiend. It’s served with a side salad and is sized so you can squeeze in a cake too. Christopher had a potato rosti. 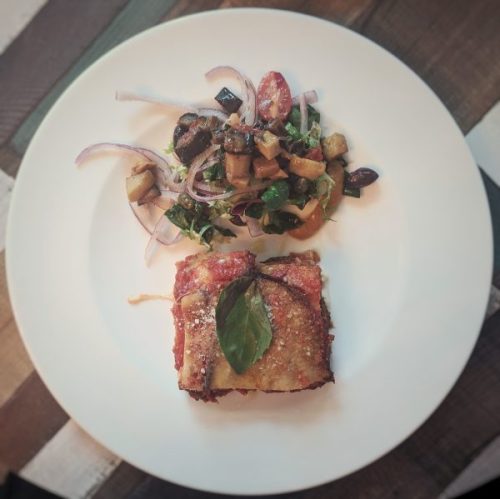 A neat square of parmigiana and a tasty salad. Perfect lunch.

The parmigiana was neat – thin layers of (breaded?) aubergine and tomato in a satisfying, firm and flavoursome stack. A hint of cheese made it all the more comforting. The salad was fresh with leaves and olives and tomatoes. A nice balance to the rich aubergine.

For afters I had the pastiera and Christopher a sfogliatelle – the crunchy 1000-layer pastry horn of GBBO fame*. It was stuffed with ricotta flavoured with candied orange peel and orange flower water. Absolutely gorgeous. The pastiera’s ricotta filling is similar in flavour but firmer and darker. It’s my favourite take on cheese cake and I’m delighted there’s somewhere I can get some to take home.

The cake cabinet was full of wonders: an amaretti cake I fancied, baba aux rhum, choux swans and pear frangipane tarts. Always good to know that if the food – parmi, salads, croquettas and rostis – don’t appeal or you only have room for sweets there are still several options.

I can’t say how delighted I am to see Rosario’s empire expand. It brings some authentic, Italian delight to the area. I’m also excited about his next venture, Nero a Mata in Slateford. It opened February 1 and no, we haven’t been yet. No doubt, you’ll read a report from there before long.

* When I was off with a cold last week Christopher brought me one. What a treat!