On a sunny Sunday morning, I turned up at Locanda de Gusti to learn how to make pasta with chef Rosario Sartore. In two hours, he showed me how to make and shape three types of dough:

While we worked, we talked about Italian food and culture. Rosario shared experiences from his career as a chef in Italy and Britain. He’s passionate about good food, good ingredients and regional dishes. Much of the pleasure of eating out is taking a mini-journey, eating something different, experiencing new flavours. Rosario is from Naples, in the south of Italy. He cooks seasonal food using traditional recipes, adding his own twist. He grew up with a large and close family where food played a central role in family life. Pasta is one of region’s staple foods. It was a real treat to get to spend time in Rosario’s kitchen and I learned so much about how to make pasta. 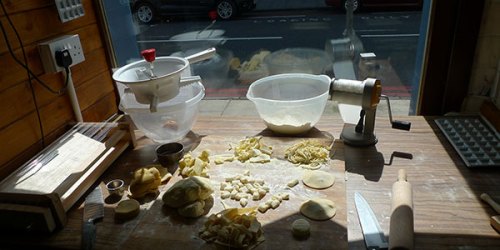 The sun gilded Dalry Road as Rosario showed me how to shape pasta in Locanda de Gusti’s kitchen.

Getting a peak inside the Locanda de Gusti kitchen was fun. It’s compact but well laid out and has kit I haven’t seen before. I loved the pasta cooker, a dedicated, self-draining water boiler that ensures that every portion is cooked safely in fresh water. I was also immediately impressed by the flour bins, one full of 00 and one of gran duro. We returned to these regularly for flour for the pasta. Rosario showed how quick and easy making pasta can be. Of course, if helps if you have his experience. 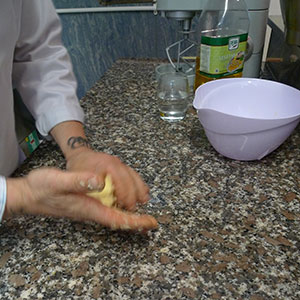 Kneed the pasta on a floured surface until the dough is pliable and stops being sticky.

The north of Italy is cooler than the south and that’s reflected in the cuisine. Here, sauces are slow cooked and are heavier. Egg pasta is perfect for picking up a heaver sauce because it has the texture and strength to stand up against them.

I’m used to thinking of egg pasta as the only pasta so I was curious when we moved on to the egg-free pasta. Rosario made both quickly and easily – my first experiment at home will be with the egg-free variety because there’s something very elegant about its simplicity. 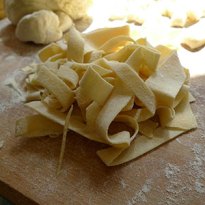 The south of Italy is warmer than the north so there’s less need to pad your ribs against cold winters. It’s also really hot so you don’t want to spend hours in the kitchen. The south is traditionally poorer, so eggs is more of a luxury, not something you have all the time. Pasta without eggs is lighter in texture than egg pasta but keeps its bite. It’s fast and easy to cook with: simply make a sauce with some olive oil, a couple of tomatoes, and basil. Boil the fresh pasta for a minute and then serve. 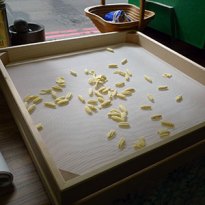 I love gnocchi and have made it successfully a few times. The last time, however, I wanted to make walnut gnocchi for a dinner party. It was a disaster. The potatoes were too wet and didn’t bind with the flour. Adding more flour made them taste horrid and also made them hard as bullets. That night, we had tagliattelle. After my time with Rosario, I have all the knowledge I need to never mess it up again.

As with pasta, northern gnocchi are often made with egg to bind potato and flour together. In the south, you only need two ingredients: potatoes and flour. 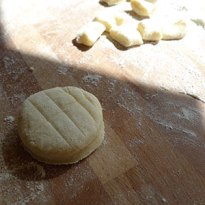 Save Print
Preparation time
45 mins
Cooking time
2 mins
Total time
47 mins
Potato pasta, gnocchi, is hearty and warming. The dumplings can be served small or large, fried after cooking or left as they are. They are lovely with a simple tomato and caper sugo. Potato dough feels lovely when it's just done: still a little warm to the touch, soft and smooth. It can be cut immediately. If you let it rest, some of the water in the potato might be released and you'll need to add more flour to keep it manageable. The less flour, the stronger potato flavour.
Author: Edinburgh Foody
Recipe type: Pasta
Cuisine: Italian
Serves: 1-4
Ingredients
Instructions
3.5.3208

Pasta comes in all kinds of shapes, and most are easy to make. Rosario showed me how to use a traditional chitarra to make spaghetti and tagliatelli. It looked like a large bead-weaving frame (or, indeed, a guitar neck) and was a great, low-tech way to make shapes. Sheets of pasta are draped over the metal strings and pressed through with a roller pin. Ta dah! Spaghetti and tagliatelli a la chitarra. 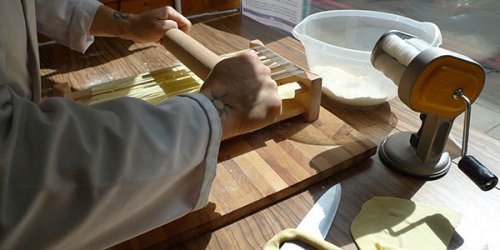 Cutting spaghetti on a chitarra: traditional and efficient.

Rosario also showed me a lovely machine for making gnocchi sardo and cavalleti, traditional small shapes. It looks like a mini pasta machine and created regular shapes that previously demanded a lot of fast finger work. It’s simple technology at its best and saves lots of time. All these shapes were made with the standard pasta dough. 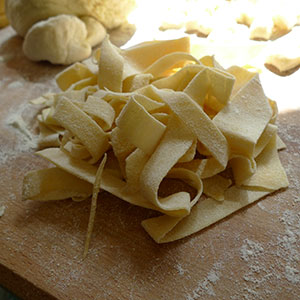 The papardelle Caroline cut – not as even as the one Rosario cut.

Egg-pasta takes a little more rolling out and holds its shape very well. Pasta machines are great, but you can make pasta without them. Roll out the dough thinly. Make sure it’s well floured and then loosely fold it and cut with a sharp knife to make tagliatelli or papardelle. It’s also great for ravioli: roll out two sheets, put filling on one, put a little egg around to act as a glue, then add the other sheet. Press firmly to stick the two together, then cut out the shapes with a round mold.

Gnocchi Romana are bigger than the Neapolitan gnocchi, and you get fewer of them. The southern style is smaller gnocchis. Roll out a piece of dough, cut into pieces and press lightly with a finger. Done.

The gnocchi dough makes the perfect gnocchi. You can taste the potato, and it’s got a lovely texture. You can fry them after cooking, if you want a bit of crunch, but I like them just the way they are, with a bit of olive oil and a small amount of black pepper. Or with a fresh tomato sauce.

That’s what I made when I got home that night. Rosario gave me the potato dough to take home and I cut it into small shapes (about 1″ cubes), plunged them into boiling, unsalted water, and waited until they rose to the surface. At that point, I transferred them to a simple tomato and caper sauce. When all the gnocchi were cooked, I stirred the sauce and served. It was absolutely delicious. Christopher declared them the best gnocchi he’d ever had. We’re planning a visit to Locanda de Gusti to have some more.

Pasta can be made quite easily at home: it doesn’t have to be hugely difficult and fresh is nicer than dried. If you make small batches, pasta making doesn’t have to take long either. Control the amount you make and it’s very manageable. (A main portion, with sauce, is about 80-90 grams of pasta, so if you’re cooking for four, don’t make more than 400 grams.) If you make more than you can eat, it freezes. Put each potion into a bag, freeze and use within three months. It cooks at the same time as fresh pasta. Eat it with a good, simple  sauce to really enjoy your labour.

To try Rosario’s home-made pasta, with cooked-to-order, authentic sauces, visit Locanda de Gusti on Dalry Road. The restaurant’s motto is honest, sincere and simple. The food is made with great ingredients that are allowed to shine. Pasta is made fresh, bread and desserts are made on the premises. This is food to enjoy with friends and family, food to take your time over. You want to eat it with the same love and attention that Rosario used to make it.