Pizza Geeks – the dough force is strong in this one

It was one of those evenings: we weren’t going to do anything and we most certainly wasn’t going to stay out and eat. But after a pint in Mad Hatter we didn’t really feel like going home to cook either. I suggested pizza and we decided to have a look at Pizza Geeks, the outfit that took over the unit that once housed Sushiya. We were in luck: there were tables. 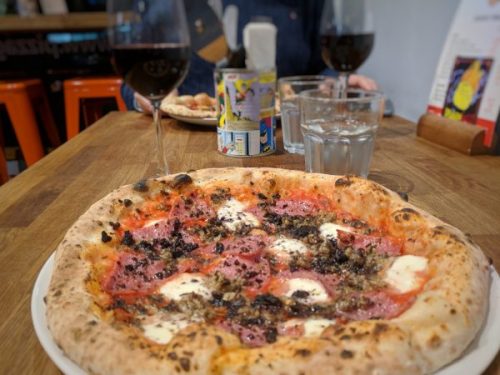 Colourful, funny with very good dough: I give you Pizza Geeks.

Pizza Geeks’s menu is pared down to essentials: this is about pizza. I rejected garlic bread to start because, well, pizza, and we ordered glasses of Merlot. I wanted the Braveheart – haggis, black pudding, and salami. Christopher took a Shire – red onion, olives, roasted potato, blue cheese, rosemary – but without the blue cheese. And what’s in a name! Pizza Geeks have my number. Whereas I’ve never considered eating a Quattro Formaggio I very nearly plumped for a Fantastic Four. The Wildling speaks to me with its butternut squash and chilli jam and the Mario looks like an exercise in purity rather than a riff on the Margarita.

Fluffy, black-spotted edges and well-topped middles tempted. Pizza Geeks ferment their dough for 48 hours so it develops a really good flavour. We both took small pizzas (9″) and found them sufficient. I’ve been trying to train myself away from automatically ordering large and, after a year or so of hard work, can now do that without feeling I’m short-changing myself. Small pizzas are filling too. 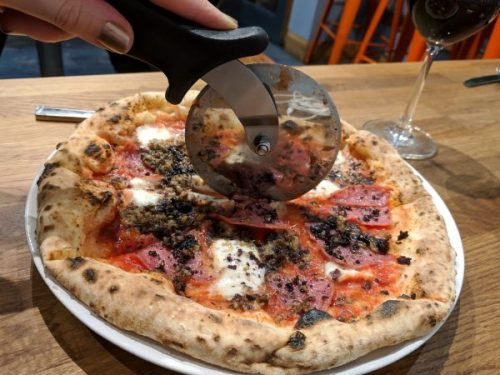 Action shot! I love a reflective surface. (Can you spot the headphones?)

I loved the dough – it had flavour and texture, I needed my teeth – and my toppings were full of flavour. It was the day after Burns night so haggis felt very right. The pizza was soothing and warming and fun all at once. I had a bite of Christopher’s pizza too: loved the olive tang and the next time we go, I’ll have that one with the extra cheese.

Pizza Geeks stay close to their geek credentials with pizzas named for Star Wars and other franchises. As well as the middle-aged couple that is us, there was a dad and his 8-year-old son, a group of people in their 20’s, another couple out for a quick bite who swithered between the Space Invaders tabletop game table (+ game!, – near the door) and the window perch (+ good view, – no game). The space is open, there are colourful touches everywhere. I’ll be back. Meanwhile, visit and enjoy.