Dining in for vegetarians – trying a Friday night treat

A couple of weeks ago I decided to have a look at the ‘dine in’ offer at a popular high-street food court. For years, I’ve heard people croon about M&S food and I have been known to dip into their take-away food isle myself. This is the first I’ve tried the super-value Friday dinner option. 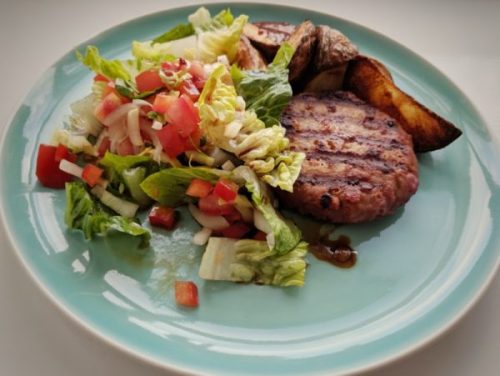 Dressing up my veggie burger with a crunchy salad and doenjong sauce for wedges (and burger too).

For £12, you get a bottle of wine, a main, a side and a dessert. Now, I was looking for the veggie option and was really curious to see what there would be.

Burgers. I’d been hoping for something more fun but, considering the main and sides thinking, I shouldn’t have. The meal is pick and mix where you can chose more or less healthily but everything needs to go together.

I chose the veggie burgers. They’re following the seeming trend for veg-that-looks-meaty: soy and wheat proteins coloured a beefy pink with beetroot.

For the side, I would have gone for veg except C isn’t a fan of corn on the cob and the salad was mostly iceberg lettuce, my least favourite lettuce. This left me with three options of potato: mash, frites and wedges. I went for wedges.

Our sweet tooth was well served: there was fruit, chocolate tarts, trifle, Swizz rolls and all kinds of fun things. I couldn’t find the strawberries so had the veggie lemon cheesecake.

To wash it all down, I chose a rosé. It was almost summer, after all.

I don’t know how other households spend their Friday evenings. We’re past the party flush of youth and are trying to save money so cooking and Netflix features heavily.

We put two of the four burgers in the freezer and two in a grill pan, stuck the wedges in the oven and made a side salad, dressing and Korean-inspired sauce for the burgers.

Leaving the cheesecakes out to get down to room temperature and the rosé in the fridge to not, we settled in for dinner. 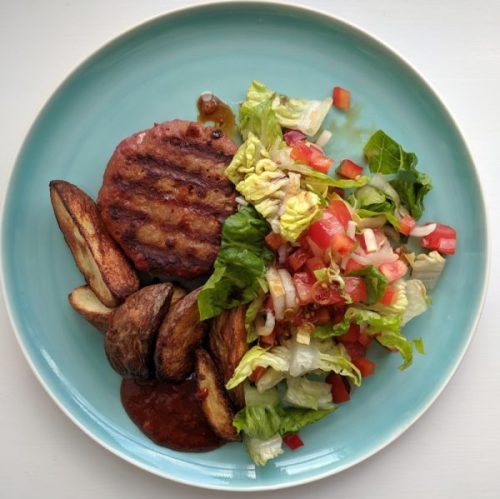 Dining in on burgers and wedges.

I’ve come to the realisation that I prefer a bean burger or nut burger to a generic veggie-protein-looks-like-meat burger. There’s something about the generic taste and texture that’s less satisfying than a burger where you can see the ingredients. One that’s not trying to be something its not. It was still nice: slathered in doenjang/gouchan sauce, everything is nice if not even delicious. The salad and it’s light Asian dressing was tasty too and the wedges competently mopped up sauce and dressing remnants on our plates.

The cheesecake was nice but I kicked myself for not finding the strawberries because they would have made for a more refreshing end.

We didn’t like the rosé so instead we drank a series of tinned gin cocktails, including three Eden Mill exclusives from Aldi. My favourite was the chilli and ginger one. It had very pleasant bite. The gin with berry tonic and plum and grapefruit gin with tonic varieties went down well too. 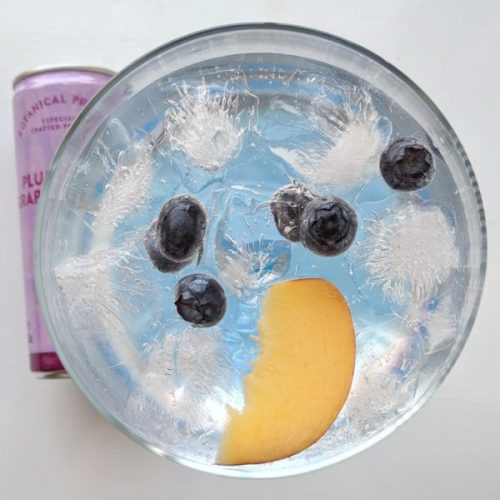 No, we don’t always drink our gin in a goblet but with a fruity Eden Mill/Aldi collaboration, it felt appropriate.

Will I do this again?

Twelve quid for dinner and wine for two is very good value. We calculated the cost of, say, channa masala. The food part – chickpeas curried with tomatoes and coconut milk, naan and home-made coconut chutney – comes to less than a tenner. The wine I order from Naked Wines, however, sits between £9-11 per bottle so at that point, the price for the meal goes up sharply.

We had a pleasant meal but it took a little work to make it that way. I imagine most people customise their Friday indulgence with veg, burger buns or other bits and pieces. But I didn’t find it the blissful experience some of my colleagues do. There just wasn’t that much choice for us and that made it feel more like we were making do than indulging.

You’ve heard me say this before: sometimes, I’m not in the target market. This turned out to be one of those times. So no, I probably will not be dining in this way again.

What are your experiences? Do you look forward to dine-in deals on a Friday or do you prefer to order in, go out or cook from scratch?