Going to The Dogs. But first, Seadogs.

This restaurant is now closed

Seadogs is a fish restaurant in the popular and successful Dogs chain. The Dogs, the first in the series, offers amazing rustic dishes based on cheap and unusual cuts. It was so popular that they opened Amore Dogs, an Italian version of the original concept. The latest restaurant focuses on fish. I went there for pre-Christmas cheer with a couple of friends a positively balmy if snowy evening in December.

Online reviews for the dog chain make interesting reading. Some people love the restaurants, others are not convinced. The three restaurants may serve different types of food – The Dogs is heartily carnivorous, Seadogs all glinting in fish-scales and Amore Dogs doggedly Italian – but they have a similar ambiance. Dogs do not do fine dining. They do good dining, though, personal, friendly and casual. If you want ceremony, this is not the place for you. If you enjoy dinner at a friend’s but would prefer it if your friend didn’t have to cook, this is the place for you.

Seadogs had touches that reminded me of Spoon Cafe on Nicholson Street: tables and chairs are solid wood but they don’t match and they’re not new. Table decoration comes in the form of pretty saucers with tea lights on them. Water jugs are bright red plastic. It is all unpretentious and cheerful, with bits of fish-themed wall paper here and there and the odd cement dog in a corner reminding you of where you are. We ate upstairs where the window towards Rose Street North formed an almost perfect black wall on a dark evening. It was quite a mixed room, neither busy nor dead. We had a couple in their mid-twenties to the left, a pair of female friends in their fifties to the right and various mixed groups along the window. 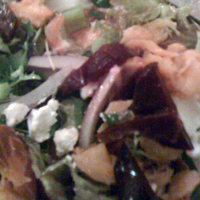 Environment and food worked together to give us a really nice evening. The service is friendly and personal and the food is sublime, if rustic food can be. We have really similar tastes in food so between the three of us we had three dishes instead of the six possible since we each had a starter and a main. I started with a beetroot, goats cheese and smoked salmon salad. Three of my favourite things on a plate. The salmon was hot smoked, all prettily opaque and pink which makes a nice change to the cold-smoked salmon I usually have. With food we had the house white which worked really well with flavours punchy and delicate. 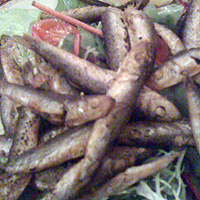 Whitebait tastes so much better than it looks.

Seadogs offers fish and chips, done the way you like it, but also a good range of other dishes. They have whitebait as an option for fish and chips but if you don’t want a huge plate of little fish you can have them as a starter with a tasty mayo. As did one of my companions.

For mains, two of us had smoked hake on champ with a poached egg on top while the salad came back out as a main. The smoked hake, champ and egg was delicious. It was served with some of the poaching liquid from the fish, a wonderously tasty sauce for the champ. The poached egg was perfect. The white firm and shiny, the yolk runny and creamy. (I would have photographed it but was using my phone to browse at the time. It was central to conversation.) The champ made a silky accompaniment to the fish. The dish was perfect on a cold day. Just perfect. It was soothing, delicious and filling. Rather too filling maybe since one of us couldn’t finish it. “I’d use that much fish for two people“, she said when she decided she couldn’t manage any more.  I thought the fish was just right but could have left some of the champ. But I didn’t, it was too good.

We finished with coffee and were among the last tables to leave the restaurant. We were made very welcome and very comfortable. We had originally got the table for two hours but were allowed to sit as long as we wanted since they didn’t need it. It’s nice to be able to linger. I look forward to going to The Dogs early in the next year and plan to visit Amore Dogs too. From what I’ve seen of it, the format really works for me.