A sous vide machine you can make at home

We have been impressed for some while by the quality of food cooked sous vide by various chefs, including those on The Great British Menu. Sous vide is the term used for vacuum sealing food in a bag, and then cooking it in a relatively low (but very accurately controlled) temperature water bath. The purpose of the vacuum being to ensure a good contact between the water and the food inside the bag, without any air insulating the food from the water.

It was with great delight I found Seattle Food Geek who had found a way of doing a bit of DIY to make a lower cost sous vide cooker. His claim is to make a DIY Sous Vide heating immersion circulator for about $75. So I set about sourcing all the components to have a go myself.

Do give yourself plenty of time to round up the essentials and please read the disclaimers before you start on this project. 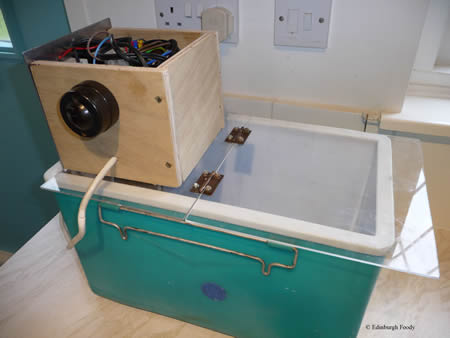 Our sous vide cooker and coolbox 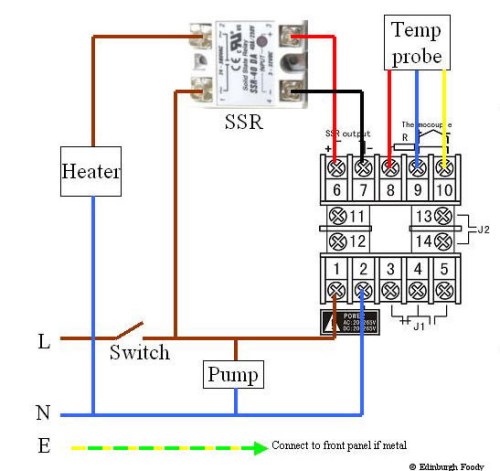 DO NOT turn the unit on until the heater is immersed in water otherwise the heater will quickly burn out.

The instruction manual for the control unit can be downloaded from the JLD612 manual.

Next you may want to calibrate your temperature probe. Do this by putting the probe in ice water and boiling water. (Not forgetting that if your heater is connected it must remain immersed. I temporarily disconnected the heater to do this.)

Once the temperature reading stabilises at each of the 2 temperatures, record the values. Go back into set up mode on the control unit, and scroll until ‘ PSb’ shows in the display, and press’set’. Adjust the value to give an equal and opposite offset at the 2 extremes. Note that the 1st digit can be set to minus. [For example my probe read 99.8 and 0.6 initially. I then made ‘PSb’ –002 (= -0.2), and checked that I then got readings of 99.6 and 0.4].

The next thing is to autotune the parameters in the control unit. This measures the characteristics of the water bath to give optimum control. This is affected by the size, shape, volume and insulation properties of the water bath, and also the response of the heater and temperature probe, and the target temperature. I found that the whole bath needs to stabilise a bit before starting this.

In use, I have found that the connection of the wires of the temperature probe to their spade terminals has not been particularly good, causing the unit to read either high or erratically. I have taken these apart, and soldered them on to ensure a good contact.

By now you should be ready to go!

We’ve mostly experimented with cooking fish: mackerel, plaice, barramundi, gurnard, john dory fillet, etc. Most of these have been done for about 40 minutes at 60° C it always comes out very moist and flavoursome. We have also done beef cheek, mutton valentine chops, duck and chicken with more varied results. Check out our sous vide top tips.

The steps we have described above are a guide and provided for information only. You are entirely responsible for your own, and others, safety. Please do not attempt to construct this unless you are satisfied that you are sufficiently competent. Water and electricity can be a lethal mix.

Food should be sufficiently cooked so as to destroy harmful bacteria, etc. Please ensure that you have selected appropriate temperature and time settings. See references below for further explanation.

Prices and availability were valid November 2014.

Sous Vide for the Home Cook – the book by Douglas Baldwin. This is the “bible” on sous vide. However, it is an American publication and the cuts of meat are not familiar!

Sous-Vide and Low-Temp Primer Part I from the French Culinary Institute. Lots of useful information: temperature charts and pictures of things you would not expect.