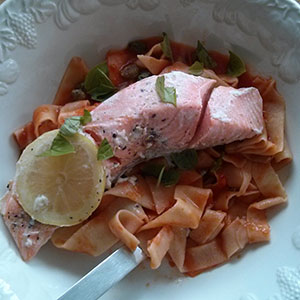 My first sous vide meal: salmon on a bed of home made pasta and sugo.

EF is a fan of sous vide cooking – if you’ve followed us for a while, you’ll remember that Mr. EF built a sous vide machine a while back. Recently, SousVide Supreme, a company that creates compact sous vides for the consumer market, asked us to review their latest machine. EF is an experienced sous vide cook, so Caroline took on the task of trying the SousVide Supreme Demi and learning a new way of cooking.

Here are her findings.

Sous vide is the process of cooking vacuum packed food in a water bath. It’s popular in restaurants because you can control the temperature very precisely. It’s gaining popularity at home too, where it is a relatively mess-free method because you’re using vacuum bags to cook in. You can also cook without adding fat so it’s healthy too. The main reason so cook sous vide is that the careful temperature control means that food is cooked perfectly so you get the best possible flavour from it.

The SousVide Supreme Demi is a nine-litre ‘water oven’, perfect for two people or a small family. Operating it is easy: set the temperature, set the time, off you go. It comes with a rack that helps separate portions so that they don’t touch during cooking – water needs to flow around each portion for even cooking – and a base ‘grill’ keeps vacuum pouches and bowls off the heating element. With the grill in place it can be used as a bain marie.

Sous vide cooking is energy efficient. Just like a slow cooker, keeping the temperature constant once it’s at the right temperature is takes very little energy. Actually, thinking of sous vide as slow cooking makes sense. The big difference is here is that the temperature can be controlled so there no risk of over-cooking food. Leaving something in longer than the recipe calls for won’t ruin it, burn it or turn it to mush. You can’t overcook food using this method. That also makes sous vide cooking pretty flexible.

The precision won me over. The fact that you can’t ruin a beautiful piece of fish, or kill a steak, using sous vide is a very compelling selling point. Because the Demi is a sizeable piece of kit, I found myself using it for all kinds of foods so make sure that I got my space’s worth. I’m looking forward to trying it for an even wider range of dishes and condiments.

A vacuum sealer is crucial for good sous vide cooking. I might never get over my thrill at using one. (Image borrowed from SousVide Supreme’s website.)

I tried a variety of different things in the sous vide, from fish to infused vodka. Everything came out tasting wonderful. There’s a knack to cooking sous vide, like there’s a knack to any new method. I found, for example, that I like my veg done a couple degrees hotter than recommended.

Perfectly cooked meat is what sous vide fans talk about most. Ours is a mostly vegetarian household so I haven’t used it for steak yet. I have used it for salmon and eggs. The eggs were lovely – properly soft boiled – but the salmon was a revelation. Fish cooks relatively quickly: 30-40 minutes at 60°C does it (exactly how long you need to cook it depends on how thick the fish is. Thick pieces take a lot longer to cook than thin ones. This is the case for all foodstuffs and I’ll mention it again under vegetables).

The salmon (four fillets, individually vacuum packed with a slice of lemon and a sprig of dill, cooked at 60°C for 35 minutes) was a revelation. I grew up on salmon so I’m now quite fussy about it and it’s rarely my first choice of fish to eat, unless it’s cured, smoked or wild. I’ve had overcooked salmon too many times, pink lumps of dry flesh that has lost its flavour but somehow manages to retain its fat, to risk that again. Now I don’t have to. These fillets were  absolutely perfect, moist, flavoursome and tender. I ate one fillet the first night and cooled the other three down, saving one for the next day and popping the remaining two in the freezer in their vacuum bags.

Step 4 of the process – sear – isn’t necessary for salmon. I did sear one to get a crispy skin and that was lovely. The other three I ate without skin. 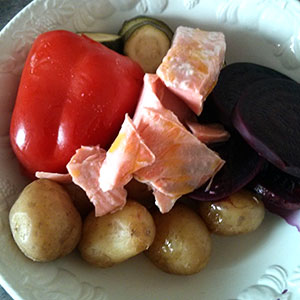 My first sous vide meal was salmon with mixed vegetables: potatoes, beetroot, courgette and pepper. The first two went in first, because they take longer, and the softer veg cooks quicker. I’d cooked the salmon the day before, so I didn’t have to juggle timings and temperature.

I cooked two baking potatoes for 4 hours each at 87°C, peeled them, weighed them, riced them and mixed them with half the weight of flour to make gnocchi. They were gorgeous! Because the potatoes were cooked sous vide, they didn’t take on extra water so I didn’t have to worry about the mixture being too wet. We ate the gnocchi our favourite way, with sugo, capers and salad. Next time, I’ll peel the potatoes first, and slice them before sealing and simmering. That’ll speed up the cooking process considerably. (Saying that, I put the baking potatoes on at lunchtime and they were ready when I wanted them.)

Since the temperature was up anyway, I made us poached pears for desert. They were gorgeous and the poaching liquor they produced was good enough to drink. 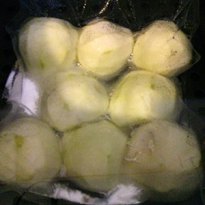 Save Print
Preparation time
10 mins
Cooking time
45 mins
Total time
55 mins
These pears poach in their own juices and are flavoured with mellow vanilla and warming cardamom. I served them with Greek yogurt loosened with some of the poaching liquid.
Author: Edinburgh Foody
Recipe type: Sous vide, Dessert
Serves: 2
Ingredients
Instructions
3.2.2708

A sous vide is a waterbath, so it can be used to create any dish that use need a bain marie for. Christmaspudding, creme caramel, cheesecake, even yogurt: let your imagination roam, or have a look at the recipes on the website, and see what you can do. My experiment for less traditional dish was, unsurprising to the people who know me, infused vodka. I wanted to make elderflower gin, but the elderflower season is well and truly over so vodka it was. The gin will have to wait for next year. 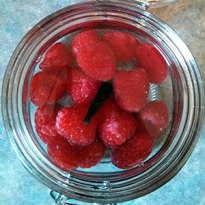 Save Print
Preparation time
5 mins
Cooking time
3 hours
Total time
3 hours 5 mins
My experiments with the SousVide Supreme Demi quickly saw me making infused voka. Why wait for weeks or months when you can infuse your favourite tipple in a few hours?
Author: Edinburgh Foody
Recipe type: Sous vide, drink
Serves: 10
Ingredients
Instructions
3.2.2708
SousVide Supreme have special zip-lock bags that are good for liquid or dishes that should cook with a sauce. A top tip for bags: turn them inside out, clean them well and you get at least one other use out of them.

I foresee using the sous vide for mulled wine (both Swedish glögg and the British version) as well as making flavoured oils. Guess what everyone’s getting for Christmas this year?

Sous vide cooking is delicious and much easier than I thought it would be. I really like my SousVide Supreme water oven and look forward to learning more recipes for it. My experiments with veg has shown that sous vide is not just for meat and fish: it’s great for fruit and veg.