Sushi: what’s the best in Edinburgh?

Sushi. It’s all about the fish and the fish has to be fresh. This close to the coast, sourcing good fish and serving it up should be easy. So why isn’t Edinburgh awash in excellent sushi eateries?

I think it has something to do with the fish eating public. Edinburgh is a haven for foodies and sports a vast range of different cuisines but raw fish is still a step too far for many people. It’s a good thing that sushi restaurants also offer all kinds of cooked fish, chicken and meat dishes. There is more to Japanese cuisine than just raw fish but a lot of it we are unlikely to see. Fermented yellow beans or tofu are not popular with a Western palate, even kimchi – that delightfully hot Korean cabbage pickle – isn’t a universal favorite. We do enjoy edamame and we have taken to eel and rice, chicken katsy curry and teriyaki. The king and queen of sushi fishes are still tuna and salmon. 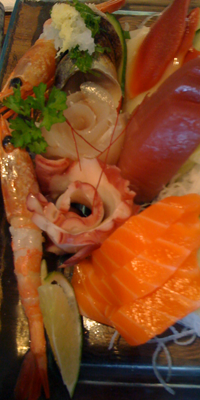 Edinburgh wasn’t always sushi central but now there are several sushi restaurants in town. The first one that really hit my radar was Sushiya, a tiny little sushi restaurant hidden behind a bus stop on Dalry Road. It has been there for nigh on ten years, offers all kinds of interesting dishes and is always busy. I am not biased about Sushiya: I love the place. I like that it is small and busy and that the fish is fresh. Since I started going to sushiya a lot of new Sushi restaurants have opened in Edinburgh, in Tollcross, off George Street, on Candlemaker Row, in Harvey Nicks and on Rose Street. There’s even one two doors down from Sushiya. Some of them impressed me and some of them have not. Here’s a quick rundown of the one’s I’ve been to most recently and think are worth talking about.

A newcomer and one that Danielle seems to go to rather frequently is Kanpai Sushi. This is located in what used to be Stac Polly and not for nothing did it win the Most Stylish award in the List’s most recent food and drink guide. It’s one of those places that you sit enjoying your delicious food but see a dish being conveyed to another table and think “I’m going to have to come back for that”.  The menu is presented as a book of appetizing photos you can even view this online which is a good thing as their website is one of the most irritating I’ve come across recently. The choice is wide and the fish very fresh. If that variety is not tip top, it simply isn’t on the menu that day. There’s some lovely cooked dishes too. 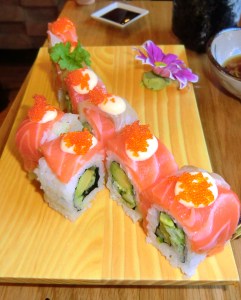 I recently went to Sushiya for edamame, soft shell crab tempura, dragon roll and special sashimi. It was great. What’s in the sashimi varies depending on what’s available, but typically it features tuna, salmon, sea bass, clam, octopus, prawn and squid. Raw squid may sound odd but it is delicious. They score the meat so that is is easy to chew and the flavour is fresh, soft and buttery. I could eat a lot of squid sashimi and not get bored. Sashimi has to be really fresh to be tasty and I’ve never had anything but excellent sashimi at Sushiya. Soft shell crab is a bit of a favorite and the tempura was fragrant, crunchy and soft. It remains a favorite. 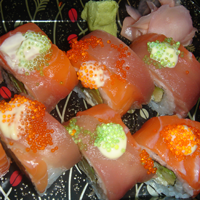 Which is why I went to Hay Sushi later that day to get a soft shell crab roll and a rainbow roll to take away. The rolls were good! The soft shell crab was moist and crunchy in its rice jacket, it’s little legs sticking jauntily up from the end of the roll. I got a glass of water and some wasabi peas as I waited for my food, which was a nice touch. Hay Sushi seats a lot of people so it is not as cosy as Sushiya but I liked the look of some of the things on the menu. There’s an interesting avocado starter, and a couple of nice-looking re-mixes of the ever-popular salmon/tuna, rice and mayo combo. 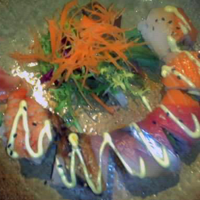 The previous week  I went to Tang’s for the first time. A friend of mine grew up in Japan and will eat sushi nowhere else. They are on Candlemaker Row, down from Greyfriar’s Bobby. The dragon roll was the best I’d had, creamy and with eel as well as with tuna and salmon, and to my delight they had a really good kimchi. Tang’s are a little pricier than the other two and have an interesting menu. They also sell kimchi, which makes me very happy.

Let’s not forget that Yo! Sushi are in Harvey Nichols. I’m a fan of them too but there you know what you get. That’s sort of the idea with chain restaurants: consistent quality and service. I like Yo! a lot but I prefer smaller restaurants like Sushiya, Tang’s and Hay Sushi. Saying that, if Yo! in Edinburgh did blue Mondays (when all the dishes are the same, lower end of the scale price) I’d go there more regularly.

If you’re not convinced about raw fish, go anyway. I lied – sushi doesn’t have to be all about the fish