We’re looking for your food memories

I recently heard a wonderful edition of the BBC’s Food Programme that followed artist Sophie Herxheimer’s mission to gather food stories in and around Margate. As she listened, she’d draw the memory and give the storyteller a copy. Once the idea was sown, lots of food memories came flooding back (You can still see drawings on Pie Days and Holidays website).

What do I mean as a food memories. I don’t mean the ones where you say “oh that was the best meal of my life”. I mean the ones that instantly take you back to a time and place.

I wonder whether I gathered one recently, at the Clandestine Cake Club meeting in Edinburgh? Picture nearly 30 women sampling 20 or so delicious homemade cakes and chattering with people who up to that point had just been a Twitter name. I do hope so. 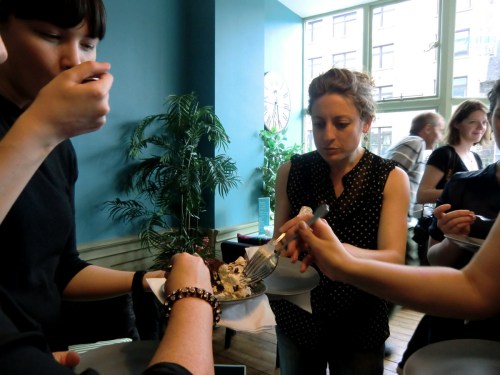 Feasting at the Clandestine Cake Club

More likely, it’ll be something from your childhood. When I was at school we still had cooked from scratch school dinners. I remember little of the savoury dishes, but I know I that’s where I started a lifelong love of rice pudding (which was served with rosehip syrup). On the other hand my husband has complete loathing of rice pudding due to the way it was served at his school.

My Dad’s favourite food memory is his mother making Cornish pasties. As someone born and brought up in London that was a little surprising until I learnt that his grandmother has been born in Cornwall and had passed the dish onto her daughter.

Memories also evoke the first time you tried something. Picture us on a school trip to France and being served some weird sour white stuff in glass jars. Disgust all round until someone added sugar. It was yogurt!

Ian Goodall from Appliances Online , who sell cookers‘s food memory is of celebrating his new found freedom with BBQ goodies ( a massive 1 and a ¼ racks of ribs and a chicken breast lathered in BBQ sauce) after 3 years as a student living on baked beans

So, to inspire you some lovely memories from Edinburgh Foody co-writer Caroline von Schmalensse and the lovely Ruth Clemens, the Pink Whisk @thepinkwhisk

Caroline: “When I was seven, we spent the summer in Menton on the French riviera. On Bastille day we were invited for dinner at a restaurant in the mountains. I don’t remember much of the meal – I don’t remember much about the summer other than it was warm and carefree – but I remember the first course: ravioli. I loved ravioli but the ravioli I had eaten came in tins: soggy pasta parcels filled with dodgy mince and surrounded by faintly tomato flavoured red sauce. This ravioli was completely different. The pasta was white and firm, there was no sauce except a little olive oil and the plump pillows were filled with fragrant herbs. It was ravioli like nothing I’ve had since and food like nothing I’d had up till then”.

Ruth: My Dad was a keen breadmaker. In the way of cooking and baking he did very little, but breadmaking was his Sunday afternoon treat. We would then have the pleasure of his freshly baked bread for our packed lunches at school on Monday. I remember sitting in my classroom one Monday, opening my lunch box and finding to my horror one bright green sandwich and one bright red sandwich. As a joke he had added red and green food colouring to his dough. I was mortified and although my friends thought it was hilarious I couldn’t bring myself to eat green or red sandwiches. There’s something in the brain that tells you it’s wrong – very rightly so! There was hell to pay when I caught up with him, and he never did it again.

Go on, share your memories, and pass the message on!

Check out more food memories in the comments see below