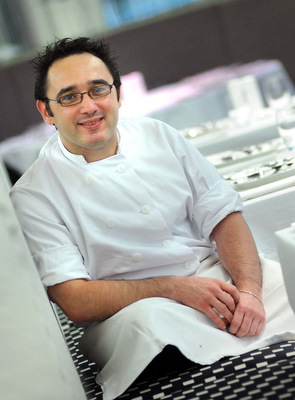 It’s such a relaxing way to spend an early evening. I have a glass of prosecco in hand and I am watching Mattia Camorani, Executive Chef at Hotel Missoni (now  G & V), Edinburgh make pasta.

Our select band are sitting in a corner of the elegant Cucina restaurant, watching Mattia make it all seem so easy.

I’ve been invited to take part in one of the first Missoni Masterclasses and I am thoroughly enjoying myself. Over the coming months Mattia will be sharing the secrets of good pasta and risotto.

Mattia showed very early signs of his cooking talent. Growing up in Bologna , Italy, he loved playing with the pots and pans at home and soon started helping his mother cook. When deciding which path to follow, his mother suggested a career in food.

Later, he managed to talk his way into working  for Giorgio Locatello before heading off to Melbourne, Australia. There he particularly enjoyed the Asian influence to the food and the foodie culture.  After a bad motorbike accident, he returned home and went back to working for Giorgio Locatelli as his chef de partie at Locanda Locatelli. Now Georgio has become Mattia’s mentor and works closely with him to create the menus at Hotel Missoni. Mattia himself has 19 chefs working for him in the kitchen which is open 24 hours a day. 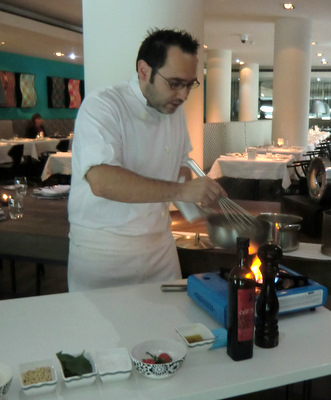 Mattia Camorani creating the sauce for the pasta

Making the filling and sauce

Mattia is now making the sauce for the pasta.

Earlier he had created a filling for ravioli by baking an aubergine whole in foil until soft – having split it first and adding rosemary and garlic. He scraped out the flesh and added parmesan and nutmeg.

To a hot frying pan first, he adds garlic, fresh cherry tomatoes, lets them collapse a little. then whisks to break the tomatoes down. The sauce smells and tastes divine – so simple, so quick. 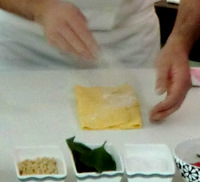 As you can imagine, in Cucina, they make huge quantities of pasta using 4 kilos of flour at a time.  Here it’s a little more manageable – we’re using 100 grams of flour and 1 egg per person.

It really does help to see this part. I tried to take pictures and watch, but I was so fascinated I just had to concentrate! Mattia really does make you feel you could achieve great results.

He explains that the secret to good pasta is how you fold it to ensure you get a good al dente texture.  You need to set strips at different angles (envisage a cross), then keep folding it in 3 as you feed it through the pasta machine adding as little extra flour as possible. You’ll need to do this as much as 7 times. 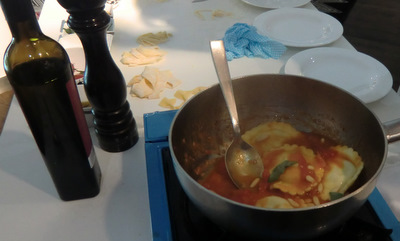 At this stage you can make it into any number of pasta shapes such as tagliatelli and ravioli.  One last tip from Mattia, when making ravioli, make sure that no air is left around the filling, it will stop the raviolo bursting. 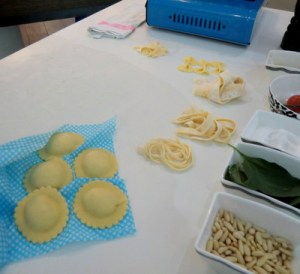 Once Mattia has cooked the ravioli, he gently reheats the tomato sauce and add the ravioli, torn basil leaves and pine nuts. I can assure you, it tastes divine.