Sunday afternoon – it’s all about (cup)cakes

On a Sunday afternoon, I go for coffee. Not every Sunday, but most. Coffee and cake, to be truthful: the cake is very important. Recently, I’ve been eating cup cakes but there are other places for cake and joy in Edinburgh. When you’re up for something a little more normal in size, there are plenty of options.  This is not a comprehensive list. It isn’t really a list at all but quick reviews of three good places for a good cup cake.

Over the last couple of years, the tea house has made inroads into Edinburgh already busy cafe market. With it came cakes. Marvelous, traditional, large and rich cakes. The cup cake rose to new heights of popularity at the same time. I wasn’t always a fan but with quantity comes, eventually, quality. Where before their were dry little cakes with butter icing, there’s now all kinds of yummy bottoms with all kinds of lovely toppings. And glitter. Yes. There’s something vain and pretty about a cup cake that appeals to me. On a Sunday. 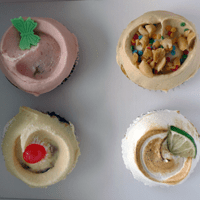 Cuckoo’s fairly new on the Edinburgh scene. Tucked away at the bottom of Dundas Street, a small and bright space offers a few lucky people seating. Here, you can have all kind of teas – from the expected ones to more exotic flavours such as hazelnut – and your choice of 12 types of cup cakes most days. The peanut butter is my favourite. It is pretty as well as tasty. They used to do a dairy and gluten-free cherry that was lovely but there’s not that big a demand for dairy and gluten-free cakes so they don’t carry it anymore.

If you can’t chose, you can take a couple home with you. You get 10% if you reuse the box so hold on to it!

You don’t always get a warm reception at Contini Ristorante (formerly Centotre0 but when you do and they’re not too busy, a cup of their Italian chocolate and a cup cake in the bar is a great way to spend a Sunday afternoon. And get a sugar rush. Their Italian chocolate is thick as syrup and dark but sweet. When it cools it thickens on the side of the cup in a silky mess. Personally, I can’t manage a chocolate cup cake with that, but the lemon one works well. (If the chocolate is too much, I can recommend the Amalfi infusion of rosemary, cinnamon, orange and lemon. Leave it for as long as you can before drinking. It is very nice indeed. Refreshing and not sweet at all.)

Centrotre is primarily a restaurant. By evening, their cup cakes tend to be gone (the runny raspberry goes so quickly I’ve never had one). But then, if you’re there in the evening it should be for a proper meal. The room is large and airy so it can get loud when it’s busy, but the atmosphere is one of fun and high spirits. 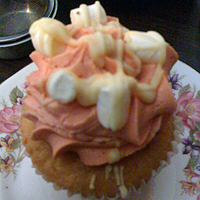 Sometimes a pink cupcake is all you can manage.

Down from two locations to one, Loopy Lorna’s has moved its operations from the bottom of Morningside Road to the Churchill Theatre. The theatre is a larger venue that Loopy’s original home but isn’t quite as charming. Saying that, the cake is the same and that is all that matters. Loopy’s has the cutest tea cosies, all locally sourced. That matters too.

At Loopy, a cup cake is what you have when you’re not hungry. I have never been to a place that offers as large servings of cake, as Loopy Lorna’s. They have a number of teas for you to wash down cake and butter cream with and do soup, sandwiches, breakfast and cream scones for variety. I’m a fan of the walnut and coffee cake (make by sandwiching delicately coffee-flavoured butter cream between a walnut cake and a coffee cake) and the Victoria sponge. The cup cakes are good too: they are straight-up traditional vanilla or chocolate flavoured cakes with colourful butter icing.