Being cooked for is bliss

I love Saturdays. Not just because it is the weekend, but because Mr E F cooks for me. We go to the fish shop (Eddie’s Seafood) and choose something fresh and delicious and that’s all the input I have to make.

Mr E F’s criteria for a good recipe is “not too many ingredients” and in addition to being very tasty, it must be simple to prepare.

Being cooked for is bliss. It doesn’t have to be complicated or difficult.  You don’t have to have a beautifully dressed table with flowers and candles (but you’d hardly say no would you?). It’s the best gift possible. Your partner has taken the time to create something to the best of their ability for YOU. 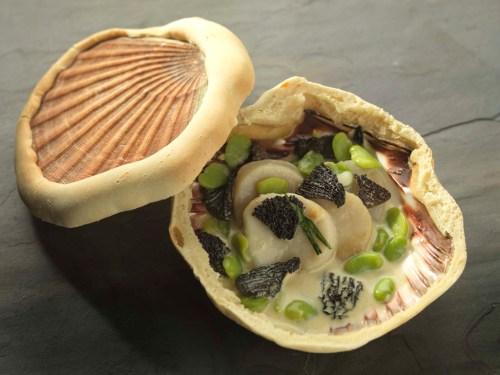 But where to find a great recipe?  Apps are the obvious choice for the those with the right sort of phones – just a matter of keeping the ingredients well away!  I recently received information on the Great British Chefs app (for Iphone and IPad). It has 180 recipes from 12 chefs with 15 Michelin Stars  between them One caught my eye a recipe for Scallops baked in shells from our own Martin Wishart.

He comments on the ease of making his dish:

“Well it’s not too complicated to source and prepare the ingredients. It’s extremely tasty, can be prepared in advance leaving minimum time to only cook the dish and more time for looking after your guest. The serving of the scallop can be done at the table opening them together the steam from inside and aromas are mouthwatering and eating them from the shells its very natural.

“Select the correct wine and music and it’s a winner!”

Research carried out for makers of the App also identified that Scottish women are the biggest foodies in the UK with 28 per cent wanting to marry a chef. The women identified the most attractive quality in a man is the ability to cook.

It unfortunately gives no data on what cooking skills Scottish men are looking for!

Go on make someone’s day. Prepare them a meal and let me know if you use an App to do it .

The App is available from ITunes and costs £4.99.