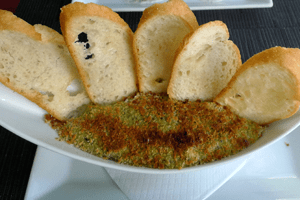 A spinach, artichoke and crab dip starter in Washington.

This year’s American adventure saw me eat spinach and artichoke dip in Washington, Nashville and Austin. It’s not the same everywhere so it’s always interesting to see what you get. Sometimes it’s more cheese than vegetables, sometimes it comes with a crunchy breadcrumb topping. In Washington, it came with crab. That was a mistake because the other flavours overpowered the crab completely. When I got home, I decided that I liked this dip so much that I wanted my own version. 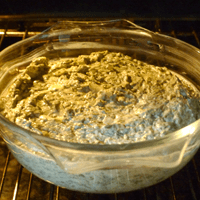 The first step to recipe development is research into what’s there. I found out that traditional recipes for spinach and artichoke dip contain soft cheese and a large amount of mayo as well as the greens. Several recipes also boast “if you don’t like artichokes, don’t worry! You can’t taste them.” It’s true. Most versions of this dip that I’ve had tastes of something not quite spinach, cheese or artichokes: a new amalgam of flavour. To me, this is a problem. I like spinach and I like artichokes. When I developed my version of the recipe, I wanted both flavours to be distinguishable.

This baked dip is great as a starter or a snack. It’s quite a solid dip: baking it doesn’t make it much softer. You can use spinach water or creme fraiche to loosen it. Cooled, it keeps well in the fridge for several days and makes a nice sandwich spread. If you don’t like artichokes, this is not for you: in this dip, you can taste them!

Serves four as a started, two people for dinner and makes a good addition to a buffet. 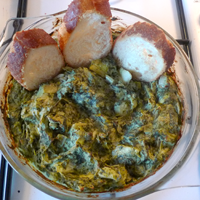 Save Print
Preparation time
20 mins
Cooking time
45 mins
Total time
1 hour 5 mins
American dips are often cheese-rich and baked, an interesting experience for someone who grew up with cold, usually sour-creame based dips. Spinach and artichoke is a popular dip all across the USA and it's really tasty.
Author: Edinburgh Foody
Recipe type: Starter/dip
Cuisine: American
Serves: 2-8
Ingredients
Instructions
3.2.2708