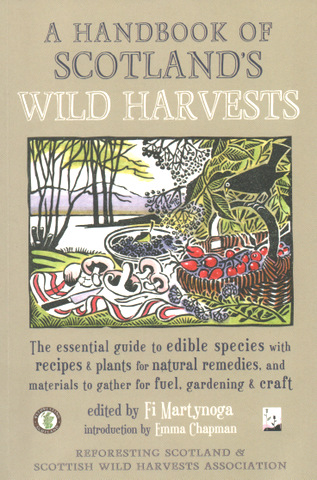 A Handbook of Scotland’s Wild Harvests

Foraging seems to have had a renaissance over the last few years. I took part in a very enjoyable event at the Royal Botanic Gardens earlier in the year and  it was there that I first found that this book,  A Handbook of Scotland’s Wild Harvest was planned. I was then lucky enough to see this book in its earlier stages and now have been living comfortably with the handbook for a few weeks now. We’re definitely getting on well!

In 1709, Dr Robert Sibbald, an early Keeper of the Edinburgh Botanical Gardens wrote an account of species used by people in times of scarcity. Whilst we can hardly compare then to now, maybe it is today’s financial climate that has helped refuel the interest in our natural surroundings.

The book came into being through of a collaboration between two of Scotland’s environments organisations, Scottish Wild Harvests Association and Reforesting Scotland. The results are chapters on four Key Species, further chapters on food and drink; medical uses, kindling and fallen wood and some country crafts.

What it isn’t, is an identification guide. You’ll need to use your favourite tome to identify the plants and funghi precisely and thoughtfully a list of such guides is included.  The emphasis is on safe and sustainable foraging.

What it is, is a pleasure to dip into, which is what I’ve been doing. I love opening a page and reading that section, and thinking  “well, I didn’t know that”. For example, sea buckthorn is not a Scottish native and was widely planted in the 1980s to stabilise coastal areas. I am so glad it was, as the juice combined with other flavours makes a delicious drink, I’ve tried it with apple juice and the Sea Buckthorn and Elderflower Cordial in the Wines, Teas and Cordials chapter sounds wonderful. The wild garlic pesto sounds like a must to make.

The index is a little frustrating at times, a query from a follower on Twitter, led me to try and find the recipe for Nettle Brose. Not finding it in the index, I replied that it didn’t seem to be included only to find it a day later when I was again dipping into the book.  As nettle is one of the 4 Key Species featured, it’s actually in that chapter.

Who is it for?

Anyone who loves learning something new and being led on a journey from one topic to another. It’s an old fashioned book in the best way possible. It truly is a handbook, a fountain of knowledge to dip into. It’s also endorsed by Andrew Fairlie of Gleneagles, and Neil Forbes of Café St Honoré.

A Handbook of Scotland’s Wild Harvests
Edited by Fi Martynoga with an introduction by Emma Chapman.
Published 23 August 2012, £12.95