Brawbars – snack bars that I actually want to eat 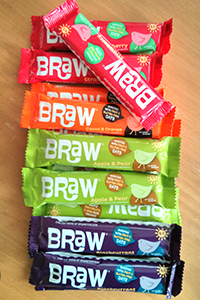 The market for snack bars seems to be growing. Personally, I’m not a huge fan. Looking at the content of most snack bars put me off: they’re often closer to sweets or biscuits than what I’d think of as a snack. I’m not a snacking saint, by any means, but to me, a snack is an apple, a banana, a handful of nuts or a slice of toast. Something small that gives you enough energy, and takes the edge of any hunger just enough so you make it to the next meal. It is not a meal in its own right.

If you read this blog regularly, you’ll know that my partner, C., is a dairy intolerant vegetarian. When he’s strict about avoiding dairy, life becomes tricky. He travels a lot and works long hours, often forgetting to eat breakfast or lunch. For him, a snack bar that he could put in his bag would be useful, something that’s not all sugar and butter but a little more substantial than a pear or tomato. (And less likely to spill all over his tablet.) 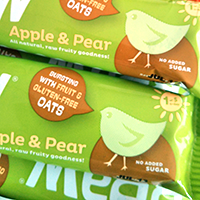 So it was with interest that I came across Braw Foods at Scotland’s Speciality Food Fair in January. Braw Foods make Brawbars, snack bars made from oats and fruit and created with coeliacs in mind. (For those of you not based in Scotland, Braw means good). We were lucky enough to get to take a couple of bars away to try. I shared mine with C. who liked them so much that we bought two taster packs (eight bars, two of each flavour, £6.99). EF also had a gluten free tester who really liked them.

There are four flavours: cocoa and orange, apple and pear, blackcurrant and strawberry. The fruit content is high, so the bars have a natural sweetness and there’s enough fruit to give them a good flavour. Brawbars are pressed which means that they haven’t been baked so qualify as a raw food. We ran out of the first supply quickly and ordered more. 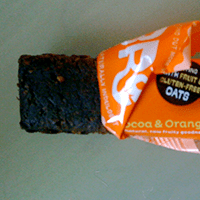 I’m interested to see what else comes out of the Brawbars kitchen. When we were at the stand, we talked about other types of bars: savoury, maybe, or other flavours. I’m all for staying away from convenience foods but these I like and they fill a function. (For C., that function is meal replacement, for me, it’s biscuit, or pre-gym snack top-up.) Half of our second batch is going into C’s suitcase.

Edinburgh residents can purchase the bars at Cranachan & Crowdie.