James and the World Bread Awards

Are you entering the first ever World Bread Awards? With categories for the professional and home baker, it celebrates the very best of real bread. There are just two months to go before the awards, sponsored by Tiptree, close to entries on 31 August 2013.

Ever up for a challenge, I am seriously considering putting my bread making skills to the test and entering the awards. Could I be in for a chance? Perhaps I could ask one of the judges for their advice? 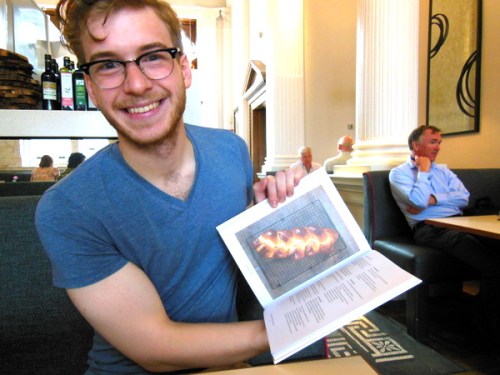 James Morton, finalist in Great British Bake Off is passing through Edinburgh just before his holiday and meets me for a chat. This proves to be one of the most enjoyable I’ve had for a while as we spend all the time talking bread – “bread geek chat” quips James.

James will prove to be a great judge for the World Bread Awards. He was fearless in trying new things on Great British Bake Off and had little time to practice as he was studying for his medical exams at the time. He just “winged it”. He met scepticism from Mr Holywood but almost always won through. And now he’s launching his own bread book, Brilliant Bread (published on 29 August 2013). But most of all, he’s passionate about real bread.

Astonishingly, he wrote 60,000 words in a few months, delivered the draft in January and is today holding one of the very first copies of his book. I’m particularly impressed that he also insisted on baking all the breads in the book rather than have a home economist create his recipes, which is more usual. The breads pictured are simply beautiful. 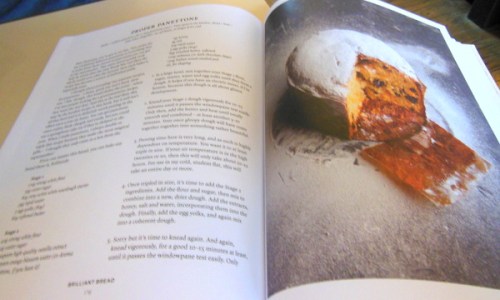 We get to talking about kneading techniques. You’ll know I am a big fan of the method that Richard Bertinet teaches. James is pragmatic. “I call that the slapping method. It’s just one of three methods I suggest you use. I think certain breads actually suit different types of kneading”.

As we talk, I can tell that his book will be just the right combination of advice and technique with lots of inspiration. He wants more young people to start baking. He and his fellow medical student flat mates all baked which he doesn’t find at all unusual!

How to tell your loaf is sufficiently proved is tricky. James suggests giving it a good prod – you should get to know what’s the right consistency, not too soft that it will collapse if you move it, but not too firm. If you have over-proved it, cool it right down in the fridge and you should be able to save it.

What are his favourite recipes in the book? James chooses two. First choice is revival bread. You add a piece of bread from a previous loaf to start the fermentation (mushed up with water first). “I love the fact that it includes a part of all the other breads you’ve made” and the most complicated bread in the book, the panettone. Not for beginners perhaps, but very well worth the effort.

What are James’ tips for those of us entering the competition? “As you need to send the bread off to be judged, go for a sour dough; one with a poolish pre-fermentation starter or sweet bread. These will still be excellent when judged. Bottom line, it’s all about the crust and crumb”.

Reluctantly, we stop talking about bread. James is off to another meeting and then for a well earned holiday. In his third year of medical school, he’s determined he’ll combine his love for baking with his medical career. I’m pleased he’s realised his dream and has written his book. Baking from Brilliant Bread is going to be great fun!

The eminent judging panel includes Xanthe Clay, Food Writer for The Daily Telegraph, Andrew Whitley, founder of the Village Bakery and the Real Bread Campaign and Edd Kimber, The Boy Who Bakes, Phil Vickery, TV chef, and Emmanuel Hadjiandreou, author of award-winning How to Make Bread and James Morton, finalist of the Great British Bake Off. So no pressure there then. They’ll be munching their way through entries in no fewer than 11 categories

will be published on 29 August. You can pre-order from Amazon.