An academic friend of mine, Professor Hazel Hall teaches a class at Edinburgh Napier University on Knowledge Management. At the start of the course, she announces that the class will be learning to knit. Some of the students get written instructions, some get instructions with illustrations and the remaining ones who weren’t quick enough to get either are brought to the front of the class and told that they’ll get personal tuition. So who learns to knit? The students who have the written or illustrated instructions soon get stuck. The students who excel are the ones who are shown how to cast on and are helped when they come up against a problem. We learn so much better when we get the chance to interact. 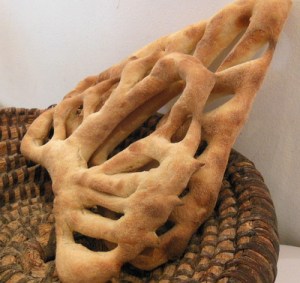 A couple of years ago, thinking I knew plenty about baking, I went on a course at the Bertinet Kitchen in Bath to learn how to make croissants. I can now make a pretty mean croissant, all thanks to Richard Bertinet’s tough but fair teaching. But it was really rather like walking before you can crawl. I had a glimpse of how to manipulate the bread which was so different to the standard method of kneading. It was suddenly like someone said, “I’m sorry you’re riding that bike the wrong way, you have to face backwards instead of forwards”.

I knew I had to do another course to progress further. So, two years later, money saved up, I booked myself on the 5-day baking course. I was in bread heaven. Truthfully, it also felt a little hellish at times as my brain and body didn’t quite get the techniques. But slowly, gradually, over the 5 days I began to remember the right sequence to do things in, weigh the ingredients accurately and what to do when something went wrong (most of the time). 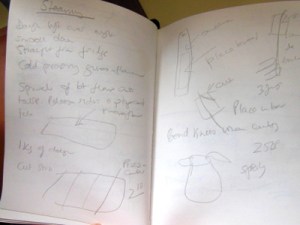 There was a lot of team work too. We did everything as a group of four. So not only did I have to suck up the theory, I had to be sure I wasn’t annoying my team mates and to learn to shut up when the collective decision was one I wouldn’t personally have taken and to own up when I messed up.

The class of 12 included participants from Turkey, Poland, Sweden, Netherlands, Minneapolis, New Zealand, Northern Ireland, Scotland and England. Some worked in restaurants, others baked bread for others on a regular basis, still more were enthusiastic home bakers.

A key lesson was presentation. Each group of 4’s breads were displayed in baskets and critiqued – memories of design crits at university flooded back. Which would be most likely to sell? Which were uniform in size? A bread can be perfect in taste and form, but if it doesn’t have the burst, the eyes are disappointed. 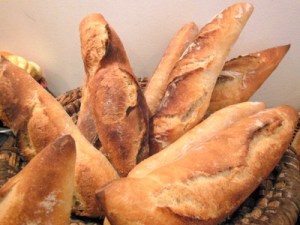 French breads with the all important burst (jagged edges)

The results from day one were actually rather impressive – even professional looking – but looking back after the whole week, they were pretty simple. They were carefully chosen to help us start to manipulate the dough correctly, be accurate and work in an organised manner.

The way Richard teaches manipulating the dough incorporates more and more air into the mixture. You raise your shoulders, you rock on your feet, you stretch and fold. No bashing, no adding more flour. It’s actually what industrial bread machines mimic and it dates back centuries. 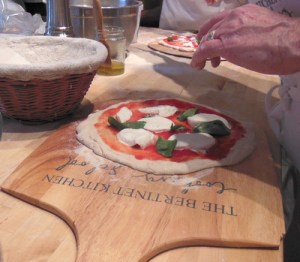 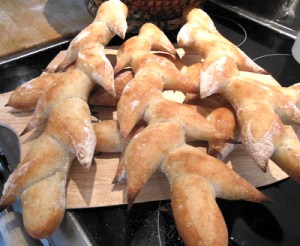 As the week progressed, we tackled French breads. When the baguettes over proved, we turned them into épis – wheat ears. We plaited and shaped – stars were remarkably easy. The third day was full of colour: Italian breads. Ciabatta dough is tricky it’s very wet, but the prolonged manipulation was worth Richard’s assertion that the results breads were some of the best he’d seen. And then we tackled spelt, wholemeal, fruited breads, doughnuts …We learnt how to make dough in a Kenwood, but only after we really understood when the results should be like.

Sour dough did not come into the mix until we’d thoroughly understood the techniques. My forays into making bread with a sour dough starter had not been successful. I kept forgetting to feed the starter and I really didn’t make enough bread each week to warrant the effort. Richard’s sour dough starter was a shock. It was in an enormous plastic box and was far from liquid. We learnt it is far easier to weigh if you can pick up a lump of starter and it certainly doesn’t need so much care and attention as the ones I’d come across before. (Did you know there are people so obsessed with their starter, that they check it into a sour dough hotel to be looked after when they are on vacation?). Of course it needs feeding, but once a week would suffice! 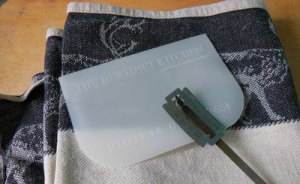 Tools of the trade. Lame and scraper

We left our sour dough overnight to prove in linen lined baskets and spent the last day revisiting and refining our techniques – the slashing with the lethal looking lame really challenged me throughout. I had the advantage that I was staying with family in Bristol, so returned home each night laden with samples of what we’d baked. The last day was no exception.

So heading back to Hazel’s class. Her students would never forget that first lesson and it would inform them how to work to impart knowledge going forward. As for me? The week fulfilled many dreams I had of baking better bread and I’ve managed to make some decent examples since. I’d been pushed, encouraged and driven towards consistency, attention to details and accuracy. I’d met some truly lovely people and had studied under an amazing teacher. If you hear a lot of shouting when a certain celebrity baker’s show is on, it will be Richard’s students shouting “no extra flour” “you don’t need more cling film” and “stop knocking the xxx out of the dough”. Thank you Richard 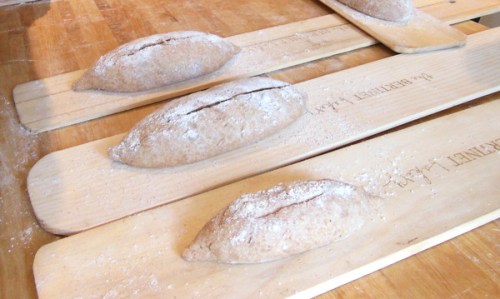 Spelt loaves ready for the oven

What next? More and more practising. And if any bakery out there would give me the chance to come and work with them, I’ll jump at the chance. 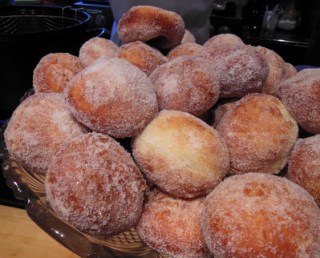 Originally from Brittany in North West France, Richard trained as a baker from the age of 14. He’s lived in the UK for 25 years and opened the cookery school opened in September 2005 in the same month his first baking book, Dough

in 2007. This won  World Gourmand Award for Best UK Book (Baking). He has also published Cook and Pastry. We used both Dough and Crust in the course and were given a copy of Crust; each contain a DVD showing Richard demonstrating the techniques we learned. 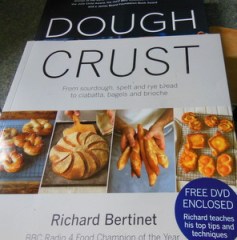 Bread courses are run throughout the year and get booked up very quickly. Find out the latest availability. 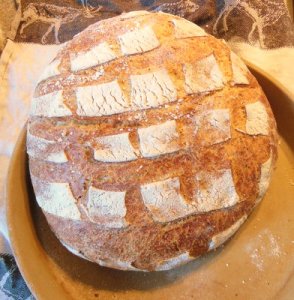 If you’re passionate about bread, join the Real Bread Campaign, for news, inspiration and discounts on bread making course.