Hot from my post on sous vide cooking last week, I am looking at the slow cooker this week. It really seems to be having something of a revival. Caroline has just purchased one and there are many people out there who are passionate users of their cooker on a regular basis. I think you might just be tempted too! 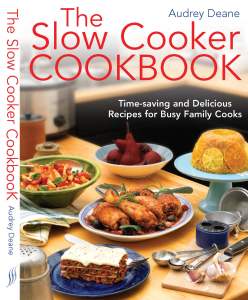 by Audrey Deane is a very reasonably price book with recipes to please the beginner and the more experienced. Kay Devlin is my reviewer for this book. Kay lives in Edinburgh and loves cooking and cooks regularly, but she describes herself as “more homely in style and ability”. She loves eating out at all types of restaurants and eat out about once a week. She is Northern Irish and has lived in the city for 18 years. She has a Morphy Richards 6 litre slow cooker and first used a slow cooker 3 years ago.

Firstly I liked how the The Slow Cooker Cookbook was laid out and the sections covered. At the beginning of the book I found the introduction to slow cooking useful and would be great for someone who had never used a slow cooker before. Personally I appreciate having pictures alongside the recipes and I found the recipes well written.

Since I use my slow cooker regularly, I did not want to try the usual slow cooker recipes like casseroles and chilli as I have taken a long time in developing my own recipes. So I asked my husband to chose a recipe from the book and straight away he chose the salt beef recipe. This was a time consuming recipe but was technically easy. It involved soaking the joint in a brine solution for seven days then rinsing overnight before cooking for 10 hours. The recipe allowed for adaptation of the herbs and spices used. I added fennel seeds.

Preparing a vegetarian stew, prep the vegetables and at to the slow cooker

It took probably around 30 mins in total to prepare the meat at various stages which was good. When cooked the meat was tender and pulled apart easily. I probably would cook the recipe for less time as I would have preferred to slice the beef rather than it pull apart. The flavour was good and I enjoyed the results. I served the dish as per a roast dinner with yorkshires, potatoes, veg and gravy. Leftovers were great too! My only comment would be that the vegetablles used in the recipe are not suitable to eat as they soak a lot of salt from the meat during cooking and perhaps the recipe could have stated this. I would make this again but am planning to try some of the dessert recipes next!

Kaye’s top tip: Buy the size most suitable to your family size and what you wish to do with it.

Cooking and serving the vegetable stew

Stuart Rankin left school a did a bakery/confectionery apprenticeship and was in the bakery trade for 20 years. Now he drives for a living, enjoy all types of cooking, good food and wine and travelling across Europe. He started to use a slow cooker after his wife died and found it was a chore to cook after a long day at work. He describes the purchase of a slow cooker “as the best thing he ever did”.

Stuart started to experiment quite soon after purchase as he hadn’t found recipes that suited him focusing on adapting conventional recipes. Stuart’s top tips:

Anthony Mudge, a choral composer and singer, once hosted a dinner party in which each of the seven courses contained a different gin. He has a thing for goat’s cheese and Viennese Christmas markets

Anthony has a couple of slow cookers. “One of which is a combination slow cooker/rice cooker/steamer and great for making a cheat biryani. The other has a ceramic pot (much better for dishing up from), but however good it is for making stews – I’m making coq au vin for Christmas. The best recipe for for a slow cooker is crème caramel, the massive sort that serves at least six people at a dinner party. Two hours cooking time and once it’s cooled, pop it straight into the fridge ready to serve hours later.

Before you start cooking, make sure your soufflé dish fits into your crockpot! You will need to lift it out when it’s full of hot custard, so it’ll need a bit of space to either side so you can do this without tipping. Depending on the shape of the lid of your crockpot, you may also need to place an upturned plate over the dish to prevent water droplets falling from the lid into the custard as it’s cooking. You will also need a plate with a substantial lip to serve, otherwise the caramel will go everywhere … 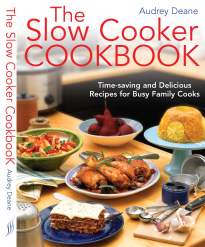 Save Print
The quantities given are for a large soufflé dish, so feel free to divide by two-thirds or half as necessary.
Author: Anthony Mudge
Recipe type: Dessert
Cuisine: French
Ingredients
Instructions
#version#
Thanks to all the people who contributed to this post.

Check out all our cookbook reviews.