For this post I invited Graeme Faulks to review this post. He lives in Edinburgh’s New Town is a keen amateur cook, an avid follower of food and a great lover of wine. 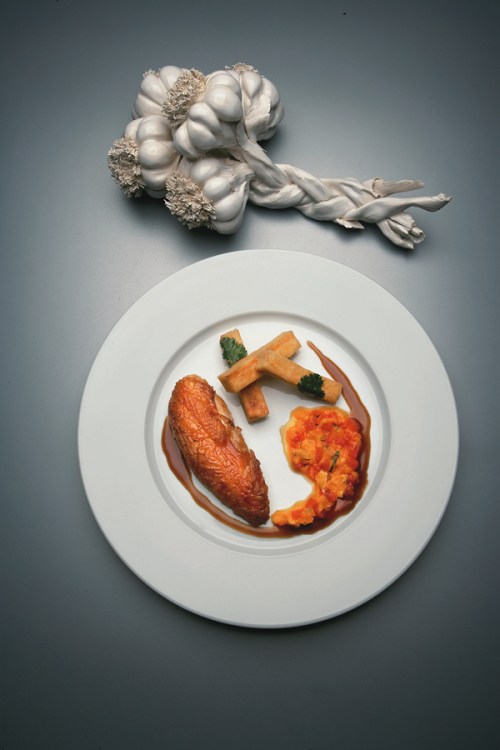 For those of you who aren’t familiar with GQ, it is a monthly, unashamedly gentlemanly magazine (some would say a male journalistic institution) and in September this year they released a cookbook GQ Eats: The cookbook for men of seriously good taste

aimed solely at their usual target audience of the discerning, sophisticated male – even the cover states ‘the cookbook for men of seriously good taste’. With a foreword by Heston Blumenthal I was tempted to accuse the publication of name dropping, but flicking past the foreword it becomes immediately obvious that the recipes are well thought out and have been picked for their technical substance as well as their marketability.

You will find a wealth of recipes to impress (Michelin starred chefs have their own section) as well as a smattering from less stellar luminaries of the restaurant world; they all have detailed descriptions, well-presented accompanying photographs and are neatly categorised into typically manly chapters such as ‘Boys Night In’ and ‘Pub Food favourites’. The cocktail section also offers up creations from legendary bars such as the Playboy Club (continuing on the macho theme) and The Connnaught.

So with all this testosterone and masculinity who did I think would be the best person to try out a recipe on? My more than sceptical girlfriend of course.

Trying not to over awe her with too much red blooded meatiness (steak tartare, cow pie and an entire roast section all feature) I opted to impress her with the chicken and chips. This sounds simple enough, until I add that it is attributed to Michelin Galactico Alain Ducasse, who simply does not do simple.

The chicken required 24 hours of marinating in orange juice, and then several stages of preparation and cooking where it was browned and then simmered in a mix of the marinade, orange, lime and grapefruit rind and juice, spring onions and coriander.

And then there were the chips ….

Of course with Ducasse as the architect it wasn’t anything as straight forward as potato chips. They were to be made from chickpea flour (acquired on a lunch time visit to an Asian food shop on Morrison Street), and required preparation a day ahead.

The preparation entailed 20 minutes of gruelling stirring as the flour cooked out, which I took in turns with my reluctant guinea pig, by then regretting that she had ever agreed to be experimented on.
Then it was refrigerated for at least 6 hours, cut into chips and shallow fried whilst the chicken was cooking.

Finally, serving up looked nothing like the elegant photograph in the pages of the book (do they ever?), but the chicken was moist and citrusy, had layers of flavour, the chips were crispy (tasted mid fry they were limp and floury) and all in all I was pleasantly surprised at the outcome. Even my female partner gave an appreciative nod across the dinner table, although she was less than keen on the unfamiliar taste/texture combination of the chips.

Looking back through all the recipes not one of them is simple, and even with my well stocked, amateur cook’s cupboard I couldn’t make a single one of the recipes without a well-planned shopping trip.
But that is what I like about this book – not its attempt at unabated masculinity, but its presentation of recipes that are interesting and even challenging. It would have been much easier to put together a typically macho assortment of barbecue and steak favourites but this tries to push you to try something new.

Do not be fooled into thinking this is just a gimmicky men’s cookbook as it is much more than that.

However, I do wonder how many owners/recipients of this book would go to the bother of collating all the ingredients for a recipe, let alone attempting to assemble them into a dish. My fear is that it will be given, perhaps as a stocking filler, and that its pages won’t see the light of day through into 2014.But I can be pretty certain that my well-thumbed copy will be in use well beyond Christmas. Save Print
Preparation time
36 hours
Cooking time
30 mins
Total time
36 hours 30 mins
This recipe is from the GW Eats Cookbook with permission This nutritious twist on the classic poulet frites is fun and fruity, but the real genius is in swapping chips for panisses fries, which are made with gram flour. Don’t worry – they taste far better than they sound. You'll need to prepare this in advance
Author: Jocelyn Herland + Alain Ducasse
Recipe type: Main Course
Cuisine: French
Serves: 4
Ingredients
Instructions
3.2.2310

Photography and recipe are both Copyright GQ Magazine 2013 and should not be reproduced without permission.

Check out all our cookbook reviews