Chaopraya: Glenfiddich gives us a night of matching whisky with food 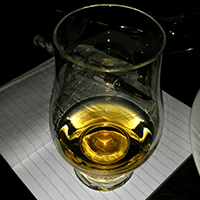 Recently I was invited to Chaophraya to eat Thai accompanied with Glenfiddich whisky. Whisky and food matching is a challenge: I love the idea, but it can be tricky to manage. If you’re used to drinking wine with food whisky can seem too strong, too concentrated. At my whisky-matched meal, I had great fun, great food and fabulous whiskies, but I’m not sure that the matching element really worked for me. I was interested to try a different cuisine and whisky.

Chaophraya is at the top of 33 Castle Street, a great location with great views. We were in one of the private dining rooms, a glass cube with a view of Edinburgh castle. Sitting high on its dark rock, the castle looked rather mystical, lit in violet and blue. As a welcome, I was given a glass of Glenfiddich 12 year-old, poured over ice and server with a wedge of frozen pear. Pear is one of the characteristics of the 12 year-old and this way of serving it highlights it. It made a light, refreshing aperitif and is my new favourite way to drink Glenfiddich.

Spirit of a Nation

As a special treat, we got a taste of the Spirit of a Nation, a 29 year-old whisky created for the Walking with the Wounded charity’s South Pole challenge. It’s a very pleasant whisky: soft, rich and mellow, with lovely hints of leather on the nose and a lingering finish. Our bottle hasn’t been to the South Pole, but that didn’t detract from its soothing flavour. Spirit of a Nation is a great dram. 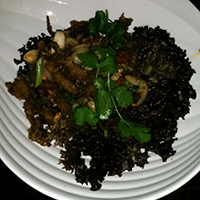 The first course was golden baskets, crisp rice tartlets with a mix of cod and coley in a honey, lime leaf and lemongrass sauce. The tartlet shells were light and crisp, the fish sweet and flavoursome. (A touch too sweet for me – the honey over-powered the fish). With this, we drank the 12 year-old. It worked well, the whisky cut through the honey and refreshed the palate.

Rule number one when matching food and whisky: be generous with the water. Undiluted, the whisky can overpower the food, but with water, new flavours and aromas are released. Watering the whisky also makes it less potent, a good thing when you’re drinking several glasses with dinner.

We moved on to the Glenfiddich 14 year-old Rich Oak and a crispy duck salad. The salad was dressed with a chili dressing that was savoury, fresh and truly hot. Possibly too hot since it overpowered the flavour of the duck, but I enjoyed the scent of fish sauce, the sourness of lime and heat of the chili with the crunchy salad and the rich duck meat. I added a generous dose of water to the Rich Oak whisky to release the full width of flavours and to make last a little longer. A little deeper in flavour than the 12 year-old, Rich Oak has loads of wood character, with hints of Bourbon and spice, even a hint of green leaves. It’s finished in a combination of new American and Spanish oak casks, lending hints of sweetness and sap to the finished product. 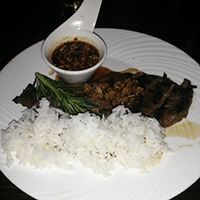 The main was called  Weeping Tiger, a sirloin steak served with a chili dipping sauce, rice and drizzled with a pepper sauce. It was delicious. The charring on the meat added a hit of wood and caramel, and the dipping sauce was tart and hot, but not too hot to let the flavour of the meat come through. The fluffy white rice was great for mopping up the last bits of sauce.

With the beef we drank Glenfiddich 18 year-old which has been matured in Bourbon and Sherry casks. It had notes of Medjool dates and baked fruit, the lush sweetness you’d expect from a sherry cask, and held its own against the umami of the steak. Again, I added a generous glug of water, which opened the nose and added a good helping of fruit, and added silk to the mouthfeel. 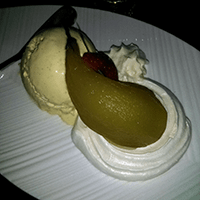 Dessert was sherry poached pears with meringue and vanilla ice cream. The ice cream rested on a thin slice of lemon which kept it in place, and also added a tang of lemon flavour that I really enjoyed. (Note to self: use this the next time you serve ice cream.) With it, we drank Glenfiddich 15 year-old, unique because it’s a combination of whisky matured in Bourbon, Sherry and new oak casks before being married in Glenfiddich’s pine Solera cask. The Solera cask is never completely emptied, but always at least half empty. The result is a smooth and complex whisky that I really enjoyed. There are many reasons why this meal worked for me. The food was good, the drink was lovely and the company was good too. I particularly enjoyed that we tried whiskies from the same producer so that they all had something in common, but highlighted the subtle differences between different ages and casks. I learned a lot about Glenfiddich and how to serve it. James Milne, brand ambassador and our host on the night, is planning another Glenfiddich and food matching event in March. Join their newsletter for news and keep an eye out for what promises to be a fun and deliciously instructive evening.

Photograph of Spirit of a Nation Whisky, copyright Glenfiddich