The Basement Bar has had a Mexican facelift

The Basement Bar is a bit of an Edinburgh institution. It’s been at the top of Broughton Street for as long as I’ve lived in Edinburgh, and it’s always been busy, buzzy and good for a drink. It used to be a bit dark – as fits a basement – and had some really funky pieces of tank-tread furniture. At the back, there was a restaurant, with decent pub grub for decent prices. Both the bar and the menu has had a facelift.  I went to check it out. The Basement Bar’s restaurant and its wall of herbs. 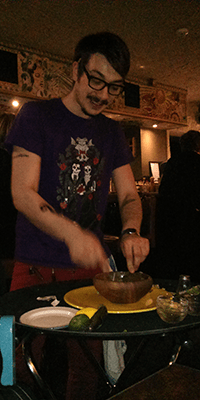 Jason has 90 seconds to impress. That’s plenty of time.

On the way to the Basement, we talked about our best memories from the bar . I remember eating lunch there a few years ago, after a hen-night morning of pole dancing. At the time I worked across the street, so I had lunch in the Basement fairly regularly. I’ve been going to the Basement off and on for years. I remembered it as dark, busy and loud. Walking in to the new Basement was a refreshing change. The walls were white and the furniture and art has changed a lot. It’s still a nice space to be in but it has a fresher, cleaner look.

With the Mexican decor comes a Mexican menu and a whole new drinks list. I’d be able to tell you about the cocktails but I was there on a school night, so all I can tell you is that I want to go back because I’m very excited about the Smokin’ Negroni and the Mexican Stand Off.

The table side spectacle is wonderful and at the Basement, you can have guacamole made at the table.  And why wouldn’t you? It gives you a control over how you want your guacamole (less garlic for me – I want the avocado to shine) and is highly entertaining. So we sat back, comfortable in our well-upholstered seats below a wall of kitchen herbs, and watched the guacamole show. The end result was as charming as the service.

We also shared a plate of roast beetroot tacos, ruby beetroot on pale, soft corn tortillas, with a generous helping of chipotle crema. They were really tasty, and I’m curious about the other taco options too: crayfish and avocado sounds really nice. Other starters are ceviche, totopos (corn chips and dip) and tortilla soup. 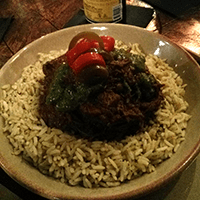 The Chilli Negra was hot and rich. It’s made with Modela Negra beer and the malty flavour gives background depth that the chillies and chocolate that flavour the slow-cooked beef room to play. Served with green rice – rice with herbs – and a concentrated chilli sauce, it’s a warming and generous dish. On the table was a bottle of luminescent green jalapeno hot sauce. It was hotter than I had expected and my dish didn’t need any more heat. I tried to talk C. into using it instead but he turned me down.

Next time, I want to try the fish tacos, but the conchinita pilbil – pulled pork and chorizo with beans and pickled onion – and quesadilla also look good. 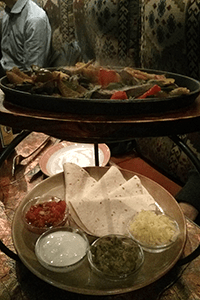 Can you see that smoke?

C. had the mushroom fajitas, which were served on a satisfyingly sizzling plate, perched on a stand, proud above the trimmings of guacamole, sour cream, salsa and tortillas. The mushrooms were portabellos which are often somewhat wet. These slices were cooked to perfection so they were firm and had really good flavour.

I was very nearly too full for dessert but managed to squeeze in charred pineapple with chilli syrup and cinnamon ice cream. On top of the ice cream sat curls of candied chillies. They were a revelation and I want to learn how to make them. They were slightly crunchy, sweet at first bite and then with a growing heat.

The Basement Bar has a place in my heart for all the nights I’ve spent there. It’s great to see it re-vamped and re-invigorated. The new decor is fun and comfortable and matches the food and cocktail menus. I look forward to spending more nights there. 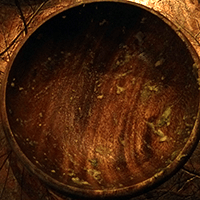 We made short work of Jason’s guacamole.

Photo of the restaurant interior courtesy of Crimson Edge Public Relations and The Basement Bar.