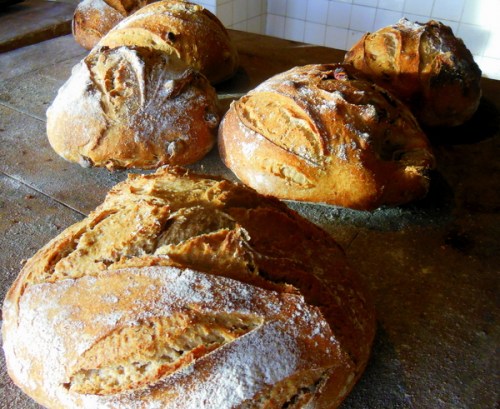 Loaves fresh from the oven

I love a challenge. For me this past year has been all about improving my bread making skills. To check whether I had the stamina and prowess to take this passion further, I decided to head off to France to work in a bakery for two weeks.

Imagine, it’s the second day of my trip. We’re at a small organic market in Honfleur. At this stage, I don’t know which bread is which,  it’s price and am really not too familiar with Euros. Erik, the guy who runs the bakery announces. I’ve got to run some errands. You’ll be OK won’t you? Nothing like being dropped in the deep end.  Good at mental arithmetic in English, I found there was no way I could calculate sums 3 euros 60, 2 euros 70 and 1 euro 40 in my head. Luckily many of the customers were regulars and very patient as I noted the prices totted them up in English, translate it to French and announced what was due.

How did I end up at the Boulangerie Les Copains? Worldwide Workers on Organic Farms (WWOOF)is an organisation that teams up organic businesses with volunteers. You can choose almost any country in the world, just go to that specific website and see what help is needed. I’d participated before so knew what to expect. So, adding an additional challenge for myself, it had to be France, so I could practice my French. You’re given bed and board in return for your help. This is set at 5 hours a day, but I chose to do a lot more 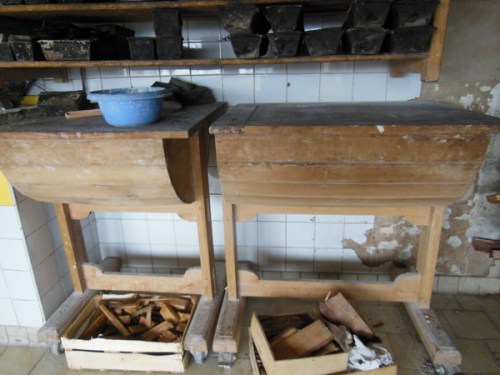 Boulangerie les Copains  (a play on co-operative and friends) in situated in Normandy, about 35 miles from Caen and 10 from Lisieux. It’s in the middle of nowhere, amidst rolling fields, timbered houses and many apple and pear orchards – it is cider country.

Erik, a Dutchman and his French wife bought the buildings about 20 years ago. They were totally derelict. After many years renovated, he bought a wood fired oven in pieces and installed it and renovated the place. Erik is good at DIY, but it seems that it is never quite finished 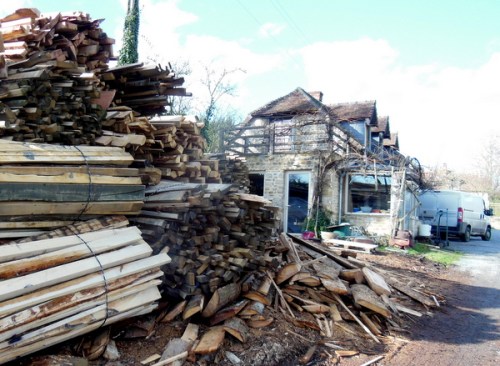 Wood waiting to be chopped outside the bakery

This is a bakery quite unlike any other you might have come across. It’s a square room with lots of windows, there are 5 large wooden contraptions, a little like half whisky barrels on wheels, shelves, scales, tables, sink and the fire. There is no electrical equipment at all. It could have been like this for hundreds of years.  In the room nearby there are sacks of all types of flour stacked in the room close by and  a fridge used for the milk and cheese used.

When its lit and ready for baking, the fire roars and throws out heat. At the moment, it is slumbering. The fire never goes out, but its tame, timid even. The wood is chopped by hand daily. This is fed into a grate at the bottom. Inside the oven itself which is a good 2 metres wide and deep (although not regular shaped) and about 45 cm high, there is a very heavy circular metal object which is placde into the oven before baking begins and is filled with water to add some steam. The fire never goes out, but strangely, wood is actually stacked in the oven when there’s no baking to ensure is it fully dried out. It’s much more fuel efficient that way. 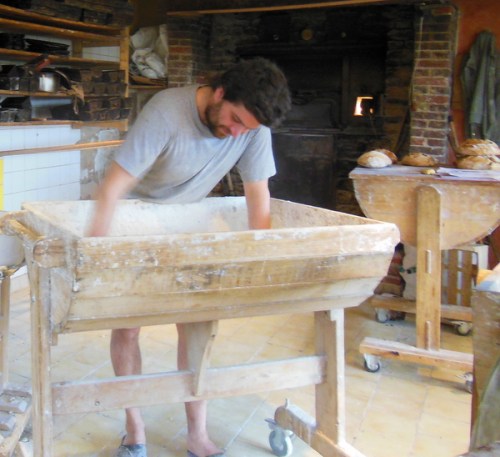 Ok says Manu, you can make the spelt dough. Take 7 pots full of spelt flour. I look at the pot. No measurements? “Make sure that pot is really full. Then add seven pinches of salt, two handfuls of sour dough starter. With your small hands, better make that 3 and then you add 2 bowls of water. Mix and knead in trough”.

The trick is to use the full width of the wooden trough  constantly folding and kneading. I am making 12 kilos of dough, and remarkably, it’s quite easy to do. At no point do I get back ache or feel uncomfortable. Some flours are just plain horrid, the buckwheat is rather like mud once water is added, but spelt is lovely. It comes together beautifully.

It seems I have an advantage over other Woofers (as we’re called) who come, I actually already know the theory of how to make bread. 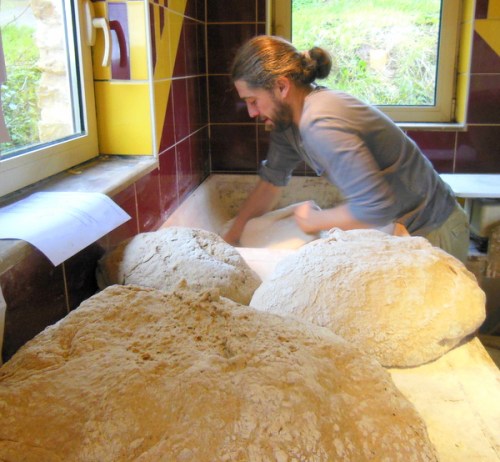 Knocking the bread back

The dough is made each evening (except Sundays) between 5:30 and 7:30 pm. Just before we leave, it’s given a second knead (or knocking back), then it’s then left overnight to prove. Next morning around 5:30, the shaping begins, then baking. Depending on how many loaves are being made, you could be finished by 10 am. At this point, you’re either on deliveries or chopping wood. On market days, the time you leave depends on the market, as early as 7 am, as late as 9 am. If there’s a market the next day, extra kneading is needed and an extra session is fitted in.

The same sourdough (levain) starter is used for all the breads except the Einkorn and Brioche doughs. Different flours are used, wholemeal, demi wholemeal, spelt, buckwheat, einkorn, white. Then fruit, seeds or nuts might be added.  There’s brioche loaves with raisins or chocolate and baguettes made with white or demi-wholemeal. Everything is organic. 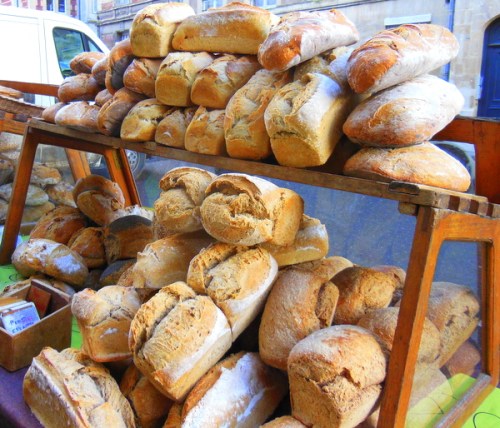 Second Market – this time in Caen.

This is much more fun, largely due to Michel, an ebulliant Bulgarian who is helping out. Panic sets in when the pin for the large umbrella proves to be missing. A local stallholder lends Michel a screw as a temporary fix. The furniture repair shop owner behind the stall arrives, has a look and says, I’ll be back soon. A while later he arrives with a custom made pin that fits perfectly. We never do find the missing one. Everyone just gets on and helps everyone else.

I feel much more in the rhythm. I am pleased to see that Michel who has been in France 20 years, also writes down all the prices to add them up (perhaps he’s working it out in Bulgarian like I do English). Coffees are fetched in turn. Patrick who’s stall is next to us makes wonderful sheep’s yogurt and cheese stands us the first one. No takeaways here, we get a tray of china cups from the café opposite. 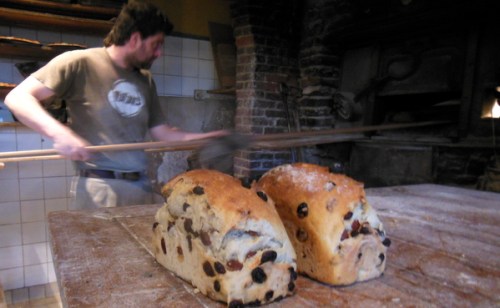 Taking the bread out of the oven

Back in the Bakery

Up until that point, I’d not placed the bread in the oven or take it out. Imagine a very long handled paddle probably 3 metres long that you have to manoeuvre in and out of the oven. You can’t rest it too long as it gets hotter and hotter. You pause briefly, turn to the right and deposit the bread on top of the trough lid. Hoping that it lands safely and does not bounce off. The further you get towards the back of the oven the more difficult it is – the bread seems to become slippery and difficult to catch, and then there are heavy trays to try and pick up too …

On the way to the third market in Caen which is in a different area of the city this time,  I ask just how much bread we’ve made for this market – it’s taken 4 different firings of the oven. It’s 300 kilos I am told. On my reckoning, we must be making 800 kilos of bread in total each week all by hand. There are also pizzas, mini pizzas, financiers (almond cakes) and sablés – a type of shortbread biscuit in their hundreds. ALL BY HAND. This market is fast and furious – we sell all the bread by 1 pm. 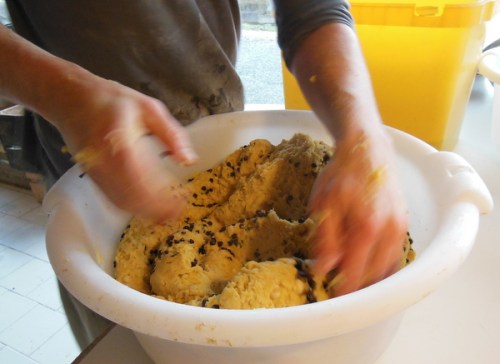 Who buys the bread?

The Boulangerie sells at four markets, 4 shops specialising in organic produce and several AMAPs. This is a type of box scheme where subscribers pay for not only vegetables and fruit on a regular basis, but cider, cheese, bread and jams/ Two local schools are supplied once a week (the bakeries are on a rota) and we supply the cinema in Caen with biscuits. A few people come o buy direct from the bakery.

The Boulangerie is run as a co-op. There are 3 partners, each with an equal share with a fourth baker also working. They each manage to make a reasonable wage and assert that they work no more than 40 hours each in the business. In the summer, there are just 3 of them working in the bakery full time as Erik welcomes upward of 5000 school children – both English and French to the bakery to learn about bread.

The welcome, patience, generosity with time and advice
Learning many new skills
Camaraderie on the market
Meeting the other producers
Proving I could stand the physical pace
Speaking a lot of French
Shopping in the markets 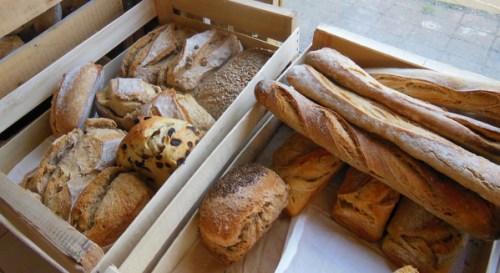 Would I do it again? Absolutely. 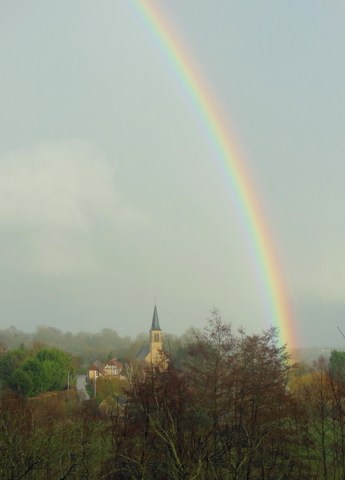 The view from the bakery

When I arrived, the bathroom had a loo and a shower, but no basin. Erik decided that he’d add the basin. Not in the most logical place put in a position that needed all the pipes rerouted. As you can imagine this took some time. “Hurry, hurry” Erik calls “We’ve got to celebrate”. So four of us squeeze into the very small bathroom and drink a glass of cider to toast the completion of the bathroom.

It’s proved to me that I can bake, and can cope with the physical challenges. I am determined to get more experience in a more conventional bakery and do much more baking!

A big thank you to Erik, Manu, Thierry and Seth.