Today’s guest writer is Christopher Garvie, known to readers of this column as C. When we were invited to Innis & Gunn to the launch of their latest beer, C. kindly came with me. Since he’s a long-time fan of the company, I asked him to write up the experience.

The launch was at Innis & Gunn’s new space on Randolph Crescent. The relaxed space mixes the traditional and the new. The presentation space reflects the difference between Innis & Gunn (I&G) and the other new faces in the Scottish brewing scene. It is a confident space, for a brewer who has hits its stride and is able to open up to new flavours, build on the original and willing to fail. (I must confess that I have not been a fan of all of their limited editions, but they have a winner this time!) 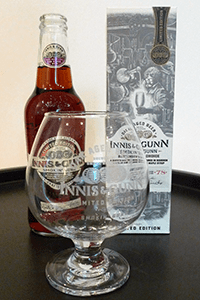 Innis & Gunn Smokin’ Gunn: a work of art inside out.

The high ceilings of the classic new town flat are complemented by a bar and minimalist furniture, to give a very relaxing space to enjoy Innis & Gunn’s new beer. The space feels like a private club or the Scotch Malt Whisky Society on Queen Street, and provides an excellent space for events. Relaxing there with a beer in hand, I decided to suggest their tasting nights for future boy’s night out.

Thinking back to the SMWS on Queen Street, I relived the first time I had tasted the original I&G there in 2003, sitting with a couple of friends by the north facing window of the bar. As we caught up on the joys and pains of our week in preparation for a night on the town (we were much younger then), the barman suggested a new bottled beer they were trialling. It was from a local company, and he could recommend a good whisky to accompany it. The original I&G became an instant hit with our little group. (When we could find it. Those were different days and it is testament to I&G’s success that it is possible to get a bottle in most bars, rescuing many a dull beer selection.)

In 2003, the Scottish/British beer market was yet to enjoy the explosion of new and exciting entrepreneurs we have seen recently. The vast majority of new beers and lagers  came from abroad and Scottish beer innovation was limited to a few small breweries (cap lifted to the memory of the old Caledonian brewery). I only recently discovered the I&G lager and have become a big fan. My enjoyment of that is for another time, so let’s just say it is a smooth and tasty beverage and worth a try.

In the family of new Scottish breweries, I&G is definitely the cool older brother. I&G is successful, lives in the big city, enjoys a cosmopolitan life in nice bars and restaurants and is getting used to the occasional trip to Canada and Scandinavia. While his younger brother is still enjoying the student underground clubs of the Cowgate. 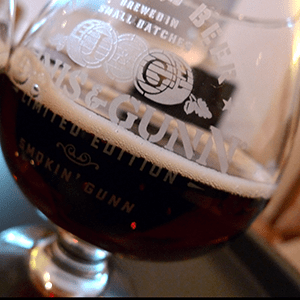 The new Smokin’ Gunn is a genuinely different beer and will find fans with those inclined towards beers, but I also think it will win over many a non-beer drinker. The new beer is the result of Innis & Gunn’s Bartender’s choice programme, a competition of over 300 bartenders from the UK, Sweden and Canada. Smokin’ Gunn was proposed by David Ashton-Hyde, the head bartender at the Hind’s Head in Bray, as a “Sour mash beer with northern brewer hops, rauch smoked malt & maple syrup aged in Jack Daniels whisky casks – a rich beer with a strong fragrant hop, smoky & minty with a Jack Daniels finish”. David is clearly a man of good taste, not surprising considering the owner of the Hind’s Head, and they should feel proud of his tastebuds. (Rauch is a type of malt)

I was only a plus one at the event, Caroline was invited but admits to not being the biggest beer fan. It was hard to tell after she got a taste of Smokin’ Gunn: she liked it very much indeed. Smokin’ Gunn is dark amber, with a subtle aroma of bourbon. The initial taste is a little bitter, but quickly fades to smokey, malty, slightly sweet with a hint of maple syrup and a lovely long taste. Very moreish. This is a beer which quickly becomes a friend and good company for an evening. Caroline found it the first beer she actually enjoyed drinking (a significant step!).

Russell Up provided a range of delicious snacks on the evening. Caroline said that the beef cheek Smokin’ Gunn rarebit was great, but clearly also enjoyed the pulled pork doughnut, the Scotch quail egg, the scampi and the pork scratchings with pancetta and Applewood smoked cheese. The Indian flatbread with beetroot – the vegetarian option – was tasty too.

This truly excellent beer deserves to be marketed as one of the Innis & Gunn core range. It is only available through their online shop, but I hope they are generous and reconsider – if only to support C’s new interest in beer!

See what events are coming up.
Shop online.