Scottish Coffee Festival – all the coffee you can drink?

Dazzled by the lights as we wait for a taster of malt whisky flavoured coffee. (Image courtesy of Scottish Coffee Festival) 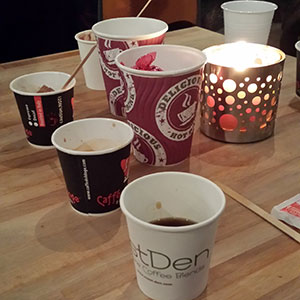 As it was the first Scottish Coffee Festival, we were a little unsure what to expect.  We were sure to find lots of enthusiastic coffee drinkers (especially after the first few espressos) and a collection of the newest and brightest coffee companies.  We saw some old favourites (Artisan Roast’s) and some new companies trying something new in the coffee space (The Roast Den).

Common sense and an imaginary doctor’s note limited our coffee consumption to only one per stall (and stopping around the 7th or 8th coffee). I did get worried about the organisers; politely sampling coffee from each stall, juggling multiple balls as problems occurred and obviously getting more and more wired as the coffees kicked in.

The festival combined food from Drygate’s own offerings and a couple of speciality suppliers, with popcorn from poporopo, ice cream from Mancinis and bits & pieces from Scotmid. That may sound surprising, but after your fourth coffee of the hour I would really recommend chunks of fresh bread dipped in Balsamic vinegar.

The stall holders ranged from very local to coffee suppliers travelling up from Yorkshire, all with their own blends and roasts.

I was unsure what to make of the espresso from Café del doge. I had made the mistake of trying it early in the day and was a bit shocked by the kick from the first sip. It has the classic strength of a well roasted Italian coffee and deserved more respect than I gave it.  A dash of sugar and my second and third mouthfuls confirmed that it was a very nice coffee, but perhaps its bitterness was more suited to lunchtime or after a good meal. The flavour was pure Italy and reminded me of time spent in little Milanese espresso bars, quick coffees while skimming standing at the bar’s counter and skimming the newspaper.

My friend tried a latte from Ovenbird as her first coffee of the day and enjoyed a good smooth coffee.  She felt it was strong enough to taste over the latte and would have been a nice shot on its own. Unfortunately their machine had exploded when I tried to sample their wears!

The Roast Den have an interesting take on selling coffee, offering customers the chance to tailor blend their own flavours from over 50 different beans and roast levels (and a willingness to make quite small batches).  I was unimpressed by their El Salvador which I felt to be far too weak, I got a nutty hint but there was not depth.  With such choice of beans and roasts, I will take that to be an aberration and perhaps reflects my preference for robust flavours.

We are big fans of Artisan Roast in Edinburgh (Bonanza is our house favourite) and it was great to see their Glasgow branch in attendance.  A V60 of their Ruli Musasa gave delightfully floral fruity tones, a slight acidity and a long cherry aftertaste. I think it would have been better as an espresso, but shots of V60 seemed to be the events preferred method of preparation.

I have to confess that I didn’t try Mancinis’ ice-cream myself (not being a fan of dairy products), but the feedback of the group was very positive.  The chosen ice-cream was an affegato-ish combination a very creamy vanilla, a dod of mascarpone and a sticky caramel sauce, topped with crushed Italian biscuits and a steaming espresso (it was a coffee festival). The contrasting texture of the biscuits and the slight sharpness of the mascarpone added something and helped clear a few palettes.

There was a Costa Coffee stall, but I decided to forego their offering. Not out of an intended slight, simply in an attempt to reduce my days coffee intakes to a manageable level.

My friend was impressed by the coffee from Coopers (suppliers from Huddersfield).  They were producing their coffee with a number of different methods, and he enjoyed the chance to sample differing styles. Unfortunately he enjoyed them too far much and kept them all to himself. Therefore I can only conclude that they are doing a very good job.

It’s not all about coffee 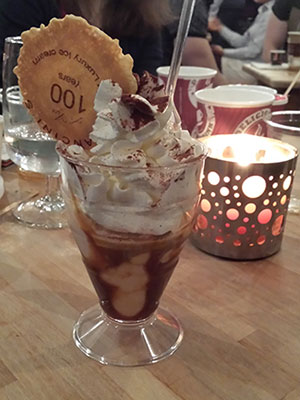 Ice cream with mascarpone, caramel and coffee is yummy!

A real highlight was Drygate Brewery’s and Gordon Street Coffee’s gorgeous coffee stout. After a short debate about sampling alcohol before midday, we gave in, sampled and were impressed.  The stout was rich, malty with a long treacly taste – very reminiscent of coffee.  It was a big hit at our table and I would very happily quaff it again.

After such a wonderful collaboration I was disappointed by the whisky flavoured coffee from Scotch malt whisky coffee. It had a mildly alcoholic nose which could have been whisky, but I was put more in mind of a bad chocolate liqueur or a Swedish dammsugare cakes.  The coffee itself was weak and had an unpleasant aftertaste.

I was interested by Tempo Tea Bar as I have heard about bubble tea, but will admit to being put of by the look (tea shouldn’t have things floating at the bottom of it). Caroline sampled but wasn’t blown away by either the flavour or the tapioca bubbles.  I fear we may not be their target audience and have to admit to being a stick in the mud (only drinking coffee as espresso / Americano and tea is always black). I now appreciate that I was trying to taste it as a tea and my thinking should have more in the dessert space.

The offerings from the Pittenweem Chocolate Company contrasted nicely at the event, with delicious hot chocolate and received much praise amongst our little group.

The first Scottish Coffee Festival was a great success with a mixed group of coffee experts, and truly showed the variation that exists in the Scottish market (and changed the minds of some of little group that all coffee is the same).