International whiskies – glorious drams with the Whisky Belle at SMWS

When the Scotch Malt Whisky Society asks me if I want to come and try whiskies, I say an enthusiastic yes. This time, the invitation was particularly intriguing: an international whiskies tasting. Two Japanese grains, two Japanese malts, an Irish whiskey and an American bourbon. To guide us, we had whisky Ambassador Annabel Meikle, aka the Whisky Belle. 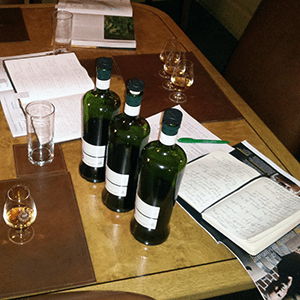 Before the guests arrive: notes and glasses.

SMWS provides a very special product: they buy casks of whisky and bottles them. What you get is a unique bottle, unmixed and undiluted. There’s a joy and a sadness in every bottle: the greatest dram you’ve ever had will not be coming back again. Once an out-turn is sold, it is gone. Luckily, members can visit the SMWS sample rooms and try drams, and when they fall in love, they can bring a bottle home. On the night in question, the bottles weren’t out yet which was just as well because I couldn’t afford to take home everything I fell in love with.

It’s rare that I try six different drinks in a night and it was an good reminder that your palate reacts differently when you eat and drink. I was reminded of this when going back to the first whisky after trying the third. My impression of it changed.

We started the evening with 117.3, a 25 year old Irish single first-fill Bourbon cask.

It had a sweet nose with a hint of something chemical which I eventually decided was pine sap. Other testers got black currant leaves: it is a delightfully green and fresh dram. The description the tasting panel gave this whisky, ‘Hubba-bubba mango and monstera’, reflects its flavour by bringing together tropical fruits and rubber plants.

When I came back to this after having tried another couple of whiskies, the nose gave me a juicy, undeniable hit of elderflower, something I don’t think I’ve experienced in a whisky before.

We also tried a single-cask Bourbon, B3.1, which had the characteristics I like most in Bourbon: grass, vanilla and syrupy sweetness. It was a three year old and made from corn, not rye. Diluted, it was a little less fiery, with more toffee and a hint of mint. 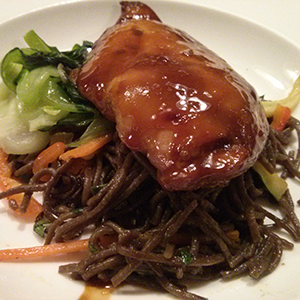 The SMWS looked after us very well indeed? At half time, we have chicken and noodles.

Grain whisky gets a bad name. It’s the base for blended whiskies but that doesn’t mean it’s a blank canvas but rather, as Annabel pointed out, the foundation the other flavours play against. Earlier this year, Diagio launched Haig Club, a grain whisky sold to the ‘I don’t like whisky’ market. I haven’t tried it – I’m nowhere near the demographic – but I’m curious to see how it fares. I’m curious about grain.

The grains that we tried were distinctly different from many Scotch whiskies. Where malts are made with barley, grains can be made with a range of cereals – rye, for example, wheat, or corn. The first Japanese grain, G12.1, an 11 year old whisky, was made with a mix of cereals. It was a dirty honey colour and a had a strong scent of banana. It’s full of tropical flavours, with ripe banana on the palate, as well as toffee and maybe a hint of marmalade.

The second grain, G13.1, was a four-year old but had a lot more character than I would expect from something that young. The other testers reported brown bread and sweetness on the nose; I got apple cider vinegar and vegetable oil. The palate was very different: fiery apple flavours meant that this reminded me strongly of calvados. Adding a bit of water changed the mouthfeel and made this really viscous, almost chewy. With its great character and fabulous amber colour, this was a revelation. I preferred it to the older grain.

And then the malts

My favourite of the Japanese malts was 116.30, a 26 year old, peated whisky. I’m a huge fan of smoke flavours so was very excited about this one. On the nose it gave smoke and a hint of sweetness and pink pepper. On the palate, it was one of the cleanest smoke flavours I’ve come across. Yes, it made me think of tar and smoked reindeer heart, but the overall impression is of smoke. Not overpowering bonfires, just clean, fresh smoke. It wasn’t cloying or argumentative. It was as if someone set out to capture the essence of smoke.

119.15, an 11 year old Japanese malt, was called ‘Raspberry imperial stout’ and many of the tasters got a strong scent of mint from it.I got sweetness, almost Coca Cola, on the nose, with water coffee and syrup. The palate gave Christmas spice, heat, hints of coffee, and sherry. I picked up the raspberry too, but not the mint. Watered, it mellows a little. The texture is soft and light, and  it offers up more Christmassy flavours like julmust and cloves.

We had fun discussing colours. 120.7 was nutbrown, where 119.15 was light coffee in flavour. The first time I tried 120.7, a 14 year old Japanese malt, I got the scent of treacle – all sweetness and licorice. On the palate, it gave caramel, leather, coffee and dry sherry again. This was a very masculine malt, in that it reminded me of leather, wood and tobacco. It was warming and cosy. 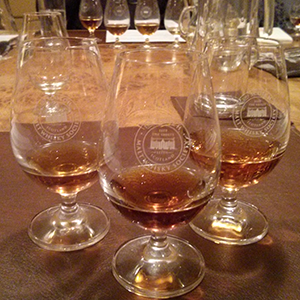 The bottles we tried are available from the SMWS this month. If you fancy something special for Christmas, and you’re a member, go and try them. Some bottles are available on their own, some of them are sold in pairs. These are not cheap bottles, by any means, but you get something unique, rare and very special for the investment. I feel privileged to have tasted these drams and clutch the memory of 116.30 fondly to my chest. It was an astonishingly good dram, and stood out on an evening of great whiskies.

The Whisky Belle on Twitter. We also had another lovely tasting with her at the Scotch Malt Whisky Society