The Scotch Malt Whisky Society throws a fun party. Last week I went to the Queen Street club for hauf ‘n hauf a beer and whisky tasting, an event that was part of Clans & Drams, SMWS’s celebration for whisky month.  I made my way up to the second floor and a room with several islands of dining tables covered in white linen. I took my seat at one that still had spaces and waited for the fun to begin. 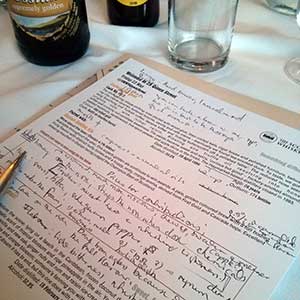 Careful, if messy, notes help me remember my impression of the whisky and beer I’ve been trying.

First up was G3.3, a 26 year old grain whisky from the distillery that was once at Haymarket. There’s nothing but flats where the distillery stood. It was a rich gold colour and had notes of honey and apple on the nose. At 56% it was strong, so I added a little water which changed the mouthfeel completely and made a chewier, sweeter and greener drink. I got notes of grass, toffee and schezuan pepper.

The beer that was matched with it was Ossian Golden Ale. Inveralmond’s head brewer, Ken Duncan, talked us through how to taste a beer properly. We had the wrong kind of glasses, but we got on OK. Ossian has citrus on the notes, and something a little like Turkish delight and syrup. It’s refreshing and has only light bitterness. All palates are different so don’t be put off by my tasting notes: the official tasting notes for Ossian mentions fruit, nuts and zesty oranges.

The audience for the tasting was mixed. A group of Swedes shared one table with a couple of Americans, and there were visitors from other countries too, but most of us were Scottish. Most of the people at my table were Edinburgh based, even. To my left was a party for someone’s 30th, and to my right, three whisky-lovers were treating themselves to a good night out. We had fun and after the first pairing, conversation flowed easy and fast.

The second pairing became a favourite at our table. The whisky was 36.69, a pale gold with hints of green and long, long legs. It had honey, paint thinner and pineapple on the nose, spun sugar, melon and citrus on the palate. Watered down a little it opens up and becomes even more tropical. (I love the SWMS’s tasting notes: ‘White horses splash your glass and release waxy lemon skins and orange blossoms; someone’s fanning you with a palm leaf…‘ I hope one day to have knit palate and imagination into the kind of experience their descriptions deserve.)

It was paired with Sunburst Pilsner, a Czech-style pilsner which gave me soap, coca-cola, and pears on the nose – clean, interesting scents. When I tasted it, I got caramel and mellow bitterness. Interestingly, a good swig of the whisky followed by a long sniff of the beer brought out depth and interest. A good swig of beer then cleaned the palate of whisky so we could start sniffing and tasting again. It was an interesting, and enjoyable, effect.

Luckily, we paused for food between the second and the third, and final, pairing. Refreshed with healthy helpings of bangers (whisky and pork, and beer and pork), mash and cabbage, we were ready for more whisky. 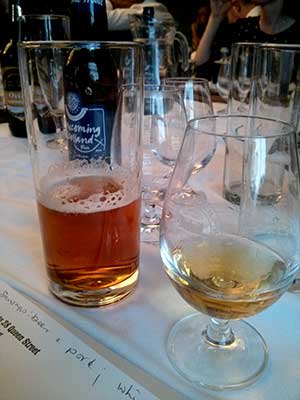 Homecoming matched with 3.197. A pleasant pair.

3.197 was an Islay. It had gentle BBQ smoke on the nose and hints of sweet stuff, like syrup and caramel. It was a deep gold colour, as you’d expect from a Sherry cask. The Sherry came through on the tongue, where a blend of Sherry, smoke and chili spice made a happy blend.

The matching beer was Homecoming Beer. It gave me flowers on the nose and licorice, treacle, and light bitterness on the palate. It was clean, a little minerally and not too complex. It allowed the whisky to shine.

While we tasted and enjoyed our drinks, Kenny gave us a mixture of anecdotes and data about the brewing business. It was a fun evening, informative, entertaining, filling and full of interesting new flavours. If you come across a similar event, try it out!

Find out more about Clans & Drams – the tasting rooms are open to all for the month!