I worked in the Scotch whisky tourist business several summers and am a card-carrying member of the Scotch Malt Whisky Society so it will come as no surprise that American whiskey isn’t my first choice. Saying that, over the last few years, I have developed a soft spot for a Manhattan, a sweet blend of vermouth and bourbon which developed into a general liking for the neat spirit. I’ve also tried some very good international whiskeys. My eyes have been opened.

All the whiskies of the world have something to offer and I enjoy the green sweetness of a fresh oak cask. It makes me think of tulip stems and green grass. So I was delighted to be invited to 99 Hanover Street Bar to meet Drew Mayville, master blender at Buffalo Trace, and taste some of their rare whiskies. 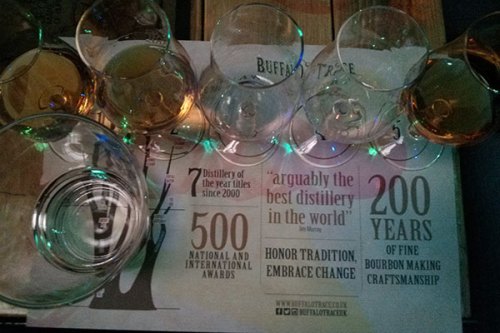 Glasses waiting to be filled.

The difference between whiskey and whisky

American whiskey has a very different flavour from Scotch whisky due to the fact that they have to use fresh oak casks to mature it. It’s the sap and other active chemicals in the fresh wood that gives the spirit that very special flavour shared by all American whiskeys. Bourbon is American whiskey made with a majority of corn in the mash; American rye must have a majority rye. Bourbon distillers add rye to their mash for spice, wheat for soft, sweet honey flavours and barley for malty flavours.

The Buffalo Trace distillery has been in the same location since 1773 and got its current name in 1999. It’s had an interesting history: surviving several floods and prohibition. (The latter because whiskey was prescribed by doctors for medical use.) It’s a National Historical Site, one of the few such sites that is still in operation as a commercial manufacturing site. Drew Mayville explained that one of the reasons that the distillery has lasted so long is that it makes a great product but also that it’s always been looking to quality and innovation. They were the first distillery to have steam power, the first to market a single barrel bourbon (1983), and the first to have temperature-controlled aging.

The innovation at the distillery is fascinating. They have an experimental warehouse, called warehouse X, where they can control every variable – from temperature, to light, to airflow – to see which affect the maturing spirit and how. I’m intrigued to find out more about their current experiment with light: will sunlight on the outside of a cast affect what happens inside it? Considering that most warehouses are dark, this is a very interesting question. It was raised when a tornado ripped the roof and part of a wall of a warehouse and a number of barrels were exposed to the elements while the warehouse was re-built around them. Those barrels tasted distinctly different from the other barrels in the warehouse.

There’s often an element of mystery to the process of whisky making. I like that Buffalo Trace are trying to minimise the mystery and maximise the science. That’s how you get consistency and learn how to develop new, interesting expressions with some accuracy.

The proof is in the tasting

We were an exited bunch collected in the snug at the back of 99 Hanover Street Bar on a Saturday afternoon. It was too dark inside for good photos, but light enough that I could find my glass. And that’s all that matters.

The first drink we tried was White Dog, basically the distilled, un-aged liquor. I’ve tasted a couple such liquors before, from Scotch distilleries, and I didn’t much look forward to it. They are too strong, too chemical in composition for me. Rough. White Dog wasn’t too bad and I imagine it could be used in cocktails, but it’s not something I’ll be looking for. The main reason we had this is that it is the root of two of the other spirits we tried and it was interesting to try to trace the matured liquor from the raw spirit. The first of the matured spirits was…

Buffalo Trace, the eponymous standard expression, is an 8 year old. It has sweetness, esters like pineapple and pear were both mentioned, and I got grass and vanilla on the nose. On the palate there’s sweetness but also a bit of spiciness – a tingle more than actual heat – followed by a slight dryness. It’s clean and ends with a hint of crushed flower stems. It stands up well to a drop of water.

Eagle Rare is a 10 year old version of the same recipe that’s matured in a different place for a different taste profile. It’s a lot deeper on the nose, with caramel notes. On the palate, it has almost a Scotch quality. It has a longer finish, is less sweet, more rounded than its younger sibling and has an oakier finish. Rather nice.

Sazerac Rye 18 is an 18 year old straight rye, which means it’s made with mostly rye and corn as the secondary grain. On the nose, this was full of treacle and that scent that I think of as ‘green’, rhubarb and pear was mentioned by the other tasters, and it had a hint of Sherry. Drew said to think of cognac when we tasted it. I did and that was the flavour I got. It’s spicy, fiery, sweet on the nose but big and dry on the palate with an up-front cognac character and a bourbon finish. I hope I have this again, sometime. It’s almost impossible to get or I’d buy a bottle.

William Larue Weller is a wheated bourbon. On the nose, there was something chemical, but pleasingly so, both warm and slightly sour. On the palate the chemical element resolved itself as pine for me, mint for others. I tasted sap and loam. With a drop of water, this became spicier, and softer. It was unfiltered so had a lot of flavour and at 67% ABV it almost exploded in the mouth, turning into a delicious vapour. It was an interesting dram, one that I wanted to linger over. It was my favourite and the first one I finished.

The last of the whiskeys we tried was Stagg Jr., an 8-9 year old bourbon with a good dose of spicy rye in the mash. It’s uncut and unfiltered and released four times a year. On the nose, this was sweet and green, on the palate, it was spicy, intensely hot on the tongue, with flavours of honey mead and cut grass. This too was really good although by now my nose and palate was getting tired.

It was time to chat with some of my fellow guests, finish one or two drams and then head out into the sunny afternoon. My mouth was sweet with bourbon and I had a lot of new flavours to think about on the walk home.

The distillery is in Kentucky, USA. If you’re in the state, you should visit. Meanwhile, you can follow their UK adventures on Twitter, or see what the distillery shares on Facebook.