Street food: the rise and pull of exotic fast foods 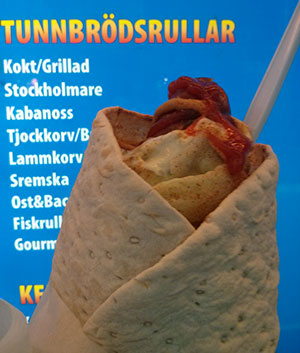 A tunnbrödsrulle with chorizo and Boston pickles. Satisfying and very, very tasty.

Last Friday I was running an errand for my mother, it was early afternoon and I was hungry. I decided to have a hotdog.

Hotdogs is the fast food I grew up with. They are everywhere in Sweden: you’re never far from a hotdog stand and dogs turn up at picnics, barbecues and childrens’ parties. Hotdog outlets — korvkioskar — are traditionally a meeting place for youth as well as a handy stopping point for hungry shoppers.

As I ordered my chorizo1 flatbread2 with pickles Boston-style3 it struck me that I was about to eat street food. This was it, the traditional Swedish on-the-hoof snack. We’re fond of hamburgers too, but often eat them sitting down. Hotdogs, however, are an outdoors food. Yet, when people mention street food, hotdogs are not what I think about. Instead, my mind fills with thoughts of noodles and stuff on a stick. 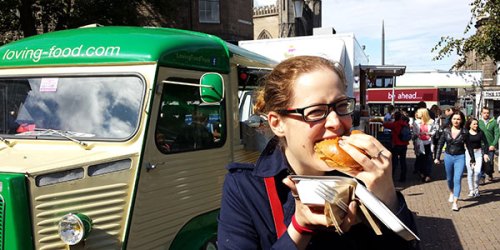 Stuffing my face with slow cooked ox cheek in a brioche bun from Loving Food. 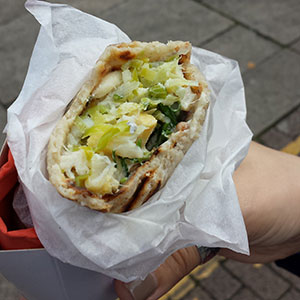 A Scoff potato scone wrapped around cullen skink stew. I ate half of it before remembering to take a picture.

Street food has become very popular, indeed fashionable, in Britain and Europe over the last few years. Not just the traditional local street foods – the Scottish poke of chips, the Italian pizza slice — but international street foods, and anything served from a cart or van.

Earlier this year, we went to the Scottish heat of the British Street Food Awards. We ate as much as we could, making sure not to have the same dishes, and voted for our favourites. The variety of food was encouraging: slow-cooked beef cheek, pizza, potato scones, dumplings, noodles and salad were all on the menu and the market was teaming. Market faithfuls Jones & Son did pulled pork buns, managing to hit two trends at the same time.

Mum told me there are food vans in Stockholm now, serving all kinds of interesting food. I’ve only ever eaten from the herring van4 at Slussen, back when it was the hotdog stand’s only competition. Now, street food has a real buzz, to the point where I look for it instead of waiting for it to come to me. That’s a crucial change. Where once street food was convenience food, something you ate because you’re hungry and it was there, it’s now something you seek out. 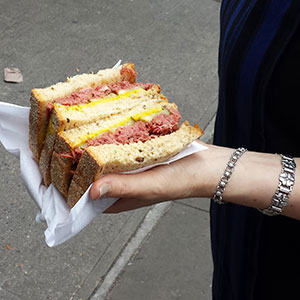 When I was in London in August, for example, I made a point of going to Borough Market to eat. I’ve been there before, to soak up the atmosphere and enjoy the crowds, but this time eating was my focus. And it’s not just me. There are now restaurants that serve street food — Ting Thai Caravan, for example, and Tuk Tuk. Personally, I think the street food restaurant is an oxymoron: to me street food is food you don’t eat in a restaurant. It’s one of the things that makes the food cheaper: a restricted menu and lower overheads in term of staff, rent and equipment. Street food outlets that show how that street food can be good value and exotic are Tupiniquim on Lauriston Place, and Bollywood the Coffee Box at Bruntsfield Links. Both are old police boxes put to delicious use. Union of Genious takes their soup on the road with their soup van, to be found at George Square most days.

At its best, street food is convenient, cheap and delicious. It makes sense to me that it reflects local tastes and ingredients, but I love that they don’t have too stick to tradition too closely. There’s a world of flavour out there and we are in the privileged position to sample its flavours right here, in our own town.

1 In the beginning, there was the Frankfurter, at least I think that’s the closest thing to a Swedish hotdog. Now, there’s a plethora of other sausages available too. I remember the introduction of the chorizo in the late 80s with fondness.

2 This is a traditional Swedish tunnbröd – flatbread – a large soft circle of wheaten bread, usually flavoured with cumin. Three ice cream scoops of silken powder mash are placed in the middle and the hotdog on top. Ketchup, mustard and any extras (pickles, prawn mayo, chillies) are added before the whole is wrapped like a burrito with one open end.

3 Finely chopped sweet pickled gherkins with mustard seed mixed with mayo. Lush! I don’t think they’ve ever been to Boston.

Where to find street food in Edinburgh 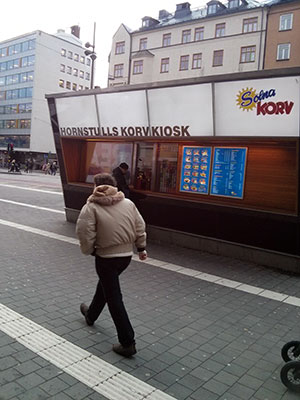 My local korvkiosk. A one-man lunch station offering all things sausage and burger.

The traditional outlets are fish and chip shops and kebab shops. In this article, I’ve focused on the more exotic street food options. Below is a list of the one’s I’ve mentioned in this article. It’s a short list compared to what’s available. I’d love to try more: let me know what your favourite street food place or dish is.

Indian food for vegetarians and omnivores, from samosas to curries. Great to take home, or eat in the park.

Pulled pork rolls and specialist barbecues, these guys fill the bellies of the hungry at the Tram Stop and other markets.

This green food truck is most often found opposite Stirling Train Station but sometimes visits Edinburgh too. They sell delicious, seasonal foods.

One of their recipes featured in Cauldron Food’s Street Food recipe book.

The inventor of the cullen skink tattie scone. Honestly one of the most satisfying and comforting dishes ever invented. Can be found at Tram Stop and other markets.

The Tram Stop Market plays host to a wide variety of street food vendors. Visit on a Taster Day (the second Saturday of the month) and see who is there.

Indian street food in a modern environment. Pick and mix dishes like you would tapas.

Gluten-free Brazilian savoury crepes with lovely fillings for meat-eaters and vegetarians alike. If you fancy a sweet one, that can be done too. They also serve fresh and tasty juices.

Union of Genius soups are served from Dumbo, the soup van, between 10:45 to 14:30 (or until they run out), Monday to Friday, during term-time. You’ll find Dumbo at the north-west corner of George Square. Look out for Dumbo at Edinburgh Farmers’ Market on Saturdays and Stockbridge Market on Sundays.