Get hooked at Meat Hook, Edinburgh

CC and I made our way to Mathers on a sunny Edinburgh lunchtime in March. We both realised we’d never visited this establishment before. 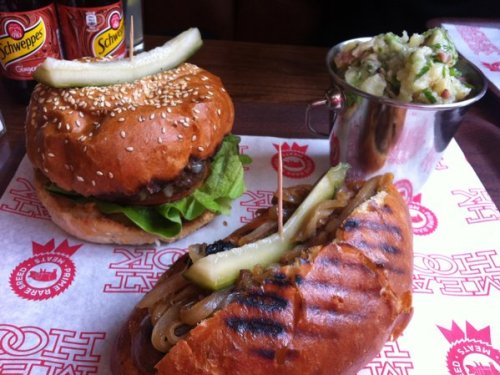 Caroline’s recent article on street food opined that restaurants can’t really sell street food that has to be found on the street, being sold from vans. My first encounter with street vans was in Portland, Oregon some years ago. Here, the vans specialised in selling one thing, and that one thing very well. So, much as I agree with Caroline that I can’t really call the food at Mathers street food, that’s what it is essentially: homemade sausages and burgers just as you’d find on the streets. 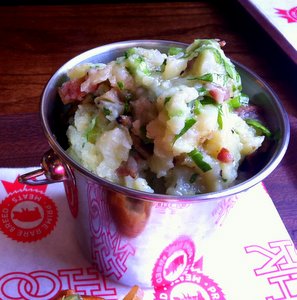 Let me introduce you to Meat Hook a ‘Sausagemonger and peddler of prime Scotch meats‘ who have taken over the kitchen at Mathers.

Meat Hook is a partnership between Angus Mackinnon and Duncan Alexander. Angus was previously a chef on chartered yachts and in the music industry, touring with acts as diverse as Prince, Neil Young, Kate Bush and Britney Spears. Duncan’s history lies in front of house roles, with management positions in various Edinburgh bars and restaurants , most recently at The Vintage, Leith. They quite daringly booked up for a 6 weeks stint at St Andrews Square Market selling food over Christmas and haven’t looked back since.

CC and I were given the chance to try several of the dishes from the menu.

How many of you have tried a warm potato salad? I can see you wincing from here. I promise you that the Meat Hook salad is a thing of beauty. It is like no other potato salad you have ever tasted. We could have sat there and just eaten buckets of it, it was so delicious. This wonder accompanies any of the items in the Sausage Grill section. 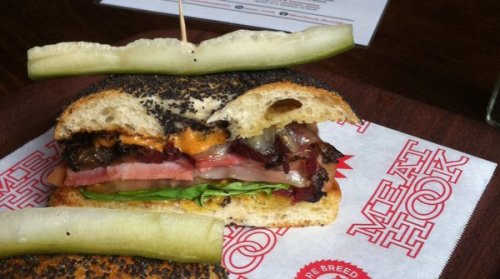 We feasted on their homemade pork and herb sausage with grilled onions served on a milk bun. Having recently tasted a sausage from a well-known online meat vendor, this was the complete opposite to the pale, tasteless item that was sent to me. This sausage had really good texture and was lightly spiced and tasty.

We moved on to taste their Meat Hook burger. CC and I were trying to guess what the description “3 cut patty” meant. Duncan explained that three different cuts of beef make up the burger. It was juicy and flavoursome. There was the thinest whisp of Swiss cheese that seemed to add little, but you just knew if it hadn’t been there, the balance would have been different. All the “sandwiches” in this section are served with homemade sauces. I must just give a mention to the bread. I love the attention to detail in sourcing bread that really matches the food including a potato and sesame roll for the burger. 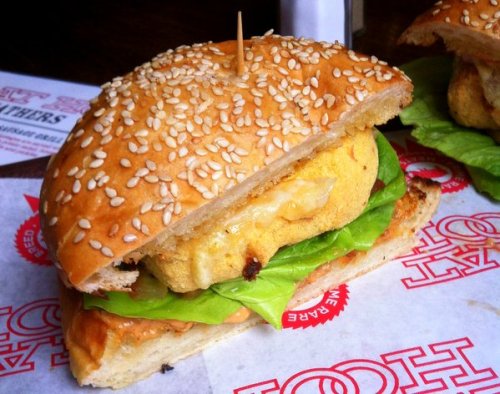 We were getting very full by now. We agreed that the New York Deli Sub had just a little too much beer mustard (which the guys have taken on board) and were very taken by the veggie option – a Macaroni burger which managed to be comforting, light and crispy all at the same time – no mean feat! How could I not mention yummy Cuban burger which features a big favourite of mine, pulled pork served on a bagel?

Our verdict? A huge thumbs up.

Mathers has the look and pedigree of a pub and it also serves as a Sport’s Bar. It’s located just a few metres from the busy junction at York Place near the tram stop, John Lewis, Playhouse Theatre and Vue cinema depending on your preference. Whilst you may want to avoid days when there’s a big match on, please don’t let the fact that sport is shown on the TV here put you off. This food really is something out of the ordinary.

Edinburgh Foody dined at Meat Hook at their invitation.