Swallow This by Joanna Blythman: ready-meals are not the only processed foods 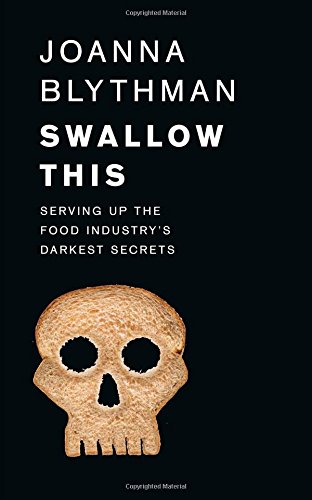 I was talking to my mother last weekend. We got on to how both our eating habits have changed, how neither of us would now use the powder sauces, cheap sausages and instant mash that I loved and she found so convenient when I was a child. She said: ‘It’s not just that they don’t taste as good as home-made, we now know about all of the rubbish that’s in them.’
‘That’s what I thought,’ I said, ‘but then I read this book…’

Joanna Blythman’s Swallow This sets out to teach us about ready meals and processed foods of all kinds. It’s an interesting read but I have a couple of issues with it.

Made in grandmother’s factory

Firstly, the premise of the book is that consumers buy ready meals assuming that they are healthy, hearty concoctions made in a small cottage somewhere by a benevolent patriarch who cares about their well-being. I find that level of naivety difficult to accept. I said this to mum. ‘I don’t know,’ she said, ‘I recently bought a ready-made potato gratin because it was made by the Persson Family, which sounded kind of home made. One taste and it was in the bin. I was taken in.’

It is true that packaging makes a difference and that it often tries to portray food as somewhat genuine or healthy. Higgedly quiches and pies look friendly and artisany while no one could ever believe that any supermarket’s own bolognaise is made anywhere but in a factory.

But consumers can read, and we do, both news and labels. There are a lot of things in processed foods that we don’t like to see on labels anymore: E-numbers, things that sound like chemicals, fat, and most recently, sugar.

As Blythman points out, even a clean-looking label can hide things in prepared foods that wouldn’t make it into the same meal if we made it at home. Why is this? Food is a business.

Again, I find the idea that processed foods should be made the same way that we make them at home unreasonable. Prepared foods have to have a good shelf-life, need to taste OK and have to process well. Normal ingredients often don’t. Factory processing is also hard on foods, removing colour, changing texture and dulling flavour. It all has to be put back again: flavourings, colours and texture compounds help make destroyed food palatable.

I find it difficult to be outraged by this. I don’t expect fat-free yoghurt to be made the same way and have the same ingredients as the full-fat version. How could it? Food producers don’t have magic wands. They have ingredients. And yes, those ingredients are very different from what you’d find in a home-cook’s cupboard.

When I cut an apple, it browns in minutes. Yet I can buy apple slices in fruit salad that have sat for hours, maybe days, without colouring. Obviously they’ve been treated somehow. And just as well: if they were brown, I wouldn’t buy them.

Blythman tells us that some vitamins are made from materials we wouldn’t consider food. Vitamins are chemicals. Personally, I think minerals and vitamins are best ingested as part of a natural foodstuff – a handful of nuts, a portion of veg, a piece of rare steak. A varied diet should give us what we need. But sometimes I take supplements (it’s a kind of superstition). Do I expect my vitamin C to be lovingly extracted from fresh raspberries? Selenium to be squeezed from Brazil nuts? No.

So I wasn’t shocked, amazed or horrified, but I learned a thing or two. Some of the things that don’t make it onto labels are left me feeling disappointed. I was interested to share Blythman’s experience of how coy the food industry is about its processes and ingredients. But then, if consumers really expect ready-made to be the same as home-made, I understand their reluctance to share.

I found out that ‘packaged in a protective environment’; doesn’t mean ‘put into a plastic bag in a silicon factory-style clean room’ as I had thought but ‘bagged with gas that prolongs shelf-life’. I didn’t know that but now that I do, I’m OK with it.

In fact, I was OK with most of what I read in Swallow This, which made me wonder who it was written for. It’s not aimed at me: someone who mostly eats home cooked foods, knows at least ten words for sugar and doesn’t expect ready meals to be made by a grandmother but by workers in a factory. Swallow This might be aimed at people who don’t cook, the masses of ready-meal consumers. But would you, if that was your steady diet, pick up a book that clearly sets out to put you off your feed?

I don’t think you have to be a foody to care about what’s in your food, where it comes from or how it has been processed. But I do think you have to be a realist about production methods. People want cheap food, shareholders want profitable companies. Economies of scale aside, ready-made will always tread a careful line between quality and price.

If you’ve haven’t thought much about how food is processed, Swallow This is an eye-opener. If you have, and you chose to cook most of your own food from scratch as a result, it will make you feel righteous.

Swallow This: Serving Up the Food Industry’s Darkest Secrets