I love people watching. Amy had been delayed so I sat in the bar at Hectors absorbing the atmosphere. It was an early Thursday evening and the place was packed.

Hector’s exterior beckons you in

Not uncomfortably so, just full of people enjoying a drink. There were groups that looked as if they were work colleagues; a dog trying very hard to get its owner to pay it some attention; mature ladies sat in the window gossipping, younger guys propping up the bar. No set target audience then! Strangely, there were very few people sampling the food whilst we were there. 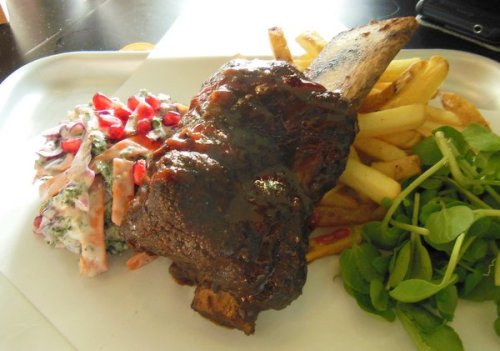 Hector’s high-end after-work pub grub was exactly what Amy and I expected. There was some imagination on the menu, with ‘small plates’ offering a good selection of snacks to absorb the pre-dinner beer, whilst the pub essentials of burgers and pie were untouched. We were delighted to see the mains were thoughtfully presented too, for once arriving on plates rather than in containers.

We were surprised by the emphasis on produce from England, not Scotland – sausages and Sunday roast pork from Suffolk and Kent and West Country rump steak and Cornish Brie for example. Perhaps we’re missing the back story somewhere? The mains were of a good size, we particularly loved the slow cooked British short rib with ginger ale ketchup that also appeared on the chicken wings. 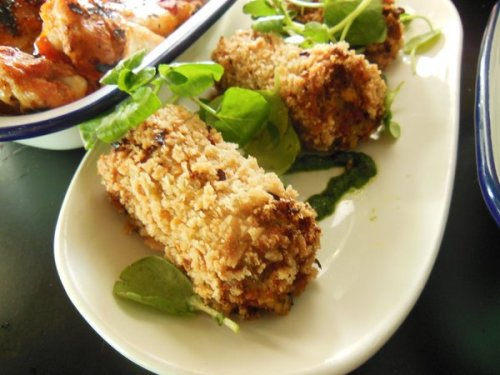 Of what we sampled, we felt the seasoning was a tad hit and miss. The padron peppers really were nothing but bitter, whereas the chicken wings’ ginger ale ketchup had real zing and sat on the right side of sweetness, a veggie option tomato, olive and roast vegetable croquettes with green chilli and pesto was fine, but again could have had a little more seasoning.

We finished our tastings with a large sundae glass of chocolate praline profiteroles with Jude’s salted caramel icecream and Devonshire (West Country again!) caramel sauce. Whilst we pondered who Jude might be, the dish was quickly devoured. A lovely sweet finish to the evening. 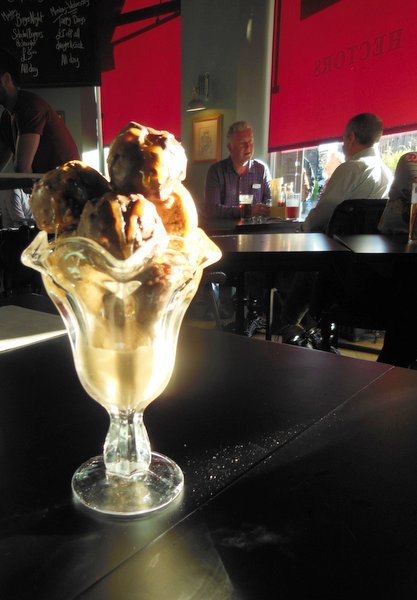 Profiteroles for two at Hector’s

The prices are reasonable and the menu a lot more interesting than the average, so we will risk the noise of a packed evening’s office banter and go back to try more.

Amy has her eyes on the flatbreads, salt and pepper squid and the poutine (a Canadian dish made with french fries, topped with a light brown gravy-like sauce and cheese curd). I rather fancy a mixed platter with Black Combe ham, scotch egg, olives and tomatoes, stout-cured salmon and toast.

Do check out their Burger Day on Mondays when you can get a drink and a burger with chips and all the trimmings for £9.

Danielle and Amy dined at the invitation of Hectors.