Vegan made easy – Happy Foods shows you how

Curious about vegan cooking? Carrie Mancini has been a vegan for years and found that a lot of people wondered what she ate. She decided to let people know and Happy Food vegan cooking videos are the result. I went to the launch at Hemma to snack on vegan canapés, have a glass or two of vegan wine and watch the first episode. 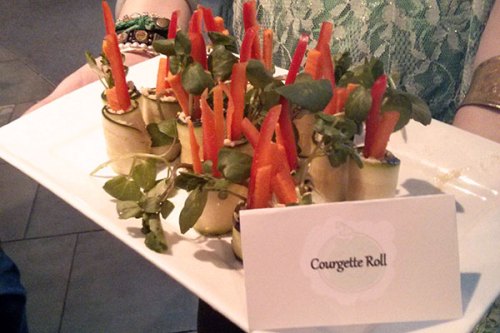 Courgette rolls – as pretty as they are fresh.

Our regular readers will know that my partner is vegetarian, and that, as a result, most of the food cooked and consumed in our household is too. In fact, a lot of our dishes are vegan since C. isn’t great with dairy. Or egg. In summer, when it’s warm, I like a salad, or a cool soup. On cooler days, I’m a fan of chillies, stews and pasta, all of which we regularly make without eggs or dairy. I’m telling you this not to boast about how nearly vegan I am, but to underline that there’s a lot of good vegan food out there and it’s not difficult to make. At the Happy Food launch, Carrie demonstrated this with a range of tasty snacks.

Some of the canapés were: 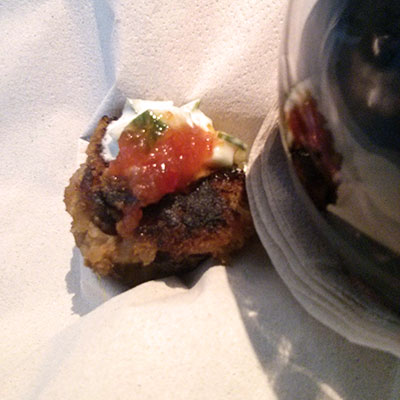 Look at that rice cake. Doesn’t it look yummy?

There were also a range of sweet canapés, from lemon meringue tarts to chocolate mousse, and lime curd pieces. How do you make these without egg or dairy, you ask? The curd uses vegan butter, so that’s an easy solution. The meringue is a whole different story. I was intrigued to find a new ingredient on the list: Aquafaba (latin for water bean) an egg white replacement. It is basically chick-pea water and can be used to make vegan meringues, mousses and similar sweets. I’ll be playing with it later, just for fun.

Hopefully, some of the recipes that we tried on the night will make it onto the site soon. (The lemon curd already is.)

Happy Food is not a professional television outfit, and the presenters are not actors. Keep that in mind and just enjoy the video. Carrie and Stan has brilliant fun and the recipes are easy, tasty introductions to vegan cooking. All the ingredients are straightforward and can be found in most larders and fridges. 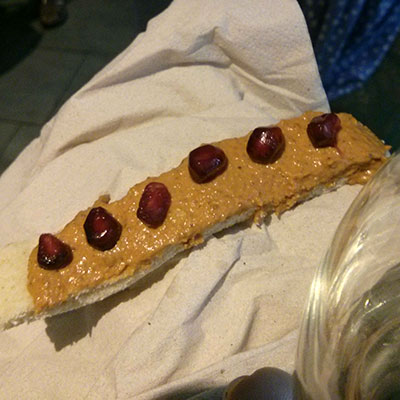 Muhammara was lovely and something I want to make at home.

Happy Food will be posting new videos and recipes regularly. Keep an eye on their Twitter or Facebook to find out what’s coming next.