We’re a vegetarian household so eating vegan for a week every month shouldn’t be that difficult. I already cook with oil, soya milk and gram flour instead of butter, milk and eggs. We eat vast amounts of pulses – what else is the slow cooker for? – and liven things up with stir-fries and pasta. Saying that, there are times when we get into trouble. 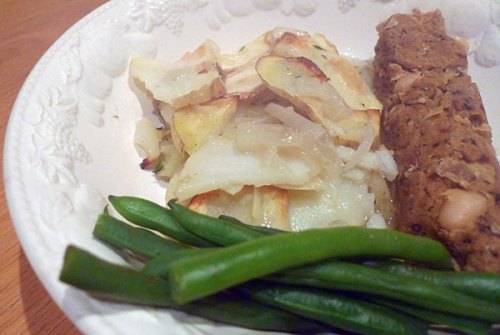 Edinburgh’s quite good for vegan and vegetarian options. If we plan ahead, eating out is a cinch. Spontaneous restaurant visits are a little more fraught. I also hadn’t factored in reviews when planning vegan week so I failed on day one.

On a vegan diet, it’s easiest to not drink. Gin and tonic is mostly safe, but beer and wine often aren’t and sometimes, you can’t find out. C had a dry month, so it was easy for him. I settled for a mostly dry week and did some research on our usual tipples.

My standard breakfast is kefir or Greek yogurt with cereal and fruit. As I’m not a fan of soya milk on its own, and don’t like Alpro yogurt, I had to change my breakfast habits. Luckily, I swap about what I eat for breakfast fairly regularly, so I won’t suffer cereal pangs after a week on soda bread toast or porridge. And if I do, I can have it with grapefruit juice (which makes C gasp in horror but I really like). 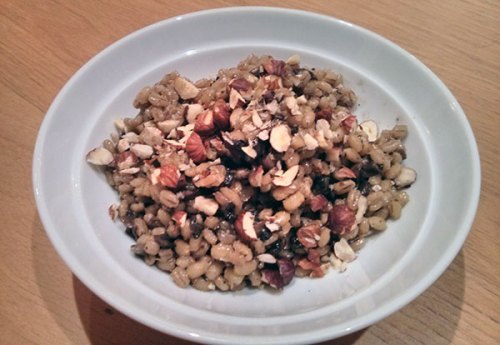 It might look like porridge, but it isn’t. Mushroom orzotto is very brown, even with crunchy hazelnuts, which is why I serve a carrot salad on the side.

We’re not eating vegan for ethical reasons but purely because it’s better, from a health perspective, for a dairy-intolerant vegetarian. And it’s an interesting challenge. Failing isn’t a big deal. Still, I hope to do better next month. How will I achieve that?

I like to plan the week’s menus ahead of time so I know what to buy and when to cook what. For a relatively lazy household, like ours, where the barrier to deciding to eat out or have food delivered is very low, having something in the slow cooker or oven helps us stick to the cheaper path of eating what we have. Which also makes it easier to eat vegan.

Last year I wrote a beginner’s vegetarian cookbook for a friend. Easy Eating is aimed at people who don’t cook and have very little experience in the kitchen. It now contains most of my standard recipes. All of the recipes are vegetarian and many are also vegan, including soda bread and cake. When I’m short of inspiration, I go there to remind myself that there are more than three dishes in my repertoire. The vegan sausages are very handy. 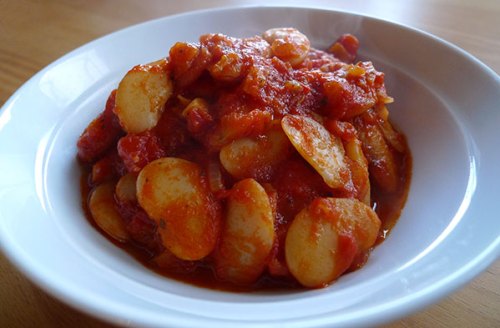