VDeep is a collaboration between the team behind the Vintage and Hardeep Singh Kohli, the broadcaster and writer. It brings together artisanal beer with curry, two Scottish favourites. (Amy will give us a full review in a few weeks.) As well as serving beer and food, VDeep will be running regular chilli challenges. I went to the inaugural one to watch six bold men eat chicken wings of increasing heat. Who would win? 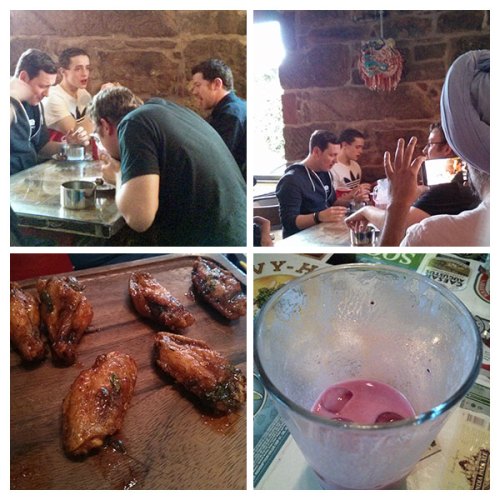 Round 4: the contestants are feeling the heat; wings and lassi

Eating contests are odd things. Part of me enjoys them tremendously, but another part thinks they are wasteful and decadent. I shut that part away, served myself some very tasty pork cheek vindaloo (hot, but not too hot, sour and fragrant) and dhal, took a swig of IPA and settled down to watch the games.

Are you tough enough? The Deep Heat Chilli challenge

This is the format: six people sit down to eat. There are five levels of heat. Four chicken wings in each heat. The first round aren’t very hot at all and are served as a warm-up. The second level are hot – see below – and it only gets hotter from there. The contestant to first finish his wings puts his hand up and is automatically through to the next round. The last to finish is out. Between heats, contestants quench their burning mouths with lassi.

Heats four and five were really exciting. At this point, contestants were sweating, shaking their heads, gasping. Apart from the future winner who stolidly munched and looked to deal with the heat really well. In heat four we had a resignation! There was much clapping and hooting from the audience, who had by now picked their favourites, and enthusiastic pompom waving from the resident cheerleaders.

The winner, the last person standing, took away a beautiful chilli bouquet and a flattering crown and sash combo. The contestant from my table did us proud by coming second.

Then we were offered wings at number 2 strength. I like chilli. I don’t like things as hot as C. does, and I don’t like it when a dish is so hot with chillies that I can’t taste the rest of the ingredients. But I’m game for a challenge and had a wing. It was tasty. So I had another one.

Chilli is that it builds. It got hotter with every wing and after three my very lips felt bruised. That’s how chilli works, of course. It makes the surfaces of our mouth, tongue and lips super-sensitive, as if hurt or inflamed. (Thought less so if you eat a lot of it.) I crunched ice and rubbed my tongue against it to scrape the irritating chemicals off it. Too bad I’d drunk most of my raspberry lassi before the wings arrived. There’s a lesson in there.

Deep heat chilli challenges will run once every quarter. They won’t always feature the same eatable: chilly pakoras, anyone? Check out the website to find out when the next one is.