At 56 North, a bar well known for its vast array of gin offerings, I was invited to attend the launch of the world’s first Scottish Cider Brandy.

Strathearn Distillery (probably Scotland’s smallest distillery™) and Scotland’s original cidermaker, Thistly Cross Cider, have joined forces to create this unique cider brandy, although whether it can be thus labelled, is another question to ponder. Pre Referendum, its creators were taking a risk with labelling it thus, coming up against EU rulings, but now we know the outcome of this vote, Tony Reeman-Clark’s desire to call it ‘cider brandy’ might be moving in the right direction. 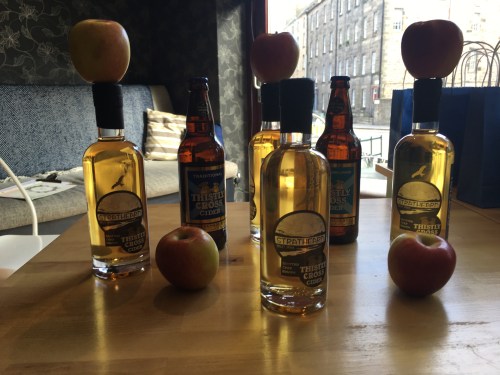 It might not have seemed the obvious place for the launch of this new spirit but Strathearn Distillery, as a young distillery, only established in October 2013, is producing a range of highly acclaimed Scottish gins, experimenting with innovative production techniques and flavour profiles, whilst its first batch of three year old whisky matures.

The ingredients in the spirit were sourced locally from the Scottish countryside and made into cider at Thistly Cross in East Lothian before being sent to Strathearn Distillery in the heart of Perthshire to be transformed into the final spirit.

As founder of Strathearn Distillery, Tony Reeman-Clark explained, “Distilling cider was something I’d always been interested in, so I applied for a cider licence when I built the whisky distiller, just in case.”

With an entrepreneurial spirit, this was foresight indeed and I’m sad that Tony never finished his tale of his rise into drinks from a background in computing.

A train journey that Reeman-Clark took seems to have been the spark of inspiration for the joining of two artisan producers to create this Scottish Cider Brandy.

Passing Thistly Cross on the train, he hadn’t realised that there was a cider maker in Scotland, “so from that point, everything clicked into place”.

Nor had I for that matter but then I’m not a drinks’ producer or an entrepreneur!

A few months later, Peter Stuart, Head Cider Maker at Thistly Cross Cider and Reeman-Clark bumped into each other at an event in London and that’s where the cider brandy journey began.

For the uninitiated, grape brandy is distilled from the mash, juice or wine of grapes. Fruit brandies are made from any fruit—a classic example is Calvados, a brandy made from apples, produced in the Calvados region in Normandy and an area with a strong cider making heritage. Pomace brandy meanwhile, such as Grappa, is distilled from the pulp and skins left over after wine production.

Traditionally Scotland hasn’t been thought of as a big producer of cider but this perception has changed in recent years. This, along with Scotland’s world-renowned spirits industry, spurred them on to try something new.

Apples start off by being pressed on a traditional apple press resulting in a crisp apple juice, which is then slowly-fermented with a mixture of champagne yeasts before being matured for a minimum of six months, producing a medium-sweet cider.

The cider then made its way to Strathearn Distillery to be transformed into the final spirit. The cider was then passed through copper stills, Bella and Erin, handcrafted in Portugal, emerging as a cider spirit.

Distillation enhances the alcohol content of the spirit, with the distillation process and the copper of the still causing chemical reactions, leading to subtle changes in aroma and flavour.

The spirit then spent the rest of its days quietly resting in oak casks. Unlike Scotch whisky, which tends to be matured in second hand casks from the bourbon and sherry industries, cider brandy is matured in virgin oak. Out of the four casks, which were filled, two were American white oak, whilst two were European red oak.

So what do they actually taste like. There was a subtlety in colour between the two, which were served in stylish branded ISO 65 tasting glasses, the type you normally find at wine tastings.

The American white oak was brimming with vanilla, lending a sweetness that complemented the soft fruitiness of the spirit, whilst the French red oak was packed with tannins, giving a spicy richness and depth, with a hint of raisins and candied fruits and a more rounded mouth-taste. For now only 200 bottles are available. Two more casks are patiently holding the remaining spirit, with plans to be bottled in due course. So you’ll have to move quickly as this small single cask batch isn’t going to hang around for ages. Priced at £45 per bottle, it will be available in bottles all individually numbered, making it a unique product and available from small, independent drinks merchants and online at Strathearn Distillery.